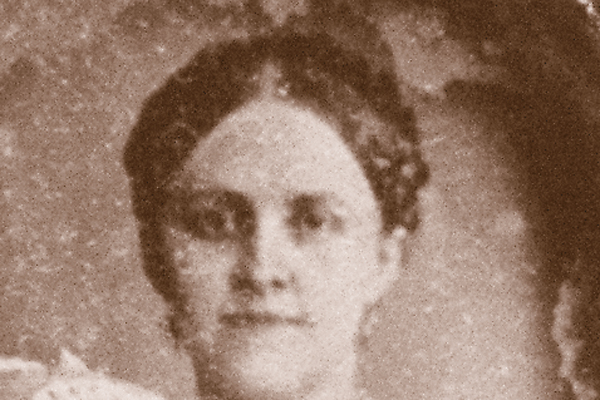 “It makes little difference … where one opens the record of the history of the Indians; every page and every year has its dark stain….

“Neither time nor place makes any difference in the main facts. Colorado is as greedy and unjust in 1880 as was Georgia in 1830, and Ohio in 1795; and the United States Government breaks promises as deftly as then, and with an added ingenuity from long practice.”

Both women are nearly forgotten today, although their mutual struggle is one of the most endearing stories to come out of the Old West.

Bright Eyes (sometimes called Susette) was born in Nebraska in 1854, the eldest daughter of Omaha Chief Joseph Iron Eyes La Flesche. She would accumulate several remarkable milestones in her 48 years:

Is it any wonder that when Henry Wadsworth Longfellow—then an elderly man long famous for his epic poem Hiawatha—met Bright Eyes in Boston, it is said he took her hands in his and declared, “This is Minnehaha!”

But she was no romanticized version of Indian womanhood; she was a clear-eyed civil rights leader. She once wrote that whites were like a “hugh plough” that had turned down “into the darkness of the earth every hope and aspiration which we have cherished.”

Bright Eyes was on her way to Congress when her Boston appearance ignited Helen Hunt Jackson, then a “freelance writer of little note,” as historian Dorothy Gray describes her in Women of the West.

“From her association with Bright Eyes, the writer was inspired to her life’s work,” Gray writes. “Immediately she began to publish attacks on the policies of the ‘Indian Ring’ in Washington. Ceaselessly she pounded away in column after column in the New York Herald, detailing with hard facts and thorough research the long infamy against the Indians.”

She was born Helen Maria Fiske on October 14, 1830, in Amherst, Massachusetts, the daughter of a language professor. She is described as brilliant by some, and although not beautiful, she dressed fashionably. Her biographer Valerie Sherer Mathes notes a friend described her as “a captivating woman because of her sweet and gracious womanhood, her capacity for love and friendship, her deep sympathy and her immense tenderness.”

By the time she was inflamed to fight for Indian justice, her husband and two sons had died. To escape her tragedies, she wrote poetry, admired greatly by Ralph Waldo Emerson, who called her the “greatest American woman poet.” She later married William Jackson and moved with him to Colorado Springs, Colorado, but she missed the excitement of the East and was on a trip to visit friends in 1879 when she attended the Boston lecture where Bright Eyes and others told their sad stories.

Helen’s landmark first book, A Century of Dishonor, was published in 1881 and is still in print. “No other book had such an impact on the tender consciences of the American people, and none accomplished so much on behalf of a sizeable minority,” historian Ray Allen Billington said.

Helen said she wrote it to expose the “national shame” of America’s treatment of Indians, maintaining a great faith in the people’s sense of fairness. With great detail, and often quoting from official government reports and commissions, she details all the broken promises, the cruelty, the graft and corruption.

For instance, she quotes these harsh words from President Grant’s 1869 Commission on Indian Affairs: “The history of the Government connections with the Indians is a shameful record of broken treaties and unfulfilled promises. The history of the border white man’s connection with the Indians is a sickening record of murder, outrage, robbery and wrongs committed by the former, as a rule, and occasional savage outbreaks and unspeakably barbarous deeds in retaliation by the latter, as the exception…. Every crime committed by a white man against an Indian is concealed or palliated. Every offense committed by an Indian against a white man is borne on the wings of the post or the telegraph to the remotest corner of the land, clothed with all the horrors which the reality or imagination can throw around it. Against such influences as these the people of the United States need to be warned.”

Helen so believed in her Century of Dishonor that at her own expense, she distributed a copy to every member of Congress. And her tongue proved as fiery as her pen—she delighted in debating those who tried to cover up or debunk her research.

Helen spent the last six years of her life, until her death in 1885, with such focus, she once said, “I shall be found with ‘Indians’ engraved on my brain when I am dead. A fire has been kindled within me which will never go out,” biographer Mathes notes.

If she’s remembered at all, it’s for her novel, Ramona, which she hoped would do for California’s Mission Indians what Uncle Tom’s Cabin had done for black slaves. (It didn’t.) But historians are again discovering the power of her words and her tireless research to champion a cause.

She was outlived by Bright Eyes, who married a white news reporter named Thomas Tibbles, himself a crusader for Indian justice. They toured Europe, telling their stories of injustice, and in 1878, she illustrated a book on the Omahas. Her work helped secure passage of the 1887 Dawes Act. For awhile, she worked with Tibbles as a news correspondent in Washington, D.C., during which she covered the battle of Wounded Knee. But she wasn’t happy away from her tribal lands and returned home to farm. There she died in 1902, leaving an impressive legacy in her fight for civil rights.