The Massacres at Skeleton and Guadalupe Canyons 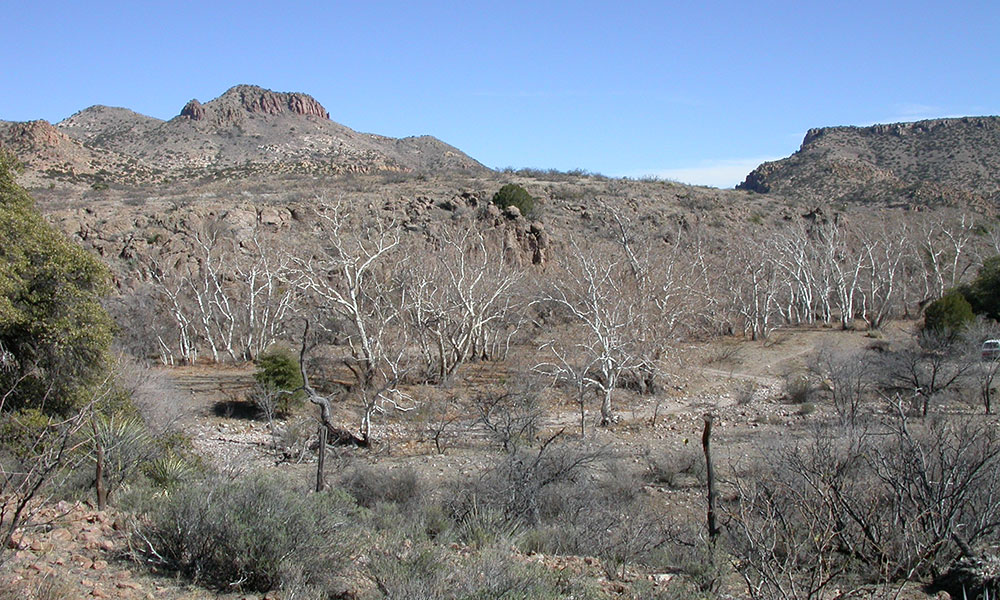 After Mexico increased taxes on alcohol and tobacco in the late 1870s, smuggling became big business.  Mexican smugglers exchanged silver and gold in Tombstone, Tucson and other trading posts for alcohol and tobacco to sell below border. The smugglers became easy prey for the cow-boys. It’s not known how many northern bound smugglers were robbed or how much loot was taken since both parties were in violation of the law but no doubt the amount was substantial.

Skeleton Canyon and Guadalupe Canyon both lie in the Peloncillo Mountains, which lie along the Arizona-New Mexico border just north of the Mexican border.

The canyons were the scene of two massacres between the Cochise County Cow-boys and the Mexican Rurales. It’s difficult to sort out the details because the facts between the two have been intertwined.

The first occurred in July, 1879 after a band of Cow-boys had been raiding in Sonora. The military commander in the area, Francisco Neri sent out a detachment of Rurales led ty Captain Alfredo Carrillo. They picked up the bandits trail and followed it into Skeleton Canyon. The canyon connected the Animas Valley of New Mexico with the San Bernardino Valley in Arizona.

Upon entering the canyon the Cow-boys set up an ambush, killing all but three.

The second was two years later, on the morning of July 27th, 1881, Curly Bill Brocius, learned that a party of Mexican silver smugglers were bringing a pack train into Arizona through Skeleton Canyon. Brocius, Johnny Ringo and Jim Crane, along with some twenty Cow-boys who had been raiding in Sonora attacked a party of smugglers thirty miles south of the border and stole $2,500 in gold and silver coin, along with some $1,500 in livestock, merchandise and mescal. Four Mexicans were killed. A few survivors made it back to Sonora where they reported the incident to Commandant Felipe Neri at Fronteras. Mexican authorities describing the killers at “Texan-Cow-boys.”

Growing bolder, about two weeks later the cow-boys robbed another smuggler train, this time near Charleston on the San Pedro River, killing one man and taking a thousand dollars in gold and silver coin.

The Tombstone Epitaph, on August 13th, 1881 wrote: “When the civil authorities are insufficient or unwilling to protect a community the people are justified in taking the law into their own hands and ridding themselves of the dangerous characters who make murder and robbery their business. It remains to be seen how much longer such damnable acts as the Fronteras Massacre and San Pedro murders shall go unpunished.”

The raids south of the border didn’t always pay off for the cow-boys. At least once the smugglers fought back and paid for it in blood.

A few days later, on August 12th, Old Man Clanton and six others were taking a herd of stolen Mexican cattle, heading them north through Guadalupe Canyon. Captain Carrillo, leading a force of fifty Mexican Rurales were hot on their trail, crossed the border and continued following them into the canyon.

The rustlers, believing the Rurales wouldn’t continue the pursuit, stopped to make camp about a hundred yards north of the border. Later that night they were joined by Jim Crane, one of the outlaws wanted for robbing the Benson stage a few months earlier. More recently Crane had been riding with Brocius and Ringo during their forays into Sonora.

Two of the rustlers awoke during the night when they heard the cattle getting restless and suspected a bear was close by. Moments later gunfire erupted killing Clanton, Billy Lang, Charlie Snow, Dick Gray and Jim Crane. Only two men, Harry Ernshaw and Bill Beyers though wounded, managed to escape.

This put a lid on the Cow-boy raiding into Mexico for a spell. They turned their attention to rustling cattle from the ranches in Arizona.