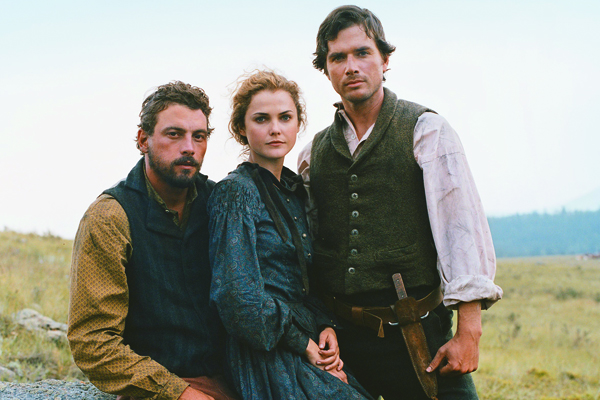 Already TNT is promoting its summer miniseries Into the West as a historically accurate saga that will tell both sides of the American frontier.

Of course, it’s easy to be cynical in this day and age, and I can’t help but remember talking to a movie producer back in 1982 during the running of NASCAR’s Southern 500.

There have been so many bad films about NASCAR, the producer told me while shooting footage for the movie he was backing, but his flick was going to go deeper, tell the true story about stock car racing, show the camaraderie and esprit de corps you’ll find along pit road. Sounded good to me, only the movie turned out to be a Burt Reynolds-Loni Anderson-Jim Nabors train wreck called Stroker Ace, about as authentic as Elvis Presley’s Speedway and even less exciting than listening to Cale Yarborough’s crew chief wax poetic about camber and gear ratios.

So I was a little bit skeptical that any Hollywood effort could combine history and entertainment. Hey, it’s tough to do. Gods and Generals and Son of the Morning Star got the history down perfect, but try watching either without a gallon of espresso. Little Big Man and Conagher certainly entertained, but most history professors would have given them a C-, if that. And telling both sides of the story—an unbiased, unwhitewashed viewpoint from white settlers and Lakota Sioux? Tough assignment. Movies, whether Dances With Wolves or The Searchers, typically limit viewpoints.

Then I visited one of the Into the West sets, placed outside of Santa Fe, New Mexico, for a day of shooting in February. For a moment, I was at Promontory Point, Utah, watching the celebration of the completion of the Transcontinental Railroad.

Among actors, producers, writers, just about everyone involved, there’s an energy about Into the West, a sense of pride and accomplishment. Driving back into the 21st century late that afternoon, I began thinking TNT might just pull this thing off.

In a nutshell, Into the West is a six-part, 12-hour miniseries from DreamWorks Television and Executive Producer Steven Spielberg, scheduled to debut June 10. Filmed in Calgary and New Mexico, Into the West follows generations of two fictional families—the Wheelers, Virginia wheelwrights moving westward, and a Lakota clan caught in the clash of cultures—from the early days of westward expansion to the final conflict at Wounded Knee.

“Steven Spielberg asked me to do something that might resonate in history,” says Executive Producer David A. Rosemont, who won a Western Heritage Wrangler Award for the TNT movie Purgatory and an Emmy for Door to Door.

“I don’t have anything to prove,” Rosemont says. “This is basically a dis-posable business, but Into the West has an opportunity to have some sort of legacy. We can get a glimpse into history and offer a true, balanced story.”

History drew screenwriter Kirk Ellis to the assignment. “I have a background in history,” says Ellis, currently adapting David McCullough’s Pulitzer Prize-winning biography John Adams into a 10-part miniseries for HBO. I’m married to a history teacher, so working on projects like this is like getting paid to go back to school.”

Ellis wrote Episode 4, “Hell on Wheels,” which covers the building of the Trans-continental Railroad and the displacement of the Lakota and Cheyenne, including the massacres at Sand Creek and Washita.

DreamWorks and TNT insist “that we not play fast and loose with the facts,” says Ellis, who also serves as historical consultant for the entire miniseries, “and I frankly love that.”

But everyone remains keenly aware that a miniseries, first and foremost, must entertain.

“We’re not doing this as a series of historical tableau: Famous Scenes from the West,” Ellis says. “This is about ordinary families on both sides whose journeys through 60-70 years of Western history is woven into this tapestry of what actually happened.”

Having several directors and writers can be a challenge. “The trick, I think, in a multipart miniseries like this (where you have more than one writer responsible for every night) is consistency,” Ellis says. “You have to work in tandem with the other people on the team even though you’re not actually writing their scripts, and they’re not actually writing yours, to understand where things are leading.”

Yet Into the West goes beyond the cast, directors and writers. TNT brought in historical photographer Rob Gibson to shoot everything from daguerreotypes to glass plates, and lured James Clark out of movie retirement in Tombstone, Arizona, to handle the railroads and steam engines.

“They’re making a real effort to try to be accurate,” Clark says, “especially in the look.”

Charlie White Buffalo was hired to translate scripts into Lakota and work with actors on dialogue. What impressed him most, however, was the depiction of his people.

“We’re not trying to show the people as victims,” he says. “We’re trying to show the Lakota people as a culture that has survived and is flourishing. This movie is showing, yes, the Lakota were ferocious warriors but then they were also family men. They took care of their families but they also took care of other people in the tribe. We’re not trying to put the Lakota people as a holier than thou people, they are good people but they also had conflicts within their own people.”

Nor is Into the West only about white and Indian stories. Episode 4, for instance, includes Garrett Wang playing a Chinese emigrant working on the railroad.

“It shows the discrimination the Chinese had to face,” Wang says. “They had so many limits and restrictions. They could only work in certain trades, could only live in one section of town, often in absolutely horrid conditions. They were promised fortunes beyond their imagination—in fact, the Cantonese word for America and San Francisco, gamason, means Gold Mountain. But the Chinese were quite resourceful.”

After being kicked off his gold claim, Wang’s character, Chow Ping, lands a job as a demolition expert on the Central Pacific.

Christian Kane, part Cherokee himself, plays half-white, half-Lakota loner Abe Wheeler, a one-time Pony Express rider who feels a sense of belonging for the first time during the building of the railroad. Kane has just finished shooting the Promontory Point scene, where he’s run off, along with Wang and other workers, so the photographer can take a picture of the meeting of the railroads.

“That’s my favorite scene in this whole show,” he says. “The persecution of the people who busted their asses to build the railroad only to be shuffled out. You see what it was like back in those days and wonder if we’ve changed all that much.”

Lance Henriksen plays patriarch Daniel Wheeler. “These were hard times in the West, and I’m just a hard-working guy following the right of way, so I’m part of the ecological disaster which is Hell on Wheels.”

Episode 4 director Watkins, feeling like a cowboy while riding Tommy Lee Jones’ horse from The Missing and sitting on Kevin Costner’s saddle from Wyatt Earp, calls Into the West a “communal effort,” partly out of necessity and partly because of a dedicated cast and crew.

“Telling both sides has been less challenging,” he says, “because everyone is embracing the history of what’s going on.”

While TNT officials won’t comment on the budget—“it’s bigger than a bread basket,” Rosemont says—Into the West is the network’s most expensive project ever.

“I don’t think our projection of history should be framed by reality shows,” Rosemont says. “The classic Western film is a classic morality tale, but Into the West tells a story about the West so there are no clichés. Everything’s researched to the nth degree. It’s historically correct, and everybody involved has a love of it.”

Of course, Kane points out that every actor in the world wants to do a Western. He’s no exception. He costarred with Tom Selleck in TNT’s Crossfire Trail.

“Your makeup is dirt,” he says. “I don’t think you get into character more than when you’re doing a period piece. Westerns are fun because my Southern accent gets to come out.”

Filming Into the West has been especially pleasing for Wang.

“Are you kidding?” he asks. “I spent seven years on Star Trek. I don’t have to come to work on a starship and wear that uniform. Even when the crew went to Earth or somewhere, I was the one that had to stay on the ship. I get to work outside. This is great.”

Will Into the West be great? It certainly has the potential.

“That’s what good drama is,” Rosemont says. “Knowing people, but this is so much more than successfully re-creating history. It’s one of the biggest projects in the history of television, and I think one of the most important, along the lines of Band of Brothers.”