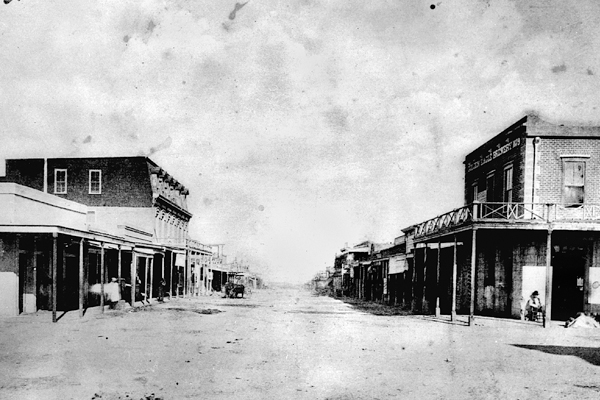 Three days past Christmas, in the chilly night air, Virgil Earp steps from the Oriental Saloon, hobbling slightly from a calf wound he re-ceived during the Fremont Street fight.

As midnight approaches, Virgil crosses Fifth toward the Golden Eagle Brewery. When his silhouette lights up the saloon windows, multiple shotguns roar from across the street. The spraying buckshot splinters the windows, awning post and east wall of the saloon. One load hits Virgil above the left hip and another shatters his left arm above the elbow.

Incredible as it may seem, Virgil keeps his feet and staggers back across the street to the Oriental. He reaches his brother Wyatt, who was investigating the explosions he had heard. Virgil collapses in his brother’s arms. Wyatt and others help Virgil to his room at the Cosmopolitan Hotel. Two doctors are summoned.

From February 17, 1880, to January 14, 1887, George W. Parsons chronicled his stay in Tombstone in a daily diary that has been invaluable to Tombstone researchers. While Parsons recuperated from an injury he sustained during a July 1881 fire (which took out the Oriental Saloon and the buildings across the street), he stayed in Dr. George Goodfellow’s office above the Golden Eagle Brewery, where he wrote the entries for December 28-29, 1881.

Tonight about 11:30 Doc G [Dr.  Goodfellow] had just left [his office above the Golden Eagle Brewery] and I thought couldn’t have crossed the street—when four shots were fired in quick succession from very heavily charged guns, making a terrible noise and I thought were fired under my window under which I quickly dropped, keeping the dobe [adobe] wall between me and the outside till the fusillade was over. I immediately thought Doc had been shot and fired in return, remembering a late episode and knowing how pronounced he was on the Earp-cowboy question. He had crossed [the street] though and passed Virgil Earp who crossed to west side of 5th [Street] and was fired upon when in range of my window by men, two or three concealed in the timbers of the new two story adobe going up for the Huachuca Water Co. He did not fall, but recrossed to the Oriental and was taken from there to the Cosmopolitan, being hit with buck shot and badly wounded in left arm, with flesh wound above left thigh. Cries of “There they go,” “Head them off,” were heard but the cowardly apathetic guardians of the peace were not inclined to risk themselves and the other brave men, all more or less armed, did nothing. Doc had a close shave. Van and I went to hospital for Doc and got various things. Hotel well guarded, so much so that I had hard trouble to get to Earp’s room. He was easy. Told him I was sorry for him. “It’s Hell, isn’t it!” said he. His wife [Allie] was troubled, “Never mind, I’ve got one arm to hug you with,” he said.

Got to bed about 2 a.m. Crowds this morning looking at buck shot and bullet marks on the walls. I was just retiring, taking off stockings—when firing commenced and dropped under the window. A bullet passed very close to me striking near the window, probably passing within a foot or two of my position. Longitudinal fracture, so [Virgil’s] elbow joint had to be taken out today and we’ve got that and some of the shattered bone in room. Patient doing well. It is surmised that Ike Clanton, Curly Bill [Brocius] and [Will] McLaury did the shooting. Bad state of affairs here. Something will have to be done.

Suspicion immediately pointed to Will McLaury as one of the shooters (see Parsons’ journal entry). But Will, the attorney and brother of Frank and Tom (both killed in the October street fight), had left Tombstone two days earlier to return to Fort Worth, Texas, his home.

However, rumors have circulated ever since that Will had offered a reward for the Earps’ dead bodies (some say $500 per Earp). On April 13, 1884, Will wrote a letter to his father in which he inferred that the only good that ever came out of all the money he spent after his brothers were killed was?Virgil’s attempted ass-assination and Morgan’s murder.

Wyatt Earp later claimed that Virgil saw Frank Stilwell “go into the vacant building just as he was coming out of the Oriental.” However, this report came after the Tucson train station killing of Stilwell (Wyatt killed him on March 20, 1882), and a case could be made that the Earps were stacking evidence against Stilwell to justify his killing.

Bucking all the odds, Virgil Earp survived his terrible wounds. After his brother Morgan was shot down in March, Virgil and his wife Allie left Tombstone for the Earp family home in Colton, California. Acting as their escorts, Wyatt, Doc and others found Frank Stilwell at the Tucson train station and killed him (see Classic Gunfights, May 2005).

Recommended: Classic Gunfights Volume II: Blaze Away! The 25 Gunfights Behind the O.K. Corral. The  forthcoming book?will premiere on September 30 at the Cowboy Legacy Gallery in Carefree, Arizona.