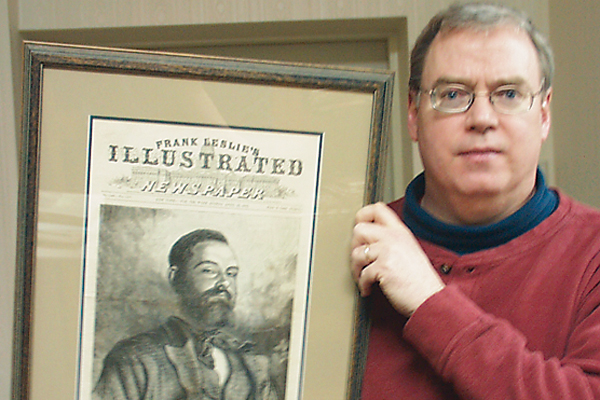 Over a quarter of a century ago, Timothy Hughes had had it with coin collecting.

He wanted a collectible that hadn’t been exploited yet, and one day, a flea market find opened his eyes. Tim spent four hours reading an 1846 Philadelphia newspaper that he had bought for three dollars. When he realized he could’ve bought a coin for five times that and not have gotten as much enjoyment out of it, the wheels began turning in his head. A collection that first started in the basement of his home has grown into a business in South Williamsport, Pennsylvania, that had sales of over $750,000 last year alone. Suffice it to say, the business was worth quitting his job as vice president of operations for Little League Baseball in 1998.

Timothy now consults with the company’s new president Guy Heilenman, a former educator who hopes to take the company’s private collection on tour to libraries across the nation. Included in their one-million plus collection are some wonderful Old West finds: Volume One of The Californian (November 7, 1846)—the first newspaper in California; Iapi Oaye (May 1, 1871)—first issue of this Indian language in the Dakota Territory; and Denison Daily News (August 15, 1876)—front-page story on the death of Wild Bill Hickok.

Although those issues aren’t available for sale, plenty of collectible Old West newspapers are. You’ll find among the company’s available items a news report on bandit Tiburcio Vasquez in The San Diego Union; Baseball scores in Galveston, Texas, in the Flakes Daily Bulletin; cocaine habits in California’s The Weekly Shasta Courier; Sitting Bull saying Spotted Tail’s death was a “fitting end for a fool” in the Scranton Republican; and a front-page report on the death of Jesse James in The Cuba Patriot. With the nation’s largest Old West newspaper collection, the company’s likely to have what you want.

Some issues are offered for as little as $25 since word hasn’t yet gotten out about the importance of newspaper collecting.

Visit www.rarenewspapers.com and grab your chance to own some firsthand history before the prices go up.