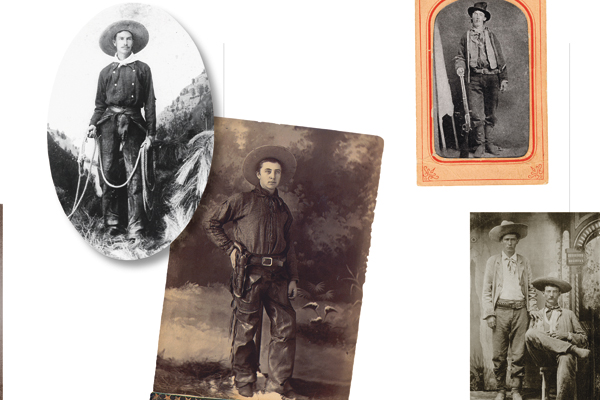 The cowboy is the most popular American folk hero, readily recognized all around the world.

But many would be hard put to name any working cowboys of the Old West.

Most probably wouldn’t think of Billy the Kid, although he was a cowboy for much of his short life. This cowboy rustled a bit on the side, and he also became a more-or-less hired gun in the Lincoln County War. Up to his death, the Kid continued to be a cowboy, turning again to stealing horses and rustling cattle rather than working for wages. Other part-time cowboys included John Wesley Hardin and Sam Bass, but like the Kid, they’re mainly remembered as outlaws.

Those who have been most instrumental in carrying on and enhancing the romance of the Old West cowboy are rodeo and movie stars. Featured in art, movies and TV shows, these cowboys have introduced a mental picture to millions in the last century, but is the image accurate for a real cowboy, or has it been distorted by the media?

The best answer is found as a direct result of cowboy pride. Old West cowboys loved to dress in their best outfits and pose for photos. Cowboy photos were frequently taken at a photographer’s studio in a nearby town or in a cowtown at the end of the cattle trail. Occasionally, a traveling photographer captured a cowboy in his ragged working clothes. Since the heyday of the open range and trail driving cowboys was from the late 1860-80s, their photos are tintypes, cartes de visites (CDVs) and cabinet cards.

Let’s have a look at some photos of real cowboys, when they were in their prime and creating the legend admired even today. You can then compare these genuine cowboys to your favorite cowboys from the movies,  paintings and TV shows to see if the “star” cowboys pass the test.