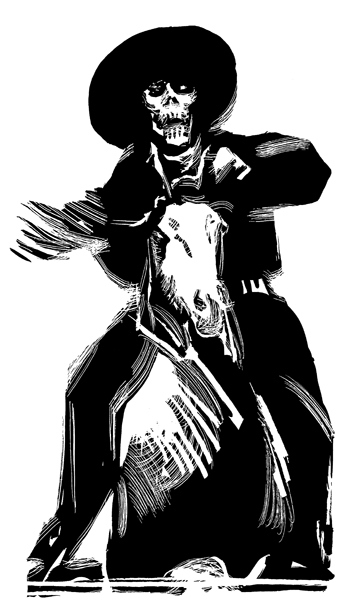 Curly Bill Brocius is holding court in Galeyville, Arizona, with his cow-boy cohorts.

Jim Wallace, a veteran of the Lincoln County War, rides up on a chestnut horse with a white-striped face, dismounts and joins Brocius and friends on the porch of a saloon.

While the cow-boys catch up on the latest news, local constable Goodman comes down the street, notices the horse and asks Wallace where he got it. Insulted, Wallace pulls his pistol and shoots at the ground near Goodman’s heels, saying as he does, “If you want that horse more than I do, take him.” The lawman quickly leaves in the midst of laughter, and the cow-boys think it is all great sport.

Deputy Sheriff Billy Breakenridge, who is in town to serve attachment on a store that has gone out of business, walks past the saloon when Wallace comes out and confronts him, asking if he, too, is after “that horse.”

“No,” Breakenridge replies, “I am riding a better horse than that.”

Wallace reaches for his revolver, but Breck (as his friends call him) quickly pulls out his pistol from his waistband and jams it into Wallace’s stomach, and with his other hand grabs the cow-boy’s gun hand, overpowering him.

Rather than arrest him, the deputy returns Wallace’s pistol and exhorts him to stop making a fool of himself. Leaving Wallace behind, Breck enters the saloon and buys a round of drinks for the boys. With things back under control, Breck leaves to finish the inventory at the store.

After hearing what happened on the porch, Curly Bill demands that Wallace bring Breck back to the saloon for a public apology. Humiliated, Wallace does as he is told. Curly Bill is unsatisfied with the apology, however, and threatens to shoot Wallace’s horse.

The cow-boys then take up residence at another saloon, Babcock’s. After more abuse from Curly Bill, Wallace decides it is a good time to leave.

Soon after Wallace’s departure, Curly Bill leaves the saloon. While Curly Bill mounts his horse, Wallace steps forward and shoots at point blank range. The bullet hits Curly Bill in the neck and passes through his cheek, taking out a tooth as it exits his jaw.

Hearing the gunshot, Curly’s pards quickly come outside and disarm Wallace. Others carry the cow-boy leader to a nearby doctor’s office.

“Billy, someone shot me,” Brocius says to Breck, who has heard the shooting and came to investigate. “Who was it?” the outlaw asks.

Breck says he doesn’t know, but he assures Curly Bill he will find out. Walking up the street to Babcock’s corral, the deputy finds Wallace, disarmed and surrounded by cow-boys who want to lynch him.

Breck arrests the young cow-boy without incident and takes him down to the local justice of the peace.

The doctor pronounces Curly Bill’s chance of survival as 50/50, to which the outlaw proclaims, “Whenever I get an even chance, I always come out ahead.”