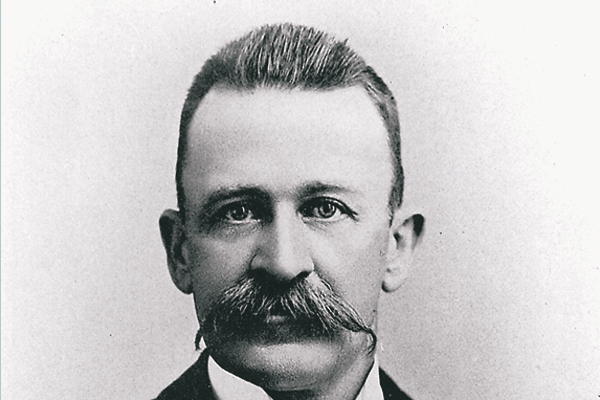 Curly Bill Brocius is holding court in Galeyville, Arizona, with his cow-boy cohorts.

Jim Wallace, a veteran of the Lincoln County War, rides up on a chestnut horse with a white-striped face, dismounts and joins Brocius and friends on the porch of a saloon.While the cow-boys catch up on the latest news, local constable Goodman comes down the street, notices the horse and asks Wallace where he got it. Insulted, Wallace pulls his pistol and shoots at the ground near Goodman’s heels, saying as he does, “If you want that horse more than I do, take him.” The lawman quickly leaves in the midst of laughter, and the cow-boys think it is all great sport.

Deputy Sheriff Billy Breakenridge, who is in town to serve attachment on a store that has gone out of business, walks past the saloon when Wallace comes out and confronts him, asking if he, too, is after “that horse.”

“No,” Breakenridge replies, “I am riding a better horse than that.”

Wallace reaches for his revolver, but Breck (as his friends call him) quickly pulls out his pistol from his waistband and jams it into Wallace’s stomach, and with his other hand grabs the cow-boy’s gun hand, overpowering him.

Rather than arrest him, the deputy returns Wallace’s pistol and exhorts him to stop making a fool of himself. Leaving Wallace behind, Breck enters the saloon and buys a round of drinks for the boys. With things back under control, Breck leaves to finish the inventory at the store.

After hearing what happened on the porch, Curly Bill demands that Wallace bring Breck back to the saloon for a public apology. Humiliated, Wallace does as he is told. Curly Bill is unsatisfied with the apology, however, and threatens to shoot Wallace’s horse.

The cow-boys then take up residence at another saloon, Babcock’s. After more abuse from Curly Bill, Wallace decides it is a good time to leave.

Soon after Wallace’s departure, Curly Bill leaves the saloon. While Curly Bill mounts his horse, Wallace steps forward and shoots at point blank range. The bullet hits Curly Bill in the neck and passes through his cheek, taking out a tooth as it exits his jaw.

Hearing the gunshot, Curly’s pards quickly come outside and disarm Wallace. Others carry the cow-boy leader to a nearby doctor’s office.

“Billy, someone shot me,” Brocius says to Breck, who has heard the shooting and came to investigate. “Who was it?” the outlaw asks.

Breck says he doesn’t know, but he assures Curly Bill he will find out. Walking up the street to Babcock’s corral, the deputy finds Wallace, disarmed and surrounded by cow-boys who want to lynch him.

Breck arrests the young cow-boy without incident and takes him down to the local justice of the peace.

The doctor pronounces Curly Bill’s chance of survival as 50/50, to which the outlaw proclaims, “Whenever I get an even chance, I?always come out ahead.”

The Crimes of Curly Bill

What follows is a meager rap sheet, detailing Curly Bill’s verified scrapes with the law. Legend has filled in the rest.

• May 21, 1878: Curly Bill and Robert “Dutch” Martin attack a military ambulance wagon eight miles north of El Paso, Texas, killing one soldier and badly wounding another. Captured in Mexico the following day, the two outlaws are tried and convicted but escape on November 2.

• Around January 9, 1881: Exonerated for the killing of White, Brocius goes on a tear as he and his cow-boy pards tree Charleston, robbing stores and citizens at will. They also allegedly humiliate a preacher and his congregation at gunpoint. When they take over a Mexican fandango, all the participants are forced to strip nude and dance.

• March 8, 1881: Cow-boy Dick Lloyd is shot and killed as he drunkenly rides his horse into a Maxey City saloon, where Curly Bill, Johnny Ringo and others are playing cards. Saloon owner Jack O’Neil turns himself in as the shooter.

• July 27, 1881: Near Fronteras, Sonora, in Mexico, American cow-boys attack a party of 16 Mexicans on their way to the U.S. to purchase goods. The cow-boys rob the party of $4,000. Although Curly Bill is not named in the reports, legend has nominated him as one of the participants, if not the leader. Furthermore, the location of the ambush has been moved to Skeleton Canyon in Arizona.

• November 1881: Curly Bill is arrested in Lordsburg, New Mexico, but released after paying a fine (no other details are known).

• December 2, 1881: A Cochise County grand jury indicts Curly Bill and three other cow-boys for grand larceny. The complaint, filed by a rancher in Arizona’s Huachuca Mountains, stated that the cow-boys had stolen 19 head of cattle.

Fighting Days are Over

“Curley Bill, a notorious outlaw, was shot and instantly killed at Galeyville Thursday afternoon by his partner, Jim Wallace,” reported Tucson’s Arizona Citizen on May 22, 1881. But four days later, the Tombstone Nugget clarified: “‘Curly Bill’ not Dead.” The following excerpt is from the May 26, 1881, news report:

From a gentleman who arrived from Galeyville yesterday, we learn that Curly Bill is rapidly recovering from the effects of his wound. Curly’s escape from death was a miraculous one, the ball passed between the thorax and jugular vein without touching either. When the doctor examined the wound, Bill asked him what his chances for life were. The doctor replied that the chances were about even. “Then,” exclaimed Bill, “I’m going to get well, for whenever I get an even chance I always come out ahead.” Curly says his fighting days are over and he intends to return to Texas to see his old mother as soon as he recovers. He got off a witticism at the expense of his shooter, Wallace. “Boys,” said he, “let Wallace go up to Tombstone. They’ll turn out to meet him with a brass band!” It is a fact that there isn’t much love in Tombstone for Curly, and no doubt Wallace would receive a popular ovation for his service in giving Curly a dose of lead, and thus incapacitating him from mischief for some weeks to come.

An Invasion of Outlaws

After escaping jail in Ysleta, Texas, Curly Bill and Bob “Dutch” Martin stole their way westward and landed in the bootheel of New Mexico.

Since the early 1870s, after the Apaches were moved onto the San Carlos Reservation, enterprising cattlemen like John Chisum began to drive herds of cattle into Arizona to feed both the Indians and the soldiers brought in to keep them corralled. These large cattle herds brought with them more than a few cow-boys who stayed on to carve out a piece of the business for themselves.

Numerous other renegades from West Texas and New Mexico were either forced out or chose to move farther away from the law to this virtual outlaw haven.

Curly Bill, Martin and the Clantons were some of the outlaws attracted to the lush grasslands (old-timers in the Animas Valley tell of the ground water being less than two feet under the surface near the Lang Ranch). It was Curly Bill who founded the famous Gray Ranch, still in existence in the 21st century.

The outlaws particularly enjoyed the haven’s close proximity to two borders and three jurisdictions (New Mexico, Arizona and Mexico). Plus, the bootheel was about as far from New Mexico officials and the law as one could get.

After the shooting, Galeyville’s Justice of the Peace G.W. Ellenwood discharged Jim Wallace. Ellenwood perused “several law books” and heard saloonkeeper Babcock’s testimony, which convinced the justice that the shooting was “self-defense.

After Wallace was released from court, Billy Breakenridge retrieved Wallace’s horse and arms for the shooter, and the two parted ways. While on a stage from Galeyville, heading for the railroad, Breck met up with Wallace just outside of town. “He was standing in the road, holding his horse, and said he was waiting to learn how Curly was getting along and if he was expected to die,” Breck later wrote in his book Helldorado.
Breck took pity on the cow-boy and invited Wallace on the stage, dropping him off at the next station. “He told me he was broke, and I paid for his supper and gave him ten dollars. I never saw him again, but he mailed me the money soon after I got to Tombstone.”

By June, a newspaper reports that the outlaw chieftain “is able to walk about the streets of Galeyville, and will soon be in condition to again make it interesting for outlying settlements.”