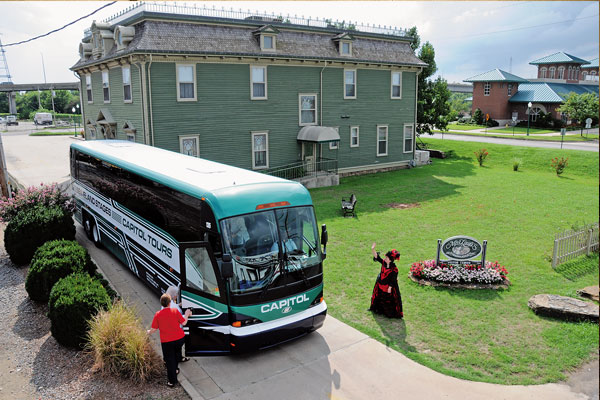 In its day, the “queen of the row” cost three times more for a trip upstairs than any other bordello charged in Fort Smith, Arkansas. Miss Laura would collect your $3 and send you on your way.

Miss Laura is still at the front door, in her red and black dress and plumed hat, flashing a black-lace fan. If you’re a male visitor, you’re likely to hear, “Well, Joe, it’s been a long time since you been around.  Catch up on that bill while you’re here?”  If you’re a woman, you can expect, “How are you today—looking for a job? I need a blonde upstairs.”

The modern-day woman who has brought the successful madam to life admits, “Miss Laura has got an attitude.”

The two-story Victorian bordello  has an attitude, too, as the visitor’s center for a town that went from being a pass-through on the way to the goldfields to a pass-by when the interstate came.

“This house and Miss Laura gave Fort Smith an identity,” says today’s Miss Laura, Carolyn Joyce. “It used to be we had to take out a map to show folks where Fort Smith, Arkansas, was. Now they see me, and people say, ‘Fort Smith is here.’ It brought an identity to the city.”

The other thing Joyce has proved is that Miss Laura is a survivor. Laura Ziegler came to town in 1898, drawn by Fort Smith’s 66 saloons and a row of bordellos.
The 39 year old spent $600 for a lot and $3,000 to renovate the most opulent house  on the row, with nine
girls living and working upstairs, while she lived in a suite of rooms on the first floor. When she left town in 1911, she sold the house for $47,000. Nobody knows what happened to her. “Maybe she cleaned up and got married,” Joyce suggests.

The house she left behind had some remarkable good luck. A fire in 1910 destroyed other houses on the row, but stopped 75 feet from Miss Laura’s front door before the wind shifted. A 1943 flood came to the building, but not inside. By 1963, it was the only house left on the row; the town was ready to raze it, but the late Don Reynolds saved the building from being demolished and got it on the National Register of Historic Places—the first bordello on the list. He put in a restaurant and bar, but those businesses closed. In 1992, the building sat empty until the city bought it and hired Joyce to run a visitor’s center.

“I decided I needed a niche to get motor coaches off the interstate,” she says. “Something different.  Something off the wall.”

As she toured the country to promote her town, the national media paid attention. “They all picked up on this gal,” she says with a laugh.  “I think they thought of me, ‘She must be totally nuts, so let’s go talk to her.’”

In honor of the character she created to promote Fort Smith, Joyce was inducted into the Arkansas Tourism Hall of Fame in 2011. Miss Laura is about the best thing that ever happened to Fort Smith.