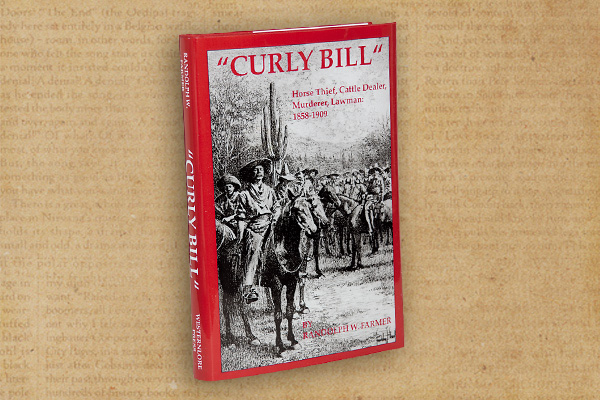 Randolph Farmer’s “Curly Bill” is presented as a biography of the cattle rustling cowboy who survives today in frontier history as a minor appendage to the Wyatt Earp story. Farmer seems to be arguing that Curly Bill Brosius was something more, though exactly what isn’t clear.

In one odd passage he even suggests that Brosius—the spelling he prefers—was more famous than Earp because of a handful of dime novels written about someone named “Curly Bill,” though who the novelist had in mind as his subject is not explained.

One of Farmer’s primary purposes seems to be to diminish Earp’s fame before the 1931 publication of Stuart Lake’s Frontier Marshal. “Finally,” Farmer writes, “in 1927 Wyatt got some attention. Walter Noble Burns’s book, Tombstone: An Iliad of the Southwest, cast Wyatt Earp as the hero.…”

Let me interrupt. Some folks have erroneously believed that Earp—the “Lion of Tombstone” in Burns’s phrase—is the central figure of Burns’s Iliad.  In fact, he is merely one of several heroes in this survey of the legends of the Old Southwest. The Iliad’s other heroes include Doc Holliday, John Ringo (“a Hamlet among outlaws”) and Texas John Slaughter.  (I use the word “hero” in the Greek sense, great, but not necessarily good, rather than the American Western movie sense of the guy with the white hat.)

At any rate, by 1927, Earp had already been written about in stories in Police Gazette, Harper’s Weekly and The San Francisco Chronicle, as well as in Bat Masterson’s profile in Human Life, Frederick Bechdolt’s 1922 book When the West Was Young and scores of newspapers around the country. One wonders where Farmer’s “finally” comes from.

The text is fraught with irrelevancies. We’re told that Gen. William Tecumseh Sherman was a “close friend of former President Grant;” I hope Farmer doesn’t consider that breaking news. He also uses sources whose origins are questionable. One is a quote from Texas writer Ed Bartholomew; when tracing it to back Bartholomew’s book, no source is given. Another of Farmer’s sources is attributed to Wikipedia.

At times, in fact, Farmer appears to be playing a shell game with his sources. When he writes that, “a Federal audit of [U.S. Marshal Crawley] Dake’s Arizona marshalcy in spring of 1882 notes that Dake ‘had retained as a deputy a known outlaw, Wyatt Earp,’” his footnote cites the noted historian Gary L. Roberts. But that quote does not come from Roberts; it comes from an article Roberts wrote for the WOLA Journal, and it does not reflect Roberts’ opinion.

Farmer constantly pushes his narrative in the direction he wants it to go. For instance, early in his book he writes, “By inflating Curly Bill in stature, Wyatt Earp’s alleged defeat of him made his story more saleable. Even Earp’s friend [former Tombstone mayor] John Clum referred to ‘colorful, fantastic, and fictitious tales’ of Earp’s career being published before 1929.”  The statement suggests that Clum was implying Earp had embellished or perhaps even invented his story of killing Curly Bill, but Clum was clearly speaking of other writers’ embellishments. Far more often than not, Clum’s accounts are consistent with Earp’s own.

I saw even larger problems with Curly Bill. When key witnesses to Tombstone history, such as diarists George Parsons, present opinions that clash with Farmer’s own, they are dismissed. For instance, when Parsons records that he was pushed by someone called “Texas,” Farmer concludes that “incidents such as that one no doubt hardened and biased Parsons’ perceptions [against Texans].” Farmer doesn’t seem to consider that such incidents may have clarified Parsons’ views rather than biased them.

Regarding the famous 1881 street fight in Tombstone, Farmer concludes, without offering testimony to the contrary, that the “Earp brothers and Doc Holliday attacked and killed the McLaury brothers and Billy Clanton in the infamous O.K. Corral incident.”  It’s as if the well-documented testimony of neutral witnesses to the gunfight do not exist. Or that Steven Lubet’s scholarly definitive study of the fight, Murder in Tombstone, was never written.

Farmer teases with rhetorical questions like, “Is this a description of Curly Bill Brosius as a young man?”  “Was this Concho Curly really Curly Bill?” And “Could he [one William Smith] possibly have been Curly Bill Brosius?” I found myself muttering, “It’s your book, you tell us.”

As for the topics that will drive most readers to buy this book, I have a feeling readers will find themselves shaking their heads in confusion. Farmer contends that Earp did not kill Curly Bill, who, he says, had left Arizona before the two’s legendary confrontation. His argument, though, is obscured by a blizzard of footnotes, and he give us no explanation at all as to why Curly Bill did not show up to accept The Tombstone Epitaph’s substantial cash reward or, more important, why Earp would have claimed to have killed Curly Bill if the cowboy could have reappeared and proved Earp a liar. Conveniently, Farmer places Curly Bill in Texas for the rest of his life, so far away that he is never seen by anyone from the glory years in or around Tombstone.

To the skeptical, Curly Bill ‘s sources are dubious and its arguments unconvincing.