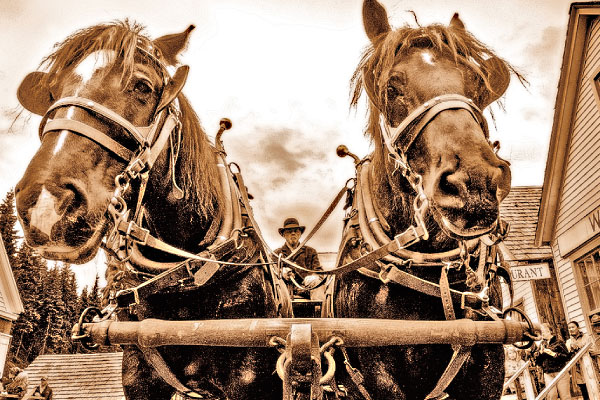 They laughed at Billy Barker when he and his crew went off to prospect for gold in the Cariboo region of British Columbia.

But they stopped laughing on August 17, 1862, when Barker “struck the lead” and pulled large amounts of gold out of his mine on the first day.

The best part of this British working class man’s story is Barker found far more than gold. The town that carries his name became the largest settlement west of Chicago, Illinois, and north of San Francisco, California, in the 1860s. Today, Barkerville is the largest living history museum in western North America—a remarkable feat for a town that has been saved not once, not twice, but three times.

Lying in the long sliver of the town, between the pine forest and Williams Creek, are 140 buildings, more than 187,000 artifacts, two historic cemeteries and the largest collection of pre-railway Chinese buildings in North America.

“When you step through the main gate, you’re stepping back into the 1870s,” says Dirk Van Stralen, the marketing and communication specialist for Barkerville Historic Town. “In its day, this was a 24-hour-a-day town, noisy and smelly. But now it’s just the opposite—it’s pristine, with fresh air and quiet.”

Barkerville has not had an easy time. In 1868, just six years after being established, the town burned to the ground—all except the Chinese section. The day after the fire, folks started rebuilding. When the gold dwindled by the 1880s, most of the residents moved away.

Not wanting Barkerville to go the way of most goldfield towns, residents got the town declared a National Historic Site in 1923. Families began preserving stories and artifacts from the town’s past. The library came from the family of John Bowron, an 1862 Overlander. Domestic life during Barkerville’s heyday is on exhibit at the Wendle House, an 1890s home built for the town’s blacksmith, Alexander McArthur, and purchased by Joe Wendle in 1904. More history is shared at houses owned by the family of Fred Tregillus, who came here in 1886 and frequently mined the Lightning Creek area.

Besides giving visitors a hands-on look at life in a late 1800s goldfield town, Barkerville also offers insight into multiculturalism. “It had the largest ethnic Chinese population in Canada, and we had blacks who were fleeing slavery. Despite the social bias of that era, they all did really well here,” Van Stralen says.

The 55,000 visitors who arrive each year often find costumed interpreters giving history tours. Van Stralen does not consider Barkerville to be a ghost town: “In its heyday this valley was home to about 5,000 people, and we still have one semi-permanent resident who spends part of each year here. It’s the people of this town who are its saviors.”