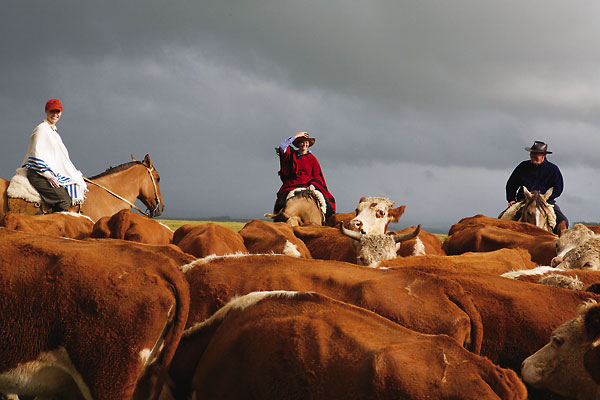 As a sudden rainstorm passed, I was glad to have on the wool poncho that Jorge let me borrow for the early morning ride to gather cattle and move them to another pasture.

Uruguay is a small South American country (population 3.4 million), bordered by Brazil (191 million) and Argentina (40 million). Driving from the capital city of Montevideo into the countryside, I saw horses everywhere. It seemed that every house had a horse outside. Men rode alongside the road on horses and worked cattle in the fields. Even children drove goods in carts led by horses.

In Uruguay, gauchos still run the estancias. ATV’s and trucks haven’t replaced steeds. Like our North American cowboys, the gauchos work with and protect the cows, sheep and horses on the farm, lassoing sick cattle, moving the animals from pasture to pasture and more.

El Charabón, an estancia in the Rocha province, raises cattle and sheep, and is run by a Uruguayan couple. Here, you don’t need to speak Spanish to go out with the gauchos and enjoy their way of life. Hand and arm gestures seem to work, as well as a simple nod or a smile. If you come to an estancia like El Charabón as a tourist, you won’t be treated to a show but engaged in day-to-day life with true gauchos.

Really wanting to experience this gaucho life, I tried to look the part. I wore a pair of bombachas, a lightweight cotton pant with a wide leg that cinches at the ankle, so that you can slip your feet into a pair of soft, knee-high leather boots. The gauchos wear bombachas along with berets or wide-brimmed hats and wool ponchos. They carry a facon, a long knife, and rebenque, leather whip. The attire is so comfortable, I would have worn my bombachas on the plane had they not been wet and dirty from my time riding in them.

You will see gauchos and people all over Uruguay sipping mate, a tea that is like the national drink of Uruguay, from a straw. It’s strong. The first morning I tried it, I liked it, but I can only partake of it in the morning. I was offered it in the afternoon and declined; I knew I would be up all night if I drank that much caffeine. The gauchos, however, drink mate all day long, another show of their strength.

I asked Jorge Zuasnabar, who owns El Charabón, how one gets to be a gaucho. Jorge told me that most gauchos are born into it. They grow up on ranches and get training from their father, much like how most of our modern cowboys in the U.S. get their start. I would have liked to ask more about life as a gaucho, but my Spanish skills were lacking. Also, many of the gauchos who I met and rode with in Uruguay seemed a little shy. They were strong, silent types, not unlike our own iconic American cowboys.

The gauchos of South America traditionally lived a nomadic lifestyle, living off of the land and sleeping outdoors. They traveled and worked at ranches where they were needed. Though some gauchos still live this lifestyle, many gauchos in Uruguay today are employed by single ranches, and this has changed their lives.

At La Salamora, an estancia that I visited in the rocky, rolling grasslands of Lavalleja, Gilberto Benitez was a nomadic gaucho until being hired by the ranch a few years ago. Prior to moving into a house of his own at La Salamora, Gilberto lived outside, using his saddle as a pillow, and worked for various area ranches when they needed him. Gilberto now lives in his own house on the ranch, with his own TV, which has brought him news of places he didn’t before know existed. Gauchos are still doing real work, but many in Uruguay are doing it a bit more comfortably now.

As I traveled around the country meeting people like Gilberto and Jorge, I was glad to see the Uruguayan estancias are still pure, working ranches with real cowboys. Many ranchers want to hold onto their heritage, even as they move toward the future.