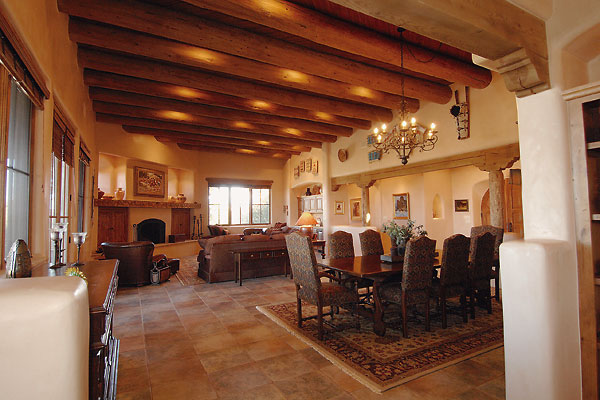 People build homes in the West for many reasons. Mark and Linda Miller designed their 7,500-square foot home and adjacent casita in Santa Fe, New Mexico, to focus attention on their Western collection, which includes paintings, pottery, Indian artifacts and fossils.

But this is no museum; it is a home and place for Mark and Linda to gather with their children and grandchildren, so it is designed with plenty of space for family meals and group gatherings, while allowing areas for private time as well.

The classic Pueblo Revival home has four bedroom suites, five fireplaces, a large common area and an open kitchen with a snack bar. When creating the design, Mark walked the site, looked at the views of the Jemez and Sangre de Cristo Mountains, and then placed rope on the ground to delineate the space. This allowed him to be certain that the placement of each window would offer different perspectives of the scenery outside, such as the sunrise on Sangre de Cristo Mountain seen from the master suite and the Jemez Mountains seen through a wall of windows in the living room.

Their furniture is selected primarily for comfort with plush couches and chairs, intermingled with unique tables, and large area rugs on travertine tile floors. The open design is enhanced by log ceiling beams that contrast with the hand plastered walls. The neutral colors provide a warm feeling, as well as being the perfect accent for the art collection.

Recessed shelving gives plenty of room for the pottery collection, which includes more than 500 pots. On either side of the front entryway, Mark and Linda have a nicho. (Traditionally nichos, small household altars, are tin and glass cases that hold the images of saints, retablo santos or devotional paintings of thanks.) Placed within the Miller’s nichos are unique pots made by Nathan Youngblood and his grandmother Margaret Tafoya (1904-2001), both of Santa Clara Pueblo. Nathan continues to use the pottery techniques perfected by his grandmother and other family members; he is a sixth generation potter. By showing the two pots in the nichos, the Millers symbolize their recognition of the value of pottery traditions and family relationships while highlighting generational differences—and similarities.

“We collect it because we love the beauty of it all,” Mark says of their various types of art and handcrafted creations.

The mantle above the fireplace in the living room is hand carved, showing characteristics of New Mexico. On it are several items including a redware jar with deer styling by Tammy Garcia. A focal point above the mantle is an original oil painting by Frank McCarthy. The space is accented by windows to either side of the painting, which gives back lighting to the pottery and interesting views to the outdoors.

Other windows in the home provide plenty of natural light. During the late afternoon, some areas of the home glisten with a golden glow.

A bar to the right of the living room fireplace is a display space for some of Mark’s most unique collections: Fossils that include 100 million-year-old sand dollars, a mastodon tooth and a stegosaurus scale. Mark studied anthropology and geology in college, but he also attended the Wharton School of Business. He eventually worked for the Hearst Corporation, but through his collecting, he has been able to retain his college-era interests.

Collecting the pottery and other art has been a passion for Mark and Linda, who gathered some of their unique items by literally camping out at Indian Market in Santa Fe, sleeping in lawn chairs, meeting the artists and learning about their creations.