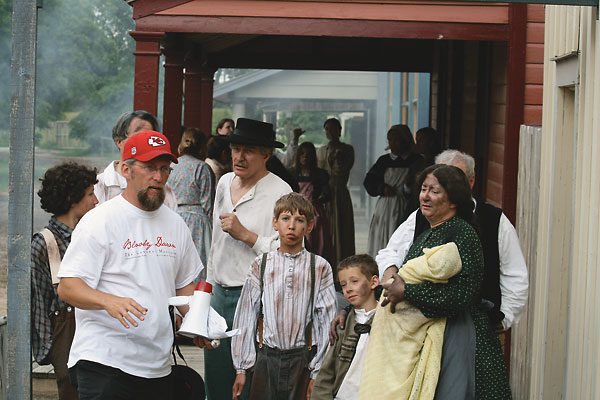 William Quantrill makes me angry and curious. A part of me roots against him and wishes for his demise. Another part of me is incredibly curious as to what made him tick. Did he really care about the cause, or was he simply a manipulator who found an audience? How did an Ohio farm boy and school teacher lead 450 Missouri bushwhackers to raid and practice irregular guerrilla warfare? Equally as intriguing was how long he could keep a lid on many of the brutal men he led.

I am a true descendant of a Union soldier, Joseph M. Spurgeon, who pursued Quantrill immediately after the Lawrence raid. I’m fortunate to also own his carbine.

The difference between Bloody Dawn and other docu-dramas is its effort to understand both sides of this tragic story. What motivated the raiders is essential in understanding this tragic event, but it should not take anything away from the horrific trial that the citizens endured. Rather than dumb down the material, we tried to present it in a way that allowed viewers to draw their own conclusions.

Ride with the Devil excellently conveyed the intensity of people living in the Kansas-Missouri border during the Civil War. One particular scene captured that tension best. Inside the Eldridge (Free State) hotel, one nasty raider is killing unarmed, surrendering citizens. An older man begs for his life. Tobey Maguire’s character Jake Roedel, also a bushwhacker, intervenes and backs down the more bloodthirsty raider. The old man thanks Maguire, who curses at the man and essentially says “get away from me old man.” The scene depicts the delicate line the raiders walked if they did the unexpected. If they were motivated by reasons of kindness, they dare not broadcast it. Good movie.

Historian Thomas Goodrich’s book, Bloody Dawn, absolutely inspired me and helped me to become friends with the characters in this story. Because of the way Tom writes, I felt as if I was in the struggle for life with them, rooting for the survival of the citizens of Lawrence.

Gunsmoke veteran Buck Taylor and I share a love of the West and of a great story. It was a great pleasure to have him on the set, and we discussed books and art a lot.

The inventor of basketball, James Naismith, died in Lawrence, near where I coach high school basketball. My ancestor played football for KU in the 1920s. His coach was Forrest C. “Phog” Allen, who took over the reins from Naismith.

My father taught me the value of hard work and impressed upon me that every moment that I was not working was a moment that someone else was. “You’re burning daylight” was often heard in my childhood home. My mother impressed upon me the value of grace and perseverance. She taught me that everyone has value and that it was important to treat people with kindness.

My chimney in 1854 Lawrence, Kansas, would be bare I hope! I would like to think that I would have not put up a white flag that claimed no allegiance to either side: free state or pro-slavery. In reality, I had family on both sides; I can only imagine how tense the territorial and war period would have been along the Kansas-Missouri border.

History has taught me the value of making good decisions in life. I’m concerned about the arrogance of modern-day Americans who assume that things will always simply work out. They forget the sacrifices of the past, or fail to understand that but for a certain event, or victory or courageous decision, life could have been much different.

Ken Spurgeon is a teacher, historian and filmmaker. He holds an M.A. and B.A. in history from Wichita State University, and he currently teaches at Northfield School of Liberal Arts. Ken has written (with Jonathon Goering) and produced two documentaries dealing with the Kansas-Missouri area during the Civil War: Touched by Fire: Bleeding Kansas, 1854-1861 and Bloody Dawn: The Lawrence Massacre, which he directed for Lone Chimney Films. He lives in Wichita, Kansas, with his family.

Ken Spurgeon is a teacher, historian and filmmaker. He holds an M.A. and B.A. in history from Wichita State University, and he currently teaches at Northfield School of Liberal Arts. Ken has written (with Jonathon Goering) and produced two documentaries dealing with the Kansas-Missouri area during the Civil War: Touched by Fire: Bleeding Kansas, 1854-1861 and Bloody Dawn: The Lawrence Massacre, which he directed for Lone Chimney Films. He lives in Wichita, Kansas, with his family.