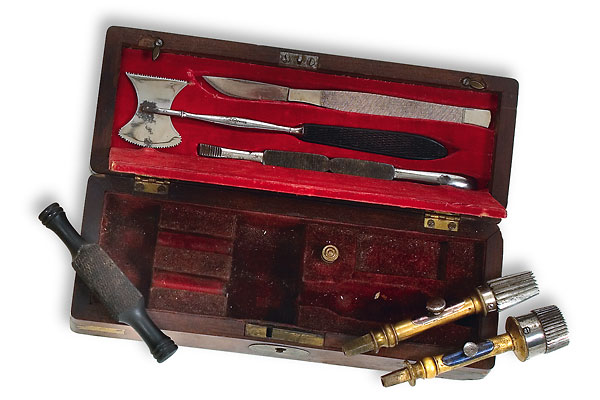 “He has killed me now,” were the reported words of Crazy Horse, one of the greatest chiefs of the Sioux Nations, just after he was bayoneted at about 4:00 p.m. on Wednesday September 5, 1877.

The confusing details of this tragic event are well described in The Killing of Chief Crazy Horse, by Carroll Friswold with edited additions by Robert A. Clark. Friswold wrote the book from the viewpoint of three persons who were present on that fateful day at Fort Robinson, Nebraska. First was Chief He Dog, longtime friend of Crazy Horse. Second was guide and interpreter William Garnett. Finally and fortunately, for the purposes of this article, was Dr. Valentine McGillycuddy, the medical officer on duty that day. These “eyewitness” accounts of the same event testify to the obvious confusion and chaos that prevailed near the guardhouse at Fort Robinson. Disagreements aside, everyone concurred the U.S. Army intended to arrest Crazy Horse and that he died of his wound(s) before midnight on the same day, while being attended by Dr. McGillycuddy.

The collective description of events indicated that Chief Crazy Horse was fatally wounded in a scuffle that transpired during or just after his entering the guardhouse at Fort Robinson. Upon learning of his imminent arrest, he brandished a knife. A nearby sentinel, private William Gentles, a veteran about age 47, either deliberately or inadvertently stabbed Crazy Horse in the side. Garnett recalled Crazy Horse might have accidentally fallen upon the private’s bayonet during the struggle. Others depict the fatal wound as intentional.

Chief He Dog described two wounds on Crazy Horse’s right side: a cut and a smaller deeper bleeding wound below it. He also recounted blood coming out of the chief’s mouth. Garnett, interestingly, said Crazy Horse was stabbed on the left side. Forensically, both men could have been in agreement depending upon their visual orientation (front versus back) when describing the location of the wound.

The most detailed information came directly from or was attributed to Dr. McGillycuddy. In a letter to Garnett, dated June 24, 1927, Dr. McGillycuddy stated at the time of the fatal event, “Hell was popping.” Within seconds of the stabbing, “I found Crazy Horse on his back, grinding his teeth and frothing at the mouth, blood trickling from a bayonet wound above the hip …pulse weak … missing beats …I saw that he was done for … I gave him hypodermics of morphine which eased his pain … he died about midnight….” After Dr. McGillycuddy’s examination, he noted, “… the bayonet went through both kidneys and within one-half inch of going through his body.”

The human kidneys are located in the posterior (back) part of the abdomen, above the hips, on both sides of the vertebral column. They are encased in fatty tissue, but anteriorly (forward side) adjoin the abdominal cavity. A bayonet stab wound from either side of the length described could have penetrated one or both kidneys and entered the abdominal cavity. If the thrust was initiated from the right side (seen from behind), the blade could have even pierced the lung (thoracic) cavity, causing bleeding and a partial collapse of the lower lobe of the right lung (consistent with both Chief He Dog’s observation of bleeding from the mouth and McGillycuddy’s of “frothing from the mouth”).

It appears Chief Crazy Horse probably died of hemorrhagic (blood loss) shock from the stab wound to his side, possibly complicated by a partial pneumothorax (collapsed lung).

This terminal event would have involved the slow but persistent internal loss of blood and a drop in blood pressure, leading to an irregular beating of the heart (cardiac arrhythmia), a weakened pulse and an eventual cardiac arrest. My diagnosis is consistent with the six-eight hours between the time of his largely untreated injury and the time of death.

I estimate the bayonet of Private Gentles would have been 10 inches or longer to inflict the wound as described. Hauntingly, soon after that September day when he killed Chief Crazy Horse, Mr. Gentles, so misnamed, died of an asthma attack on May 20, 1878, while posted at Fort Douglas in Utah Territory.