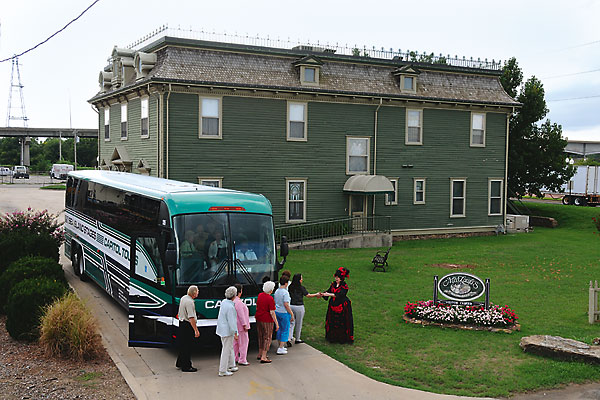 If you were a local in the Fort Smith region when Bass Reeves was hired in 1875, you would have immensely respected the former slave and his fellow deputy U.S. marshals who were bringing law and order to the Indian Territory.

Actually, many of the 85,000 folks who reside in Fort Smith today also carry a source of pride for these marshals. They respect the heritage that has birthed their city, and they honor the marshals who serve our nation presently.

Today’s citizens are abuzz about the latest development in sharing this history: a riverfront project along the Arkansas River with plans to build a $22 million U.S. Marshals Museum. This past June, the board approved the final design plans for the museum, says Project Director Dr. Sandi Sanders.

This museum would augment the story presented at other local sites. Fort Smith is home to the “Hanging Judge’s” courtroom, where Isaac C. Parker sentenced 160 people to death (79 of them hanged on the gallows). The national historic site also offers a replica of the 1886 gallows, the frontier jail and the 1846 commissary storehouse. The city’s national cemetery contains the graves of former deputy U.S. marshals and of the Hanging Judge himself. And local area museums offer exhibits that explain how this wild territory grew into the state’s second-largest city.

Dr. Sanders is no stranger to Fort Smith, having formerly served as the senior vice chancellor for the University of Arkansas. Some of the spots that she and other locals frequent are shared here.

Best Spot to View Wildlife: Janet Huckabee Nature Center, which offers a walking trail that is great for families.

Community Cultural Center: The University of Arkansas, which sponsors Broadway Touring Shows, concerts and sporting events enjoyed by the locals.

Radio personalities locals listen to: “Arklahoma” morning show with Gary Elmore and Bryan Harris on AM 1320, and Fred Baker’s morning show on KISR 93.

Who’s the person in Fort Smith everyone knows? Mayor Ray Baker, who has been in office almost 30 years.

Preservation Projects: A storefront at the historic Garrison Avenue block, and the Park at West End, where you can ride on a vintage carousel and eat a meal in antique rail cars.

Special thanks to Dr. Sandi Sanders, project director for the U.S. Marshals Museum, for sharing her love of the town with us.