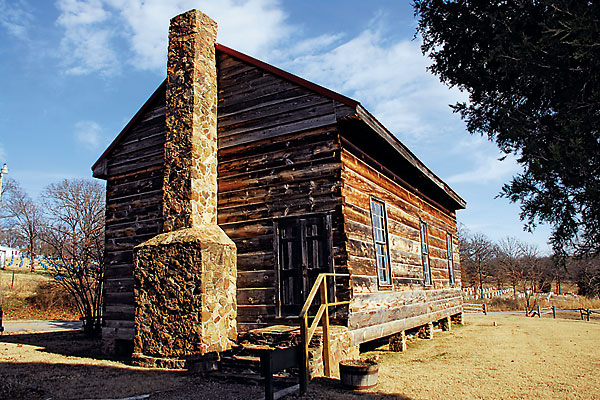 Last March 6, a direct descendant of Sequoyah, the mayor of Tahlequah and the principal chief of the Cherokee Nation were among those who came together to honor an important exchange that took place 100 years ago.

In 1909, the Oklahoma legislature purchased the 1889 Female Seminary and surrounding land from the Cherokee Nation. The Founder’s Day celebration  in March was just one of many instances to come in which the Nation hopes to work with its capital city of Tahlequah to ensure the local history is shared.

Principal Chief Chad Smith began forging this partnership with Tahlequah two years ago, at an August conference announcing the Nation’s formation of a Cultural Tourism Department. “We can’t make this happen by ourselves. We need your help. It’s simple, the Cherokee Nation wants to tell its story. Our self interest is to develop a partnership with you to tell our story.”

On hand to cover the conference was the Cherokee Phoenix, the first American Indian newspaper, printed since 1828, and created as a direct result of Sequoyah inventing the Cherokee alphabet seven years earlier.

For the paper, staff writer Will Chavez interviewed Beth Herrington, who serves on the Tahlequah Historic Preservation Advisory Board. She told him that the THPAB was looking forward to partnering up with the Nation.

Herrington is certainly a good ally for the Cherokee Nation. She offers up tours of the city’s historic sites, such as the 1854 home of a Cherokee merchant, on INTV’s Historical Tahlequah. When it came to writing the entry on Tahlequah for the Encyclopedia of Oklahoma History & Culture, the Oklahoma Historical Society turned to her.

Of all its efforts to bring its tribal history to light, the Cherokee Nation put its best foot forward by spreading its philosophy to the citizens and officials of Tahlequah. Gadugi—working together for the benefit of all—is alive and well in the Cherokee Nation (population 270,000) and its capital city of Tahlequah (population 16,600). Included here are some of their numerous treasures.

Favorite Local Cuisine: Tommy Lee Jones and Wes Studi are among the actors who have eaten at Echota House; try its buffalo filet mignon and cowboy caviar.

Best Art Galleries of the West: Murv Jacob’s Studio, and the gallery and art shows at Cherokee Heritage Center.

Best Bookstore of the West: The Riverhawk Shoppe at Northeastern State University. The campus is also home to the 1889 Cherokee Female Seminary.

Historic site schoolchildren visit: The George M. Murrell Home, built by the merchant in Park Hill in 1854 after he and his family were forcibly relocated during the Cherokee Trail of Tears era of 1838-39.

Do-Not-Miss Attraction: The Thompson House, built in 1882 by a local merchant for his son, Dr. Joseph M. Thompson, who served as the health officer for the Cherokees.

Old West Attractions: Living history exhibits and archives at the Cherokee Heritage Center, and the Tahlequah Round Up rodeos held in May through September at the Cherokee County Fairgrounds.

What to do in March? Attend eagle watches and loon tours at Tenkiller State Park and the nearby Western Hills Guest Ranch nature center.

Best Time of Year: Spring, with its blooming Redbud and Dogwood trees.

Preservation Projects:  Cherokee Nation Entertainment continues its preservation efforts on the Supreme Court building and the Cherokee National Prison. This past December, the Cherokee Capitol received a $150,000 grant from Save America’s Treasures to assist in the repair of the roof and foundation, and to help install a drainage system.