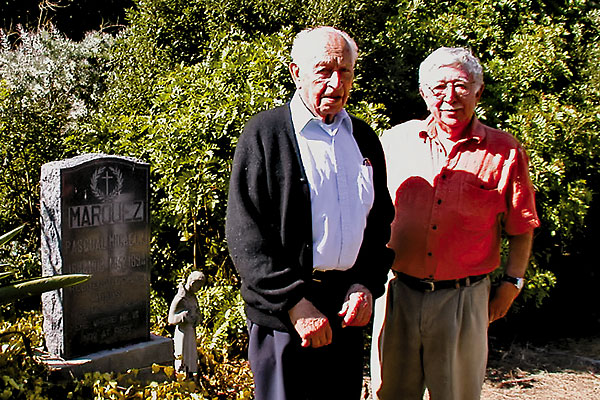 Ernest Marquez can remember back eight decades of joyfully playing in his family’s cemetery.

“I remember looking at the old wooden statue of San Lorenzo’s face and feeling he was looking back at me; the statue had glass eyes then, and they seemed so real to me.”

These days, Marquez is an 85-year-old historian and that cemetery is a historic landmark in the middle of California’s Santa Monica Canyon amidst some choice real estate. It is his dream to secure a proper access to the cemetery, so people can experience the tranquility of sacred ground that has held his ancestors since the mid-1800s. And, oh yes, he wants a restored statue of San Lorenzo to go back to its rightful niche.

As a child, Marquez knew this entire Canyon as his family’s rancho—some 6,656 acres known as Rancho Boca de Santa Monica that has a rich history.

For Marquez’s family, that history began in 1769, when his great-great-great grandfather Francisco Reyes came to Alta California as a Spanish soldier accompanying Father Junípero Serra on his quest to build Catholic missions.

By 1784, the Spanish Crown had awarded Reyes a land grant covering the entire San Fernando Valley. Reyes went on to serve as the third mayor of the Pueblo of Los Angeles.

The Catholic families that called this home would have had more than a day’s horseback ride to arrive at the nearest Catholic cemetery at the Plaza Church in Los Angeles, so they created their own cemetery on a sagebrush-covered hill that rimmed the Canyon.

When Mexico ceded California to the U.S. in the Treaty of Guadalupe-Hidalgo, which the U.S. Senate ratified in March 1848, rancho owners found they had to prove to the new government that their land claims were valid. Through appeals, this rancho stayed in the family’s hands.

Some land was eventually sold off, and the rest was divided up among heirs. Francisco’s youngest son Pascual received the cemetery and the family adobe where he had been born in 1844. Over the years, the Marquez and Reyes families, along with their close friends, buried dozens of loved ones at the cemetery, marking the early graves with wooden crosses that have long since disappeared. Pascual was the last person buried in the cemetery, in 1916. His grave is positioned in the same spot that the bed in which he was born would have sat in the adobe house of his birth.

In 1926, the family sold most of its land—including the cemetery—to the Santa Monica Land & Water Company to be subdivided for homes.

The first savior of the cemetery appeared in the form of Dorothy Gillis Loomis, daughter of the owner of the water company, who was horrified to think of homes being built on top of graves. She convinced her father to set aside a double lot for the cemetery.  On top of that, she bought a wooden statue of San Lorenzo in Mexico that was carved from a tree trunk. She had the statue placed in a niche in the wall of the cemetery, where it will rest again soon.

When the land around the cemetery became a choice residential neighborhood (the cemetery stands on the back side of a lot that abuts San Lorenzo Street), the City of Los Angeles placed a four-foot-wide easement down a vacant lot to provide street access to the cemetery. After neighbors contended the easement had been terminated due to nonuse, Marquez took his fight to the courts for years. The Los Angeles Superior Court decided in his favor in 2005. Now Marquez hopes he and his supporters can purchase the lot and turn it into a meditation garden leading into the cemetery. This will bring greater awareness to the cemetery, as a wooden fence across the lot currently obscures any view of the cemetery from the street.

Marquez notes his family isn’t alone in wanting the cemetery protected and accessible for its role in history. The City of Los Angeles designated the cemetery a historic landmark. La Senora Research Institute, which focuses on preserving the heritage of Rancho lands, has made the cemetery a major project, raising funds to restore its grounds and the adobe wall. Descendants from other branches of Rancho families have raised money for a new iron gate for the entrance, and a neighbor, Reese Relfe, had the severely deteriorated statute of San Lorenzo restored.

“Having this historical landmark lets people step back into time to remember that families were living in Santa Monica Canyon 180 years ago,” Marquez says. He notes fourth graders from local schools visit the cemetery every year and says most visitors are struck with its tranquility and beauty.

“We hope our visitors understand how much our families loved California and contributed to its important and colorful history,” Marquez says.

Marquez is the author of four award-winning books on early California history and is the historian at La Senora Research Institute. With the help of interns from five local universities, he is working on a book named Rancho Boca de Santa Monica: From the Beginning.