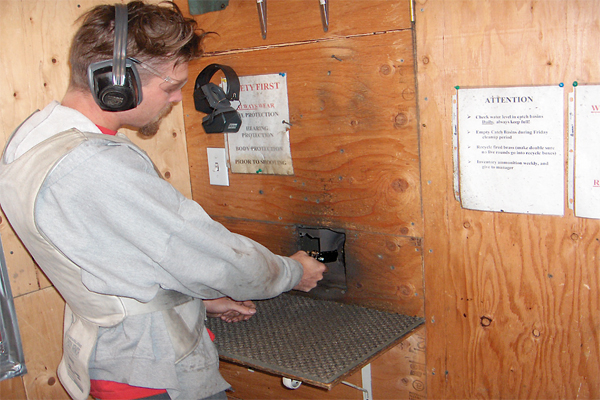 The small pocket pistol, known as a derringer, is one of Cobra Pistols most unique offerings. “No one else makes a close replica of the old Remington derringer,” says Doug Skillman, president of Cobra Enterprises in Salt Lake City, Utah

Cobra prides itself on offering excellent price points on all of its products. The aforementioned der-ringer that’s quite popular with cowboy action shooters often retails for around $112-136.

One fan the company has in its corner is the editor of American Firearms Industry magazine. “I never liked the attitude that only rich people should have firearms. Poor honest people suffer the most from crime in America. Cobra gives protection to many poor, honest working people, who need it the most.”

Doug calls himself a student in the “school of life.” Before entering the firearms manufacturing bus-iness, he spent 29 years as a construction engineer for the U.S. Army. “The military prepared me well for most anything I might undertake,” he says.

We’re sure his training is more than adequate for the Single Action Shooting Society (SASS), which Doug recently joined. Plans are even in the works for a Cobra Derringer Side Match during this August’s Utah SASS state championship.

John Wayne showed Doug and his fellow SASS members that belly guns are good friends to carry. He evened the odds with his Remington derringer in The Shootist.

What do actor John Wayne and hatmaker Roy Jackson have in common?

Much of the lands featured in movies starring John Wayne are now part of the 264-million acres controlled by the Bureau of Land Management, which is where Roy spent nearly a quarter of a century. He’s been everything from range conservationist to district manager.

Roy’s work at the BLM began in Las Cruces, New Mexico, and ended in Salmon, Idaho, when the Salmon District was abolished in 1994 and turned into the Salmon Field Office. Although Roy was offered positions in Alaska, Nevada and Colorado, he chose to retire and make his home in Salmon.

Retirement didn’t last long though, as he was soon pursuing a career with Charles F. Dickerson’s international auctioneers in New Mexico. But Roy and his family missed Salmon, and they decided to move back. With two auction companies already filling the niche in Salmon, Roy decided to take on a new field: hatmaking.

He worked as an apprentice for Sullivan Hatters in Las Cruces, New Mexico, before opening his custom hat shop in Salmon in 1998, in conjunction with his friend Kirk Klemmer, a boot maker (www.jaxonbilthats.com). With customers spread over the U.S., Canada, Germany, Netherlands, France and Australia, Roy admits “I spend a lot of time trying to stay caught up.”

Biscuit, his “hat dog,” helps him out, though. “He comes to work with me every day and travels with me to most every show. People may forget my name, but they will seek out Biscuit and bring their family and friends to visit him,” Roy says. His hat dog “partner” sells about six to eight pet fur felt hats per year.

But whether you walk on four legs or two, Roy gets a kick out of making hats that’ll fit your liking. Hatmaking is “perhaps the most rewarding job I’ve ever had,” he says, because “I like working with people and making a product which is as personal as the hats worn.”