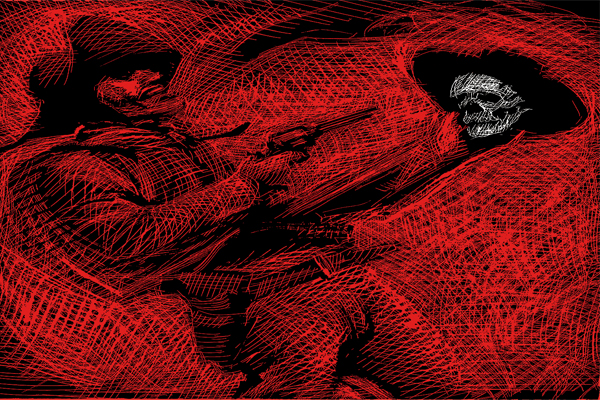 Texas badman has such a great ring to it. And, in terms of old West history, it’s one of those rare exceptions where legend meets the truth and is a perfect fit.

Jesse Evans fit the term to a tall T. Riding with “The Boys,” the outlaw raided and had his way with most of New Mexico, and even managed to ride with, and probably train or at least be a bad influence on, Billy the Kid. Run out of New Mexico, Evans and his outlaw pards fleeced and abused the badlands east of El Paso until a brave group of Texas Rangers rode them down in one aggressive gunfight.

Longtime con-tributing artist Gary Zaboly is back in the pages of True West with a vengeance. Gary’s first published image for True West appeared in 1974. Since then, he has illustrated over 75 articles. In 2000, Gary took a sabbatical to work full time on two books: A True Ranger: The Life and Many Wars of Major Robert Rogers and American Colonial Ranger: The Northern Colonies, 1724-1764. But now he’s back, and we intend to abuse the privilege. Welcome back Gary!

George Laibe was a principal in the creation, management and production of the Waylon Jennings and Willie Nelson “Outlaws” marketing campaign, and in managing both Waylon and Willie’s careers from 1973 through 1980. He also managed six-time Rodeo World Champion Larry Mahan’s theatrical and personal appearance career in the early 80s. His recent relocation to his Arizona home base and joining True West as Marketing Director completes the process of “Coming Home.”

Mark Boardman is True West Maniac #14.  And to show just how crazy he is, he’s  joined our staff as Features Editor. Mark is a Hoosier, born and bred, and he brings with him years of experience in public radio. He’s also spent the last few years writing responses to my blog entries, most of which I ignore. But Mark does have a lifelong interest in the Old West and a fondness for the stories of that era. In his new position, he’ll be sharing some of those stories, writing music reviews, putting together the Last Stand de-partment and keeping an eye on the True West cattle herd. He just has to learn that you don’t milk the bulls.