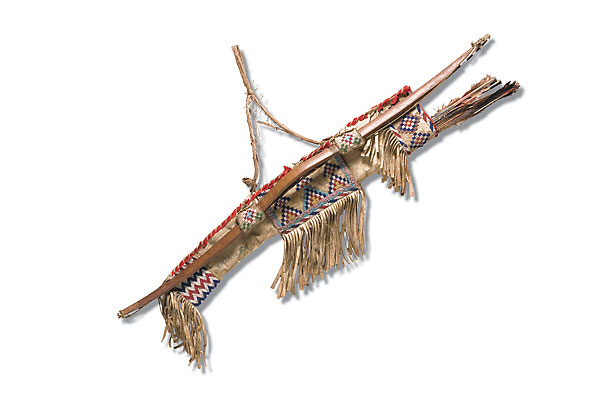 “I sold my photographs for twenty-five cents, and was allowed to keep ten cents of this for myself.

“I also wrote my name for ten, fifteen, or twenty-five cents, as the case might be, and kept all of that money. I often made as much as two dollars a day, and when I returned I had plenty of money—more than I had ever owned before,” Geronimo stated in his 1906 autobiography about the St. Louis World’s Fair he had attended two years earlier.

A beaded quiver and bow that he signed at that 1904 fair hammered in at Cowan’s American Indian & Western Art Auction on April 4 for $10,000. Ironically, that’s about the same amount Geronimo reportedly had in his bank account from selling his mementos when he died as a prisoner of war at Fort Sill, Oklahoma, in 1909. He and his Apaches had been ultimately forced onto that reservation in 1894 after Geronimo’s final surrender to the Army in 1886. His celebrity status from fighting in the Apache Wars brought him to the 1898 Trans-Mississippi and International Exhibition in Omaha, Nebraska; he went on to appear at various fairs, making money off his fame by signing autographs and selling buttons off his shirt and whatever mementos people wanted to buy from him.

A handwritten note by Herbert A. Stark, a native of Indiana, states that an archery contest was held at the fair, and that Geronimo used this set to compete in it. “Interestingly, one of the arrow tips is slightly bent,” says Danica Farnard, Cowan’s American Indian Art specialist.

Stark was working as a guide at the fair that year, and in his autobiography Land Sakes, he reports visiting a Navajo store for which he traded a “gold ring with a turquoise setting” for some Indian goods. This could have been where he acquired Geronimo’s quiver and bow set, as his handwritten note states “given to Navajo / traded to M. Stark for turquoise.” Stark’s note also states the set was made by Geronimo’s 16-year-old daughter. This could have been his youngest daughter Eva, who actually would have been 15 at the time; she, sadly, would die from tuberculosis two years after the death of her father (he died from pneumonia).

The Apache medicine man left for the exposition in St. Louis on May 12, 1904. At the fair, he rode in a ferris wheel for the first time, stating in his autobiography, after he landed, “I watched many of these little houses going up and coming down, but I cannot understand how they travel.” He witnessed a magician cut a woman in half,  a glass blower create glassware, which Geronimo bought, and a “negro” tied to a chair who freed himself. Geronimo thought it must have been done by a “miraculous power, because no man could have released himself by his own efforts.”

Five months later, Geronimo requested permission from the superintendent of the Indian School on the fair grounds to go back to Fort Sill. “He gives as his reason for wanting to return that he is tired of seeing the crowds in St. Louis, and also that he is homesick. Day after day he sat in the Indian building beating on his crude drum, singing his Indian song, which no one has been able to interpret, and occasionally writing his name in the notebook of a collector of mementoes of the fair,” reported The Wapanucka Press in Lawton, Oklahoma, on October 13, 1904.