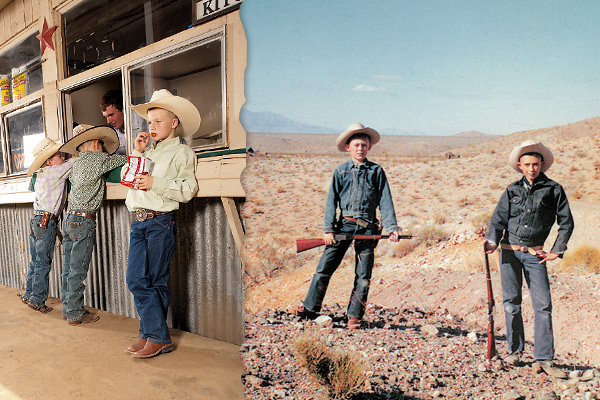 We all need heroes. We need champions whose deeds and accomplishments thrill, inspire and teach. For much of the 20th century, the cowboy was the archetypal American hero. Strong. Brave. Self-reliant. Virtuous. Several generations of Americans grew up wanting to be like their cowboy heroes. We started by dressing just like them.

The Baby Boomers who grew up in the 1940s-60s were the first generation raised on television. Our daily intellectual and entertainment diet included Roy Rogers, the Lone Ranger, Davy Crockett, even Howdy Doody and Buffalo Bob Smith. We joined our parents for Saturdays at the movies, watching cowboy adventures and looking up to screen icons like John Wayne.

Western apparel grew out of that tradition.  Jack B. Weil of Rockmount Ranch Wear and other pioneers of the Western wear industry openly acknowledged their debt to the silver screen. “I got a lot of my ideas for these clothes by going to the movies,” Weil once told a reporter.

Some of the clothes we wore as kids were cheesy costumes. The cloth was woven, dyed and cut to look like leather—right down to the thick-cut, Davy Crockett-inspired fringe on shirts, vests and chaps. Or we wore stiff wool cowboy hats and sported vinyl holsters for our pot-metal cap guns. Our cowboy and cowgirl attire allowed us to gleefully stage gunfights and play cowboys and Indians.

Thankfully, a lot of the Western clothes we wore as kids were miniature versions of outfits our parents wore—right down to the tiny mother-of-pearl snap buttons on the shirts and the fancy stitching on the boots. That’s when hero worship became personal. If you were fortunate enough to grow up in a family that wore Western on a regular basis, you wanted to dress just like your dad and mom because they looked just like your cinematic heroes. Western apparel manufacturers understood that.

They still do. Many of the bigger Western brands—Wrangler, Tony Lama, Justin, Cruel Girl, Cinch, Resistol and Stetson—offer a kid selection of the hats, shirts, jeans and boots they make for adults. A handful of brands create only kid’s clothing.

Sadly, most modern American kids don’t have cowboys as heroes. Their worlds revolve around pixelated, role-playing characters who vaporize each other or blow each other up. We’ve gone from virtuous to virtual in one generation.

You can help change that. Christmas is coming up. Buy videos of your favorite Western movies or television shows and put them under the Christmas tree for your children or grandchildren. Then watch the videos with them and share your own childhood memories. While you’re at it, buy them cowboy shirts and boots that resemble what you wear. You can be their role model. You can be their cowboy hero.

G. Daniel DeWeese coauthored the book Western Shirts: A Classic American Fashion.
Ranch-raised near the Black Hills in South Dakota, Dan has written about Western apparel and riding equipment for more than 25 years.