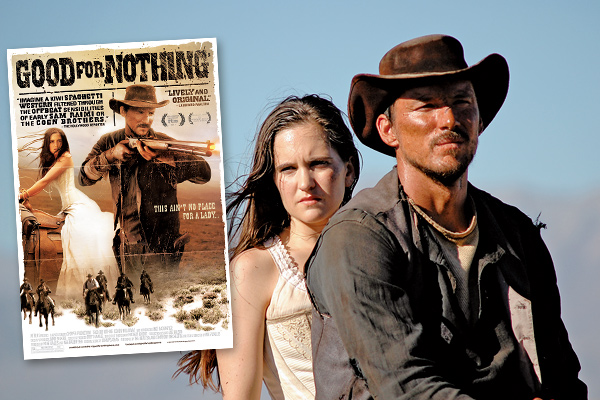 Inge Rademeyer and Mike Wallis are a team and a couple; together they wrote and produced a completely original, extremely entertaining Western called Good for Nothing.

Although we still have several months left to go in the film season, I feel comfortable stating this movie will be regarded as one of the absolutely best Westerns of the year.

Wallis directed the picture, while Rademeyer starred as the female lead in this largely two-character story. Even though Rademeyer has spent most of her film career working behind the scenes, she owns the part. No one would imagine she has not been acting her entire life.

The story, shot entirely in New Zealand, is a simple one: we meet Isabella Montgomery (Rademeyer), a proper young British woman who has just arrived to the post-Civil War American West via railroad, after the recent death of her father. Dressed in black Victorian finery, with the requisite corset, hat and umbrella, she is to be escorted to her uncle’s distant ranch.

Yet when Isabella and her two ranch hand escorts make a rest stop, they encounter an outlaw thief who kills a man.

One of the ranch hands sitting with Isabella reaches for his shotgun. Within seconds, both of her cowboy escorts have been shot dead. Once the smoke clears, Isabella is pulled outside, tossed over the saddle on her stomach and taken away on the desperado’s horse.

The Man (Cohen Holloway), who remains nameless—and nearly wordless—throughout the movie, carries Isabella with roughly the same consideration you might show a sack of seed. In fact, it’s funny that Rademeyer worked on the production crew of King Kong because Kong and the Man have a great deal in common: both are primitives, short on words and do whatever they feel like doing, whenever they feel like doing it.

Case in point, upon reaching the desolate countryside, the Man feels inclined to act upon his first impulse regarding the comely Isabella. Isabella struggles and runs, but she’s overmatched and helpless.

Then, to his amazement and consternation, the Man discovers he’s incapable of acting on his impulse. Assuming he’s suffering from an ailment, he ties Isabella to a tree and rides to a nearby town to consult with a physician.

“One of the reasons we named the movie Good for Nothing is because the Man is good for nothing,” director Wallis says. “He’s a good-for-nothing outlaw who doesn’t work, has no means, can’t function the way he expects to—even at the end, when he does a good act, he does it for nothing.”

“We considered naming the film ‘Broken’ for obvious reasons,” he says with a laugh.

Good for Nothing is actually a droll, funny movie, though you might not think so until a few minutes into the story. “The concept behind it is, you take a character who’s an anti-hero. When he endures something as perplexing as suffering what might be referred to as erectile dysfunction, in a serious Western, we see how he copes. It naturally becomes funny,” Wallis says.

From the vantage point of Isabella, the movie feels as if she has wandered alone into one of the worst-case Spaghetti Westerns—everybody is a creep or a thug. With her captor gone, she manages to get her hands free and finds her way to a sheriff’s office. She discovers that a good-looking woman in a state of disarray is assumed to be a working girl, and is treated as such, despite her protestations.

Then the Man walks in, kills the sheriff and a cretin who’s in a jail cell, on general principle. From that point on, the story introduces the sheriff’s idiot brother Will and his mercenary posse. You might say that they often cut to the chase.

As for Isabella, she’s kept prisoner, but, again, like Ann Darrow and King Kong, she seems to realize that while being held captive by a dysfunctional gun-totin’ caveman is an unfortunate turn of events, he’s as close to a protector as she’s going to find, especially since everybody she encounters seems to be at least as bad as he is and, perhaps, even a great deal worse.

Good for Nothing is funny, in the dry, deadpan, iconic sense found in some Spaghetti Westerns, like The Good, the Bad, and the Ugly. But it probably wouldn’t have worked had it not been so smartly written and acted. The film’s success is greatly owed to Holloway’s performance as the Man—a fast, deadly and utterly unconscionable killer most of the time, but also someone honestly perplexed by the chemistry he feels for Isabella, even though he’d never say as much. As odd as this sounds, the Man seems like an innocent.

Rademeyer acknowledges that the movie is meant to be funny, but, she says, “There’s a risk, if you refer to the movie as comedy, people might think of it as a parody.”

“What’s even funnier is that no one would ever guess, from seeing the movie, that Cohen works as a comedian most of the time,” she says.

“What’s also pretty entertaining,” Wallis adds, “is that the sheriff’s brother is an incompetent, and that everybody in the posse knows he is.”

This first plays out when we see the posse experiencing difficulty following the trail through water. Will, frustrated with his hired tracker, starts shooting at him. The tracker jumps back and forth in the stream, dodging Will’s lousily-aimed gunshots, until he finally gets out his gun and manages a couple of wounds. The entire scene displays incredible ineptitude.

“There’s this assumption that everybody could shoot straight, and surely that wasn’t the case. Not everybody was a good shot,” Rademeyer says.

In one of the best scenes in the film, the posse and the Man trade shots. Then, all of a sudden, their guns are empty at exactly the same time. “We shot with the assumption everyone had six bullets,” Walsh says, because each man would have kept an empty chamber in his gun, to keep from shooting himself in the leg while on horseback. “But they’d all be shooting at the same time, tit for tat. The next thing you know, they were all empty!”

In this world full of marginally-good shooters, we see that the Man is Clint Eastwood-fast and accurate. Something we don’t see in most pictures, but we do in this one, is the time it takes to load a cap-and-ball revolver. The Man owns one, as well as a cartridge-loading .44 caliber pistol. “The idea was that he had one that was a new one, a stolen one, and the other was inherited—the older one—maybe it was from the war,” Wallis says.

Throughout the movie, you’ll notice that the Man’s captive, Isabella, loses more and more of her clothing. They wrote it this way, Wallis tells us, to convey how “Isabella is losing her restrictions, her sense of self and inhibitions, her history, as she becomes more and more a part of her new world.”

Because of this transition in Isabella’s character, Good for Nothing is more than just a funny movie, it’s also a romantic one. “There are all of these women between the ages of say, 20 and 40, who used to watch Westerns with their dads, and who are huge fans,” Rademeyer says. “We expected a response [from women] because of the romantic aspects of the film, but we didn’t anticipate the size…. The film is getting huge female response—we have young girls giggling—wow!”