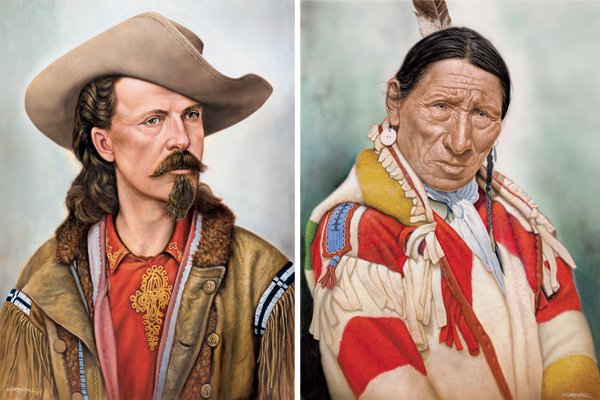 “I’d much rather have my style of art criticized than have someone find a flaw in the historical aspect of the painting,” he admits.

His goal is to create a “pretty” picture that is historically accurate. “The famous Schreyvogel painting of Custer is a very well done piece,” he says, “but I cringe every time I look at it, as some of the uniforms are completely inaccurate for the time frame of history depicted.”

One of the reasons why Crandall’s paintings have been collected since 1977 may be due to his insistence that he place himself in real-life scenarios to help him accurately re-create the past.

“If I’m going to do a painting of a cowboy, cavalryman or mountain man, I must experience that lifestyle,” Crandall says. “I want to know what it feels like to take part in a cavalry maneuver riding in a fully-packed McClellan saddle, to hear the clatter of the horse equipment and be in the field for days with very little water and food chasing hostiles.”

Crandall also invests hours — years, sometimes — into researching details for his art. “Tracking down primary sources, including diaries, letters and Indian ledger art, is part of the thrill of historical background research,” he says.

The artist’s passion to dig for accuracy can be traced to his childhood days when he crawled around on his hands and knees, looking for artifacts in the vacant field where Bent’s Fort used to stand, near his birthplace of La Junta, Colorado. In his junior high years, he read about Kit Carson, Jim Bridger and the Bent brothers’ adventures, which continue to inspire him down the path toward authenticity.

“As I looked out the window, I would pretend to see the tipi camps of the southern Cheyenne, Kiowas and Arapahos who would come to trade at Bent’s Fort,” he says.

Crandall holds a high admiration for those who have “stuck to their guns”  to accurately portray the historic West, such as cowboy artists Tim Cox, Don Crowley and Joe Grandee.

As the Western art world continues to evolve, Crandall plans to remain steadfast on the path he first began as a child crawling around Bent’s Fort.

“I have always been interested in painting in a clear and detailed style, not in bending to the fashion of the day,” he says. “Some artists change their style with the shifting tastes of the art collector. We are now in the Impressionistic stage, but I refuse to pander to that whim in my artwork.”

Jerry Crandall’s List of Historical Inaccuracies Seen in Charles Schreyvogel’s Custer’s Demand, a painting that depicts the December 1868 meeting that secured the surrender of the Kiowa tribes and ended Sheridan’s Indian campaign:

1. The Indian is wearing an 1880 triple loop holster that appears to hold a Colt single action that was not manufactured until 1874. No holster like that existed prior to 1868; it would have been a slim Jim with a percussion revolver. Also, the belt appears to have cartridge loops, which would be wrong for this time frame.

2. The U.S. Army halters, saddles and bridles should be black. Custer appears to be riding an officer’s saddle, which could be leather covered, but probably would have been trimmed with brass in accordance with most officer’s saddles. Also, the saddles appear to have Shoemaker’s 1874 cavalry bits model, which came into service after the Little Big Horn battle.

3. Hats worn by Tom Custer and the officer appear to be 1885 period campaign hats. If they were privately purchased, they probably would not have looked like the ones pictured.

4. The officer on the right is wearing trousers that should be sky blue, not dark blue.

5. Custer is not wearing black U.S. Army issue boots; they could be private purchase, but he probably would have chosen black as the color.

6. The pistol in Custer’s belt appears to be a large Smith & Wesson cartridge revolver, which was not available in 1868. Also, he would not be wearing a pistol stuck in his belt in that fashion; he would have carried in a holster on his side.

8. The saddlebags should be standard issue Civil War saddlebags, which were used until after the Little Big Horn era.

9. The red-and-white guidon in the background did not come into service until 1885; it should be a swallow tail, stars-and-bars guidon that was in service from 1863 to 1885. Ten years after the depicted meeting, in 1878, the 7th U.S. Cavalry did carry red-and-white guidons with a number “7” on the top red field.

10. The gaiters on the officer are of a later period; however, these could be a personal item, but not likely.

11. The cavalry horses would have been branded with a “7” on the rear hip and a company letter on the shoulder.

12. The U.S. Cavalry sabres are distinctly curved, whereas those in the painting are straight like a U.S. Army officer’s sword.