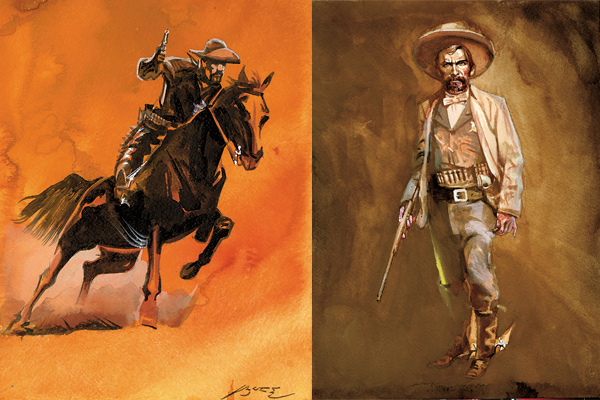 While en route from Arizona back to Texas, cattleman John Slaughter is holding his herd of cattle at John Chisum’s South Spring Ranch near Roswell, New Mexico.

While camped near the Chisum mercantile store, Slaughter receives word that two Texas rustlers, Barney Gallagher (also styled as Gallegher) and a cowboy named Boyd, are in the vicinity. Slaughter believes these two were responsible for stealing some of his herd in Texas. The rustlers made use of a fraudulent bill of sale to cover their theft.

Tanked up on whiskey, Gallagher and Boyd visit the Chisum store where they learn that Slaughter is nearby with his herd. Gallagher rides up to the tail end of the herd and tells the herder, “You tell that little rat-headed son of a bitch up front, I’m here to kill him.”

“Wait right here,” the cowhand tells Gallagher as the drag rider lopes to the front to wave down his boss.

As soon as he hears the threat, Slaughter reins his horse around and comes back through the herd on the jump. Gallagher spurs his horse forward and fires his shotgun, swerving to the side to make sure the buckshot will find its mark. Riding at a gallop, Slaughter pulls a pistol from the pommel of his saddle and fires, hitting Gallagher in the heart and dropping him from the saddle.

This is the version of the fight as told by author Allen A. Erwin in 1965’s The Southwest of John Horton Slaughter. Erwin utilized the memories of several cowboys, including Gus Gildea, who were not present for the fight, but had heard versions of the affair from those who saw it.

Lily Klasner, who also lived in Lincoln County at the time, remembers hearing this slightly different version of the story:

Slaughter recognizes Gallagher and Boyd as they ride toward his camp. He grabs his Winchester, walks around to the back of his chuckwagon and props his rifle on the box for a dead rest. “Hold up!” Slaughter yells. “Don’t come any closer or I’ll kill you.”

Gallagher and Boyd keep advancing at a fast lope. Slaughter fires, and the bullet strikes Gallagher in the thigh. As the cowboy drops from the saddle, Boyd reins his horse into a hasty retreat and flees the scene. Slaughter sends one of his cowboys to fetch someone who can help carry Gallagher to the Chisum store. The closest doctor is at Fort Stanton, some 70 miles away; since Gallagher’s wound is so serious, no one goes to get him.

The store manager makes Gallagher as comfortable as he can while he and several others try to staunch the blood. But the bullet has ruptured an artery, and it can’t be stopped.

Slaughter comes in and apologizes, adding that he was trying to hit the suspected rustler’s horse. “You know me, and you know I’d never let you ride up to me armed after you had robbed me of cattle.”

Gallagher tells him, “I was drunk and didn’t think. I was just coming to talk things over.”

“Well, you ought to have sent someone to tell me you wanted to talk,” Slaughter replies. “I didn’t know; and you can bet I’m not going to let any man who has wronged me ride up to me armed and get the drop on me.”

Two compelling tales, but to me, the second version, Lily Klasner’s account, has the ring of authenticity.

After Texas John Slaughter left the dying Barney Gallagher, Gallagher admitted he had made the mistake of his life by being led into this trouble. He blamed his departed partner, Boyd. He also spoke tenderly of his wife and two daughters and confessed his only dread of death was leaving them. He asked the store manager to send Gallagher’s ring and pocket watch to his wife in Texas. He died close to midnight and was buried near a ditch on the Chisum ranch headquarters.

Slaughter was never arrested for this shooting, but the new governor of New Mexico, Lew Wallace, placed Slaughter’s name at the head of a list of bad men he wanted rounded up. Interestingly, William Antrim (Billy the Kid) was listed at number 14.

Slaughter moved to Arizona where he became a successful rancher and served with distinction as the sheriff of Cochise County.

Recommended: My Girlhood Among Outlaws by Lily Klasner, published by University of Arizona Press, and The Southwest of John Horton Slaughter by Allen A. Erwin, published by Arthur H. Clark Company.