Halloween and the Call of the Wild 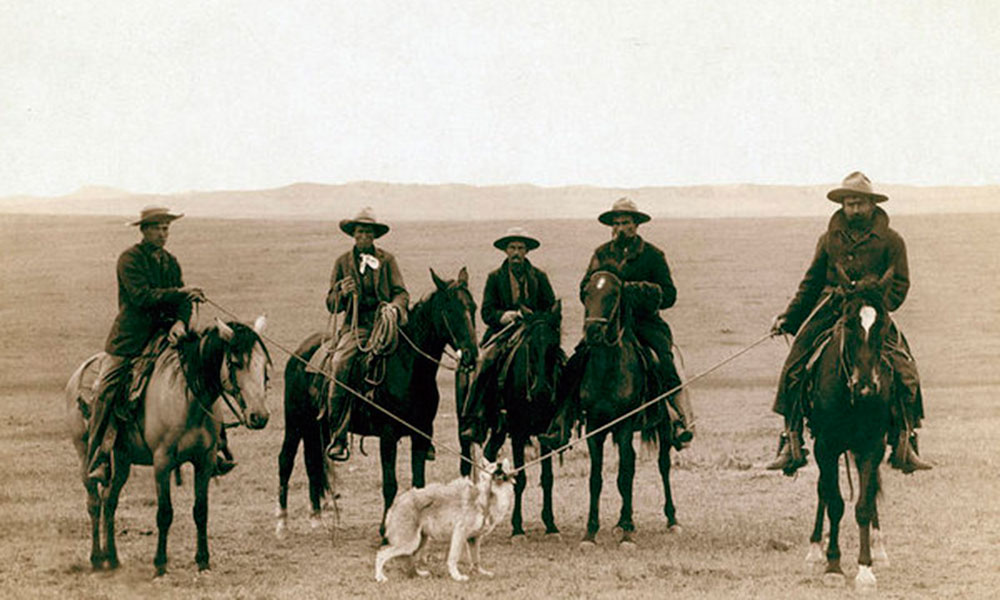 There’s an old folk story told in the mountains of Montana about a band of gray wolves that hunted relentlessly and remorselessly for human babies.  They ate the males but carried the females off and raised them along with their cubs.

A cattleman named Zach and his wife Betty were running a cow outfit in the Beartooth Range.  They had a little one-year-old daughter named Angie. She was a pretty little girl with nut-brown curly hair and hazel eyes.

One moonless night they were awakened by the frightful howling of wolves around the ranch house.  Zach grabbed his shotgun and saying, “Them wolves is after the newborn calves. I’m gonna get me a wolf skin for a rug tonight.

It was so dark he could only see the wolves shining eyes but before he could draw a bead, they disappeared.  Then he felt a sharp pain in his leg as a wolf’s teeth fastened on him. He tore himself loose and fired at the animal.  There was a howl of pain, followed by a whimper of pain, almost human-like. They seemed different from wolves he’d known.  They were different, more like human fiends.

He fired again then ran for the house and slammed the door.  Then he heard the child, Angie scream. He rushed to her room and the crib was empty. A window had been left open to let in the cool night air.

Zach, grabbed his rifle and ran into the night, gripped by fear of stories of demon wolves carrying away babies.  Zach and his cowhands spent the rest of the night searching and came up empty.

There was an old hermit trapper living nearby.  He was an excellent trapper. “Don’t fret,” he said. “If she’s alive, I’ll get her for you.”

Zach, his cowpunchers, neighbors and the old trapper search for weeks and although they found lots of wolf sign, they never found Angie.  The years went and Zach and Betty had more children, twins, but they never gave up hope that Angie would one day be found.

Then came rumors, strange, disturbing and hard to believe.  Now and then a prospector or cowboy or Cheyenne Indian came out of the mountains saying they’d caught a glimpse of gray wolves in the distance and among them was a naked white girl with long brown hair.  The rumors grew and became more frequent.

Zach and Betty decided to hire an old Sioux Indian who was a yuwipi, meaning someone who had a gift for finding lost things.  He tracked the wolves and sure enough he saw the naked girl who ran with the wolves and led Zach and his cowhands to the site.  Using a lamb for bait they set a trap and sure enough the wolves came for the lamb. With them was the girl. They pursued her on horseback and one of them got a rope on her.  Zach instantly recognized her as his long lost Angie. He held out his hand and she snarled and sank her teeth into it.

They brought her home with hands and feet tied and locked her in a room.  She ate only raw meat and flew into a rage when they came near. When they tried to put clothes on her, she ripped them off.

Months went by and she calmed down.  She learned to talk, eat cooked food and wear clothes.  By the time she was eighteen, Angie had returned to the human race.  She made friends and went to dances.

At one dance she met Bill, a handsome rancher’s son.  They fell madly in love but Bill knew nothing about her past.  The less he knew the better, thought Zach and Betty.

Bill and Angie were married.  She looked radiant in her white wedding dress. That night he carried her into the bedroom and at that moment, there was a loud snarling outside.  “Don’t leave me,” she pleaded but Bill went outside only to find himself surrounded by a pack of raging wolves. Then suddenly, they were gone.

He went back in the house, anxious to rejoin his bride but she was gone.  Her wedding dress lay crumpled on the floor and Angie was never seen again.