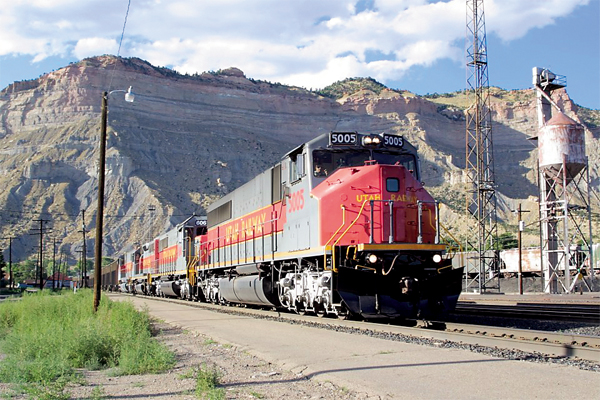 The arrival of the Denver and Rio Grande Western Railway in 1881-82 helped Helper, Utah, fully develop. When the railroad changed the line from narrow to standard gauge in 1889, “helper” locomotives stood ready to aid trains traveling up the steep grade to Soldier Summit, which is how Helper got its name. Today, the town remains influenced by the coal mining industry, and its train yards are still busy with Union Pacific and local Utah Railway train traffic.

Old West Attractions: Nearby Castle Gate was the site of the 1897 payroll robbery by Butch Cassidy and Elzy Lay. While they were planning the robbery, the two lived and worked in Helper. The steps of the Pleasant Valley Coal Company, which Butch walked up to relieve the payroll master of $8,000, are on display at the Western Mining & Railroad Museum (294 S. Main Street).

What historic site do most of the schoolchildren visit?: The Western Mining & Railroad Museum (see Helper’s coal seams above). The walking tour to the museum takes children on the getaway route that Butch Cassidy and Elzy Lay took after the 1897 Castle Gate Payroll Robbery.

Average Housing Cost: A two-bedroom, three-bath home runs around $80,000. For this price, you can also get a historic home built in the 1920s.

Who does everyone in Helper know?: Ron Jewkes, the “unofficial” mayor of Kenilworth, who was born there in 1927 and has lived there ever since.

Helper’s Restoration Plans: Working to get historic homes on the National Register of Historic Places, as they are excellent examples of handcrafted stone construction and feature unique features such as outdoor brick ovens.