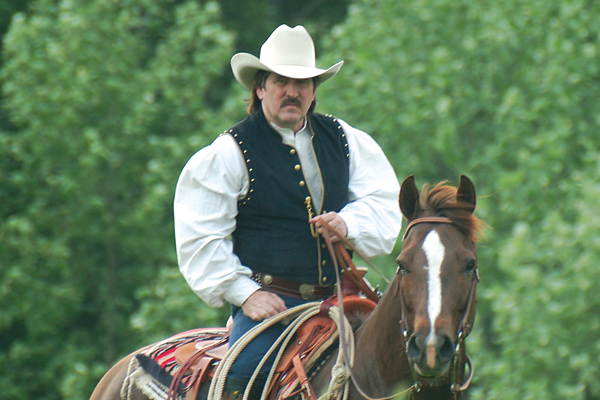 Riding for the Kids

To raise funds for this wonderful organization, singer Royal Wade Kimes has organized the first annual Mount Royal Trail Ride this October 6-7. Riders will begin at the Ozark Mountains just north of Fort Smith, Arkansas, and will enjoy chuckwagon meals, campfire entertainment and a concert by Kimes and his band. Part of the proceeds will help benefit the Future Farmers of America, as well as the Meals for Kids’ backpack program. This charity provides nutritious meals in weekend backpacks to schoolchildren in more than 60 schools in the Fort Smith River Valley of western Arkansas and eastern Oklahoma who would otherwise go hungry over the weekend until they returned to school on Monday.

MISS / ONGOING: In 2004, nearly 70 descendants of Fee Lee Wong visited Deadwood to hold their first family reunion and to urge the Historic Preservation Commission to preserve what structurally remained of Deadwood’s Chinatown—namely, the Wing Tsue building that Fee Lee Wong built in 1896. A group photo taken in front of the Wing Tsue building of those attending the reunion has “become much more than just a cherished reunion memory,” Wong’s great-granddaughter, Edith of San Luis Obispo, California, tells True West. It’s the last she will ever see of the only authentic link to Deadwood’s Chinatown—the building was destroyed, without a permit, this past December  (see June 2006).

In June, the owner of the Wing Tsue building, Gene Johner of Spearfish, testified to the South Dakota Commission on Gaming that the building began to collapse and then fell on Main Street while he and his sons were demolishing two adjacent buildings. He said he had asked for city approval to install support beams on the outside of the building, but that city officials would not approve the request. The building was deemed structurally sound, Deadwood city attorney John Frederickson rebutted, adding that the Johners did not comply with an order that an archaeologist be on site during the demolition of the adjacent buildings, which is a requirement for any project that disturbs ground that could yield artifacts.

The gaming commission has a vested interest in maintaining Deadwood’s historic sites since gaming was legalized in 1989 as a method of generating money for the downtown’s dilapidated historic buildings. Frederickson told The Rapid City Journal that the state may ask the gaming commission to sanction Johner, who is a part owner of the Deadwood Gulch Casino.

The gaming commission will hear testimony from the city’s building inspector, Keith Umenthum, and former historical preservation officer, Jim Wilson, when it resumes the hearing on September 12.

ONGOING: The Historic American Buildings Survey was formed in 1933 by the National Park Service to make work for architects and photographers left jobless by the Depression. Their task was to document America’s architectural heritage. Because of their work, we now have written, photographic, computer and hand-drawn documentation of seven ranches in West Texas, which will be on display at the National Ranching Heritage Center in Lubbock, Texas. The ranches are: Charles Goodnight’s JA Ranch in Palo Duro Canyon; 6666 Ranch House near Guthrie; Charles Goodnight Ranch House in Goodnight; Harold D. Bugbee House in Clarendon; Mallet Ranch House near Sundown; and Daniel’s Ranch and Dorgan House in the Castolon Historic District of Big Bend National Park. The exhibit is open until December 1; visit depts.ttu.edu/ranchhc or call 806-742-0497 for more information.

HIT: The Challenge Double Header Wind Engine, built in 1892, has returned to the Harden Estate in Salinas, California, after three years of restoration work. Grain farmer and dairyman Duncan McKinnon constructed the mill at the house he built in 1881 that now serves as headquarters for the Harden Foundation. Millwright Derek Ogden supervised reconstruction of the wind engine and its 1,300 blades at a machine shop in Bridgewater, Virginia. Public viewing begins this fall; visit hardenfoundation.org or call 831-442-3005 for more information. This foundation, founded by Eugene and Erica Harden, has awarded more than $45 million in grants to nonprofit groups in Monterey County.