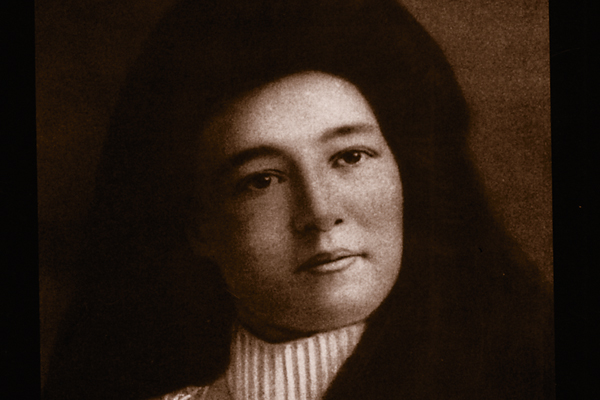 They called her the “Saint of Cabora” and “Queen of the Yaquis.” Some saw her as the Mexican Joan of Arc.

A dictator thought her “the most dangerous girl in Mexico” and ordered her exiled to Arizona Territory; indeed, her name was the battle cry of a doomed revolution.

Yet Teresita is not a name that many will recognize. She is largely forgotten, even though she was arguably the most famous Mexican woman in two nations at the turn of the 20th century. She’s almost never found in the dozens of books profiling interesting characters of the Old West, even though her story was often told in the popular press of her day.

The scope of her fascinating, 33-year life is best summarized by her biographer, William Curry Holden: “Although she never owned a weapon or led an army, she unwittingly inspired hundreds of brave men and women to go to their deaths shouting, ‘Long live the Saint of Cabora.’ She possessed extraordinary psychic abilities and powers rarely heard of at the time. She cured tens of thousands of people of real or imaginary ills without remuneration of any kind, modestly contending that her gifts were God-given to help the afflicted. The title of ‘saint,’ which she never accepted, was not conferred on her by an ecclesiastical authority, but by hundreds of thousands of Mexicans and Indians who loved and adored her.”

Teresa was born in Mexico on October 15, 1873, to a 14-year-old Tehueco Indian girl named Cayetana Chavez. Her light, Spanish characteristics were in sharp contrast to her dark mother and made it obvious who her father was—the patron of the ranch where her mother worked. Teresa grew up in an aunt’s shack, abandoned by her mother and ignored by her father for her first 15 years.

Don Tomas Urrea and his legal wife, Loreto, already had three of the 10 children their union would produce by the time he fathered Teresa. He would eventually ensconce his wife in a fine home in Alamos, while he built a casa grande (big house) at his Sonoran ranch in Cabora. He lived there with his young mistress, Gabriela, with whom he’d have several more children.

But Don Tomas did not forget Teresa. When she was 15, he brought her into his ranch home and embraced her as a proud father. He would eventually put his life and his fortune on the line to protect her.

Teresa was put under the wing of an elderly Indian healer, or curandera, named Huila, who ran the household. Huila soon saw something special in Teresa and took her along on her healing trips to the homes and tents of the farm families.

Teresa had been at the ranch about two years when a ranchhand tried to rape her. The shock of the attack put her into a coma for three months. She faded so completely, she was pronounced dead. Her father had a coffin built for her, and Huila prepared her for burial, laying her out in a white funeral dress with her hands entwined with a rosary. Her awakening seemed like a resurrection.

After that, she spent most of her waking hours ministering to the sick, as word quickly spread of her remarkable healing powers. Her biographer notes the size of the crowds that came to see her daily, stating “A newspaper reporter from Las Cruces, New Mexico, estimated the crowd at five thousand the day he was there in November 1891. A reporter from El Nacional in Mexico City put the number at approximately ten thousand at the time of his visit in May 1892.”

The ranch was becoming the Lourdes of Mexico, as Teresita cured the lame, blind and deaf. Witnesses said she could shrink tumors and end pain. And for none of this would she charge a cent. She said these were “God’s gifts” and not meant for her personal enrichment.

Soon, the Catholic Church denounced her as a heretic. Her most vocal opponent was Father Manuel Castelo, who called her “a monstrosity from hell, Satan incarnate,” Holden writes.

The priest’s words did not alter the belief in her by the Indians who saw her as holy—the same native people who were being robbed of their land by the corrupt government of Porfirio Diaz. Although Teresita did not venture into politics and was adamant that violence would never solve a problem, she did present a simple message of justice. To these struggling people, she became a symbol of hope.

The most famous example of this was the devotion of the Tarahumara Indians from the village of Tomochic. They adopted her as their patron saint and installed a statue of her inside their Catholic church. When Father Castelo visited, he demanded they remove her visage and preached that they were “dupes” for not seeing her as a vehicle of the devil. Instead of obeying his dictates, as would be expected at a time when the church’s power was unquestioned, the parishioners ignored him.

Father Castelo sent an angry and hysterical letter to his bishop, stating that the Indians in Tomochic were in a state of “revolt.” The Diaz government was already suspicious of the village and feared they aimed to lead a revolution. Diaz ordered the village destroyed. The odds were 23 to one against the Indians as army units attacked, but the 69 male defenders held out for 10 days. In the end, everyone and everything was destroyed. The massacre fed the call for revolution, and many hoped it would galvanize the Indians of Mexico like the Alamo had galvanized the people of Texas in 1836.

Mexican historian Mario Gill called the destruction of Tomochic the “most monstrous” of all the crimes of Diaz and noted Teresita was their inspiration to revolt. “Her name was their battle cry, and was on the lips of the Tomochitecos unto the death of the last man,” he wrote.

Although Diaz blamed Teresita for instigating the rebellion at Tomochic, historians have found no direct evidence she was involved. In fact, one of the generals who sacked the village found letters Teresita had written to the town’s leader. “She recommended tolerance and love for one’s neighbors, aid for the destitute, mercy by the victors, and succor for the dying,” Capt. Francisco Castro wrote. “At no place in the famous letters did she incite rebellion in any manner.”

Diaz ordered her exiled to the U.S., and Don Tomas went with his daughter through the border crossing at Nogales into Arizona Territory. They arrived on July 5, 1892.

She immediately attracted new attention. So many came to see her that businessmen took up a collection to buy her a house so she’d stay in Nogales. Mexican ex-patriots who hoped to overthrow Diaz begged her to lend her imprint to the revolution. She steadfastly refused. When they couldn’t convince her outright, they involved her by implication, printing flyers with her picture and a call for a revolution. Many went into battle with those flyers tucked into their shirt pockets over their hearts. They called themselves “Teresitas.”

Back in Mexico City, the government quickly saw that it had lost control of Teresita by expelling her and moved to have the U.S. send her home. Instead Don Tomas and Teresita applied for American citizenship, moving farther into Arizona. For awhile they lived in El Paso, Texas, before finally settling in the copper mining community of Clifton, Arizona.

These were the “happy days,” family members report, as people came from around the world to Clifton to be healed.

But then a most uncharacteristic thing happened. On June 22, 1900, Teresa defied her father to marry a miner named Lupe Rodriguez. The day after her nuptials, Don Tomas tried to kidnap her and return to Mexico. He shot at her when she resisted. Later, she wondered if he hadn’t been sent by Diaz. But although she went home to her father’s house, the rift between them never mended.

When she was offered a trip to California to heal a sick child, she jumped at the chance. California newspapers spread her fame after she cured the child, and a “medical company” offered to pay her $2,000 a year for five years to spread her ministrations across the country. Over the next four years, she traveled coast to coast. She “married” her translator, John Van Order, although, Holden reports, “her divorce from Rodriguez would not be official for some three years.”

Teresa and John had two daughters, Laura, born in 1902, and Magdalena, born in 1904. The second child arrived shortly after Teresa returned to Clifton, where she built herself a home and John disappeared. By then, Don Tomas had died.

Two of Teresita’s nieces still live in the Don’s home in Clifton. “Our father [one of Don Tomas’ sons] told us what a beautiful person she was,” Terri Urrea tells True West. “She was beloved.”

As she had predicted when she was a young girl, Teresa died in her 33rd year. The diagnosis was consumption. She’s buried in Clifton on a hill overlooking a breathtaking landscape. Some say they can smell roses when they visit her grave, just as people thought they smelled roses each time she healed the sick.

For a few years in the 1990s, this mining town held a fiesta in her name, hoping to help “heal” a community that had been torn apart by a strike and a devastating flood. Some dream of resurrecting the fiesta in the future to honor the woman who touched so many lives.