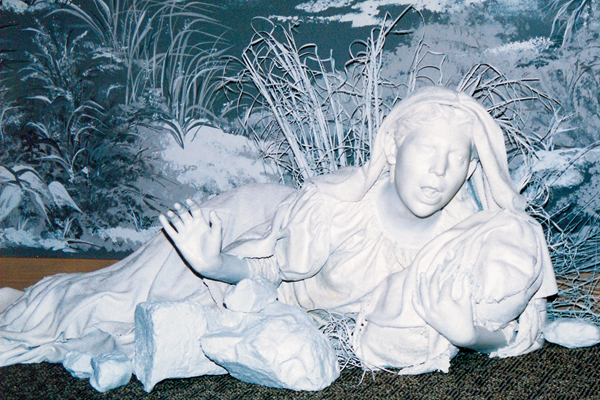 In 1835, a small group of Cherokees traded the tribe’s land east of the Mississippi River for land in the Indian Territory (present-day Oklahoma).

Because the rest of the tribe hadn’t approved the trade, they refused to move from their homes. In the summer of 1838, the U.S. Army forced them out, herding the Cherokees west on what became known as the Trail of Tears.

“Cherokees [were] arrested and dragged from their homes, and driven at the bayonet point into the stockades,” wrote Private John G. Burnett, adding that during the journey west, the Cherokees slept on the ground without a fire or in freezing wagons, and in one night, as many as 22 died of pneumonia.

“We bury them by trail and go on” is mentioned over and over by trail survivors, who passed down their stories of hardship to descendants like Mary Tidwell, whose great-great grandmother lost her mother along the trail.

After arriving in the Indian Territory, many more died, weakened from the journey and being forced to settle in a place without adequate shelter, food and medicine. “I will laugh no more while living,” said one dispirited trail survivor in 1929, “but when new land is reached in skies and all my people … meet me again, then … I make joyful laugh.”

Although the tragedy could not be lifted from their hearts, the Cherokees had no choice but to adapt to their new homeland. So as not to forget the wails of their ancestors, today’s Cherokees developed an emotional exhibit of the Trail of Tears at the Cherokee Heritage Center in Tahlequah, Oklahoma.

Today’s generation has memorialized their forebears in an impressive beadwall, made from clay beads. The backs of the panels contain the names of the artists and their trail ancestors.

Cherokee artist Mary Foreman designed the overall pattern for the 16,000 beads that represent the total number of Cherokees sent to the Indian Territory. The lower “footprints” of 2,000 black beads reflect a conservative estimate of the number who died along the trail. The first detachment’s physician, Elijah Butler, reported that there were 4,000 Cherokee deaths on the trail. This higher number is reflected in the upper “footprints” of 2,000 red beads. The 4,000 red and black death “footprints” are surrounded by 12,000 white beads representing the Cherokee survivors and symbolizing hope.

The museum’s six-gallery exhibit concentrates on the Cherokees’ preremoval, court battles, imprisonment, the forced removal of other tribes, the Trail of Tears and the rebuilding of the Cherokee Nation.

“Most Cherokees prefer not to talk about the trail,” Archivist Tom Mooney says.  Yet, the Trail of Tears story must be told he adds, and other Cherokees, such as Chief Chad Smith, were “adamant that we portray the harshness and unfairness of the experience.”