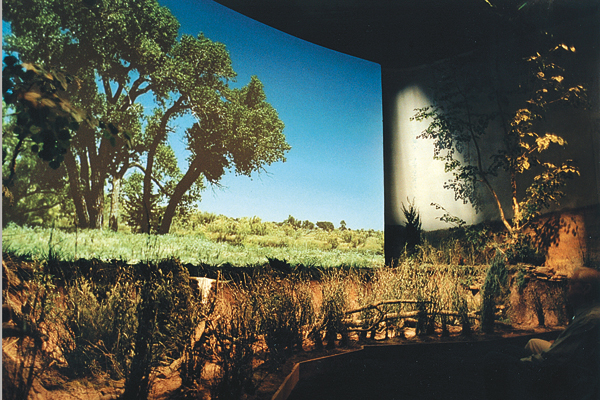 When you think of Butch Cassidy, you probably don’t imagine him as a rancher in the Dubois badlands of the upper Wind River Valley. But during the fall and winter of 1889-90, before Cassidy embarked on his outlaw career, he and his partner Al Heiner did just that, while making their home on nearby Horse Creek.

The Wind River Historical Center makes only a passing mention of Cassidy and instead focuses mainly on the Sheepeater Indians (a.k.a. Mountain Shoshonis), who spent their summers hunting in the high country around Dubois, while wintering in sheltered valleys. When Yellowstone National Park was created, the tribe was brought to the Wind River Indian Reservation as part of the agreement made with Shoshoni Chief Washakie in the Fort Bridger Treaty of 1868. Tours to Sheepeater sheep traps, rock art sites and other archaeological locations are available by reservation during the summer.

Wilson Price Hunt led a party of fur trappers through the Wind River Valley in 1811, crossing the Continental Divide at nearby Union Pass. Called Astorians, they were members of John Jacob Astor’s Pacific Fur Company, on their way to Fort Astoria on the Oregon Coast. Another mountain man, Jim Bridger, led an expedition through this area while searching for a route to the headwaters of the Yellowstone River through the Absaroka Mountains. From June 21-August 30, you can find out more about the mountain men and Sheepeater Indians during the museum’s Free Monday programs.

Dubois’ first settlers arrived in the late 1870s, naming their frontier community Never Sweat. (The name may refer to the male town residents’ poor work habits, or it could be a reference to the Chinook winds that warm the valley in the winter and carry a mild breeze in the summer.) The town’s first post office was christened after Idaho Sen. Fred T. Dubois, thus changing the town’s name.

The history of these homesteaders and of the later Scandinavian tie hacks (loggers who cut railroad ties for the Wyoming Tie and Timber Company from 1914-1946) is interpreted in eight historical cabins, which include Maxwell’s saddle shop, the Sheridan Creek Ranger station, a homestead with Nettie Stringer’s kitchen and the Old Dunior post office building with tie flumes.

This year’s special exhibits are on loan from the University of Wyoming’s American Heritage Center. In July, see Chief Washakie: Through the lens of time (do not miss the Wind River folk art exhibit on July 17); in August, check out Owen Wister’s The Virginian 1902-2002 (celebrate Archaeology Day on August 6); and in October, visit the exhibit on the Bozeman Trail diaries of Robert Dunlap Clarke.