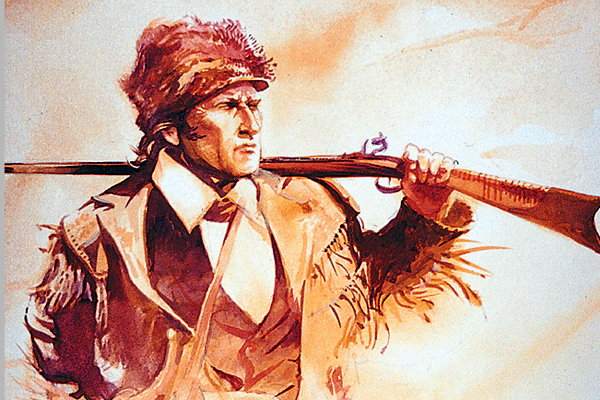 Wes Hardin is drunk and furious.

“I’ll go and get a gun,” he bellows at John Selman, Sr., “and when I meet you I’ll meet you smoking, and make you shit like a wolf around the block!” The two part ways.

Later that night, Hardin is standing at the bar, just inside the front door of the Acme Saloon in El Paso, Texas, rolling dice for drinks with a local grocer. According to the clock on the wall, it is the eleventh hour, but for the aging gunfighter, the seconds are ticking to eternity.

“It was a hot night,” Patrick McGeeney later testifies, “sultry, with heavy humidity.” Two old cattlemen are seated at a nearby table in the smoky din, relating their adventures with Cochise, Geronimo, John Ringo, Pat Garrett and Billy the Kid.

“Hoss piss on you,” Wes Hardin bellows, grumbling at the ivory numerical combinations on the bar.

“You have four sixes to beat,” Hardin says as the dice tumble to a stop on the hardwood bar top.

Stepping through the swinging doors, John Selman, Sr. fires his pistol, hitting Hardin in the back of the head.
The bullet exits above Hardin’s left eye, hits the mirror behind the bar, shattering it. Crumpling to the floor, Hardin falls face up, as Selman steps over him and fires three more times, hitting Hardin in the chest and taking the tip off the gunfighter’s pinkie on his left hand.

That’s how Hardin died. But the bigger question is why?

“I met Wes Hardin about 7 o’clock last evening close to the Acme Saloon. When we met, Hardin said:?‘You’ve got a son that’s a bastardly, cowardly son of a bitch!’ I?said, ‘Which one?’ Hardin said: ‘John, the one that’s on the police force. He pulled my woman when I?was absent and robbed her of $50, which they wouldn’t have done, if I?had been here.’ I?said:?‘Hardin; there is no man on earth that can talk about my children like that without fighting, you cowardly son of a bitch!’ Hardin said:?‘I am unarmed.’ I said:?‘Go and get your gun; I?am armed.’ Then he said:?‘I’ll go and get a gun and when I?meet you I’ll meet you smoking, and make you shit like a wolf around the block.’

I said he’d be the first man that ever did. About 11 o’clock I?came into the Acme saloon to take a drink with Mr. Shackelford. Shackelford said to come in and take a drink with him but not to go to getting drunk. I told him I would not get drunk for I expected trouble. Hardin threw his hand on his gun and I grabbed mine and went to shooting. He threw his hand back on a gun in his hip pocket before I pulled and went to shooting.”

May You Be Found Among Lawyers

Out of prison a mere 18 months, John Wesley Hardin has landed in a strange, new world. His children are grown, with families of their own. He suffers constant pain from numerous old wounds; the buffalo are gone—not to mention the Daltons, Jesse James and Billy the Kid—the great cattle drives are ancient history and in fact, many of the cowtowns Hardin hurrahed in his heyday are now cities. And to make matters worse, Hardin is now an attorney, summing up the old gypsy curse: may you be found among lawyers.

For a time after his release from prison in February 1894, Hardin stayed away from saloons and gambling halls, but a disastrous 10-day marriage to a young, flirtatious teenager has left him depressed and embittered. Gradually he has returned with a vengeance to the life he had sworn to forsake. To boot, a disastrous run for sheriff in Gonzales, Texas, has sent the aging ex-gunfighter tumbling westward.

The El Paso Daily Times welcomed the well-known shootist, reporting that “forty-one years [has] steadied the impetuous cowboy down to a peaceable, dignified quiet man of business.”

Hardin, who probably paid for the kind newspaper comments, is hanging onto his peaceable dignity by his fingernails. He will not hang long.

A Shady Lady & A Murky Murder

In early April 1895, Attorney Wes Hardin is approached by a sexy, ex-prostitute—Mrs. Beulah M’Rose—who tells a woeful border tale of injustice and wrongful arrest. Her Polish cowboy husband, Martin M’Rose, has been jailed in Juarez, Mexico, where the authorities took some $1,800 in cash from her, which she maintains is from the legitimate sale of her husband’s cattle ranch near Eddy, New Mexico.

Hardin agrees to take the case. He immediately retains a Mexican lawyer and talks to the American consul in Juarez. After Hardin spreads around sufficient cash, the Mexican Supreme Court orders the release of Martin and a friend. Both remain in Juarez, awaiting naturalization papers.

In addition to taking the case, Hardin also takes his vivacious client to bed. While in bed, the counselor advises Mrs. M’Rose not to send additional money to her husband (a reported $3,400).

Martin is not happy on hearing this and is intent on getting back his wife, or at least his money. Unfortunately, he’s wanted for rustling in the U.S. and has a $250 price on his head. In Juarez, Martin confers with U.S. Deputy Marshal George Scarborough, who agrees to meet the cuckolded husband in the middle of the international bridge separating Juarez from El Paso and escort him to a secret rendezvous with his estranged wife. Martin walks directly into an ambush and is shot dead by U.S. Deputy Marshal Jeff Milton, Texas Ranger Frank McMahan and, some say, Constable John Selman, Sr.

The lawmen claim they killed Martin for the reward, but rumors circulate that Wes Hardin had the most to gain from the death and had planned the assassination and paid the gunmen. Hardin, while drunk, admitted as much, bragging he paid Scarborough to kill Martin. Enraged, Scarborough forced Hardin to accompany him to a newspaper office to dictate a retraction. Hardin complied meekly.

When Hardin went out of town on business, Beulah got drunk and combative. Disarmed, she was arrested and thrown in jail by Constable John Selman, Jr. “Old” John Selman claimed this arrest sparked the fight between himself and Hardin.

In El Paso, Wes Hardin mingled with a vicious set of men who thrived beneath the dark underbelly of the West’s rowdiest border town. Only one of them lived to old age.

January 9, 1871
Hardin is arrested in Longview, Texas, and charged with horse theft and four counts of murder. By now he has murdered eight men. On his way to Waco to stand trial he kills a guard and escapes.

February 29, 1872
Hardin marries 14-year-old Jane Bowen. They have three children together, but he is rarely home.

October 5, 1878
After killing some two dozen men (Hardin claims 27), he enters prison at Huntsville, Texas, where he has been sentenced to serve 25 years of hard labor.

February 17, 1894
After serving almost 16 years, Hardin is released. He walks out of prison a widower with three grown children. He also has a law degree.

“Starr Undertakers removed the body, and during an examination at the mortuary, they recorded numerous scars. Two side-by-side gunshot wounds were above the right hip bone. The left thigh midway between the knee and the groin had a gunshot wound, and a similar abrasion existed on the inside of the right thigh. A wound glistened on the back of the right elbow, and a large knife scar with several adjoining smaller scars appeared below the rib on the left side.”

At his murder trial, John Selman, Sr. testified he was actually in the Acme Saloon prior to the shooting and sat at a table with a friend. Selman testified that he knew John Wesley Hardin was watching him in the mirror behind the bar, claiming (or at least implying) that Hardin was waiting for an opportunity to kill him. At some point, Selman went outside to talk to a friend who advised the constable not to get drunk.?When they turned to go back inside, Selman suddenly pulled his pistol and shot Hardin from behind.

As to a motive beyond the threats, some historians speculate Hardin paid the other Martin M’Rose shooters, but didn’t pay Selman, and that led to the shooting.

However, Hardin biographer Leon Metz is blunt about the why of it: “When it comes right down to it, we don’t really know why Selman shot and killed Hardin. We do know that Selman and Hardin argued in the street shortly before Hardin’s death, but about what we don’t know.”

As with many of the Old West shoot-outs, while we may never know the true cause, the deadly mixture of liquor, guns, pride and threats was usually more than enough fuel for the fire.

Beulah M’Rose fled El Paso prior to Hardin’s death and ended up in Phoenix, Arizona, where she disappeared from history.

Selman’s first trial ended with a hung jury. Before his next court date, however, he was killed by none other than George Scarborough, but that’s another Classic Gunfight.