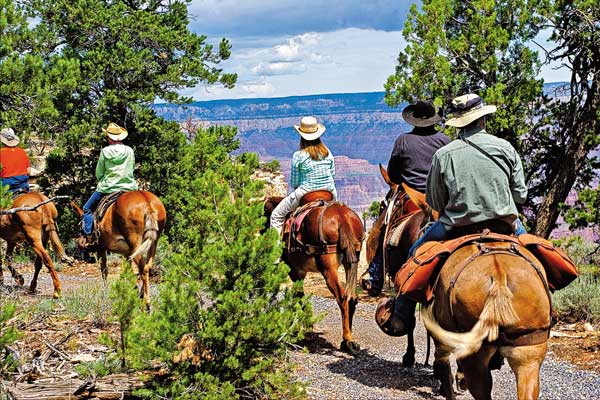 Nobody warned me about this.

Oh sure, the folks in charge of mule rides at Grand Canyon National Park gave me that spiel about safety and risks, like getting bucked off, or struck by lightning, or kicked in the head, or thrown into the abyss. Injury and death? I deal with that every day. But this?

The mule in front of me, an evil critter named Algebra, just farted.

And I have nowhere to go. Turn left, and I’ll be slapped in the face by piñon branches. Right, and I’ll drop over the rim—and the Colorado River is a long way down. I can only hold my breath and look at the view.

Which, if I turn away from Algebra’s butt, is pretty spectacular.

The Canyon Vistas Mule Ride can take up to 20 riders on a four-mile, three-hour interpretive ride that departs from and ends at the circa-1920s Yaki Barn, five miles east of Grand Canyon Village. Don’t worry. You don’t have to hike from Bright Angel Lodge. Van service is provided from the village’s main livery barn.

Riders get bota bags instead of canteens because bota bags don’t bounce. After all, you don’t want to spook your mule. Unfortunately, the organizers ask you to fill yours with water and not Barolo.

Mules, of course, have a long history with Grand Canyon tourism. Back in 1887, the van driver tells us on our way to Yaki Barn, Capt. John Hance began offering mule rides. The Fred Harvey Company—of Harvey House fame—took over the mule rides in 1904. Since 1968, Xanterra has ramrodded the mules.

While up to 10 riders a day may still opt for an overnight ride to Phantom Ranch, the Canyon Vistas excursion is available for those with less time
and less skill. Which is why they put me on Charlotte.

At Yaki Barn, my fellow riders and I are instructed on mule maneuvers. We are handed a quirt, which, in these days of political correctness and not wanting to offend a mule that, with one false step, can ruin your Grand Canyon adventure, is hereby referred to as a “mule motivator.” Mules, by the way, are sure-footed and not prone to taking false steps.

Then we mount up and hit the trail, riding through the pine-scented forest until we emerge, and there she blows. “That’s the beauty of the canyon,” says Jon Streit, Xanterra South Rim’s general manager. “You can’t see it until you get there.”

Seeing the Grand Canyon from the back of a mule is a magnificent experience. Our guide stops to talk about geology (“rocks for jocks,” as we called those classes in college); the forest (Charlotte, I learn, will try to eat anything, including juniper bark); John Wesley Powell (who, silly man, shunned mules for boats during his 1869 Colorado River tour); and other subjects that I can’t hear because Algebra has farted again.

But that’s all right. One day, I’ll do this ride again. Only next time, I’ll be riding Algebra.

Johnny D. Boggs recommends reading Over the Edge: Death in Grand Canyon—but only after you’ve finished your mule ride.