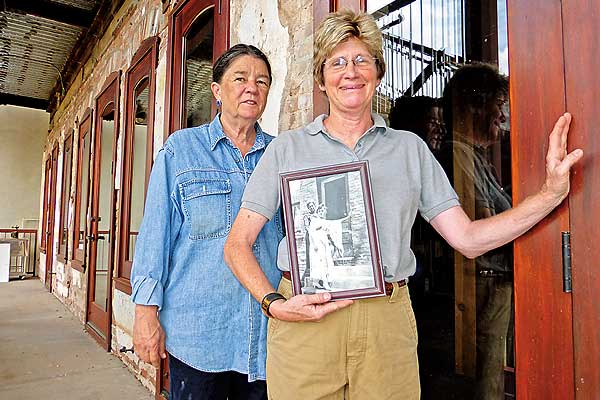 If the old girl were still around—if Madam Jennie Bauters could see her “crib” and hotel now—she’d probably fan herself with an ostrich feather and say, “Way to go, girls!”

“Jennie’s Place” in Jerome, Arizona, will likely survive another hundred years because of the new life given it by the foresight, endurance and just plain stubbornness of Mary Wills and Sally Dryer.

The women are going on a decade now since they started restoring Jennie’s Place on Main Street that houses not only a hunk of the colorful history of this hillside mining camp, but also their kaleidoscope store, Nellie Bly.

The whole town of Jerome—a town so close-knit, they get together yearly for a portrait of all the residents—has supported their efforts. It’s not just altruism that moves everyone. The plain truth is that if this building crumbled as it threatened to do, there would be a big, ugly hole in the heart of Jerome.

So, Wills and Dryer did what folks throughout Arizona have done since 1990, when voters were wise enough to pass the Heritage Fund, demanding part of the lottery funds go for historic preservation, wildlife and parks. They applied for a grant and received $150,000 in 2007.

Then came the economic recession in 2009. Although the legislature couldn’t sweep the Heritage Fund, the state parks board that controlled it could and did, to heal itself from $34 million in legislative budget cuts. (A loophole voters had never expected, since the parks folks were supposed to be friends.)

The big oversized check from the fund that had been so joyously displayed in the window of Nellie Bly’s was updated: great big black letters proclaimed, “Insufficient Funds.”

The women found nothing funny in the loss of the grant—at that moment, they had just ordered $98,000 worth of steel to reinforce the building they were temporarily holding together with cables.

“Our building is worse off now than before we started,” said Dryer at the time, a woman who, as a little girl, had provided the voice for “Lucy” in the Peanuts TV specials.

Media attention helped turn the tide and the grant was eventually restored—but the women quickly learned the project was far more expensive and time consuming than they had planned. They mortgaged their home, and friends gave them loans to carry on. “The support we’ve gotten has just been unbelievable,” Dryer says.

“We love Jerome, we love old buildings, but this was just stupidity—if you really knew what it took to restore a 100-year-old building, you’d never do it,” says Wills, as she proudly shows off the new steel struts that are the backbone for the four-story building that will provide new shop and office space—and maybe a restaurant—for the town that exists on tourism.

What would Madam Jennie, one of the richest women in Arizona Territory, have to say about all this?

“She was all business and knew how to squeeze that bottom line,” says Wills. “And she’d think we were nuts.”