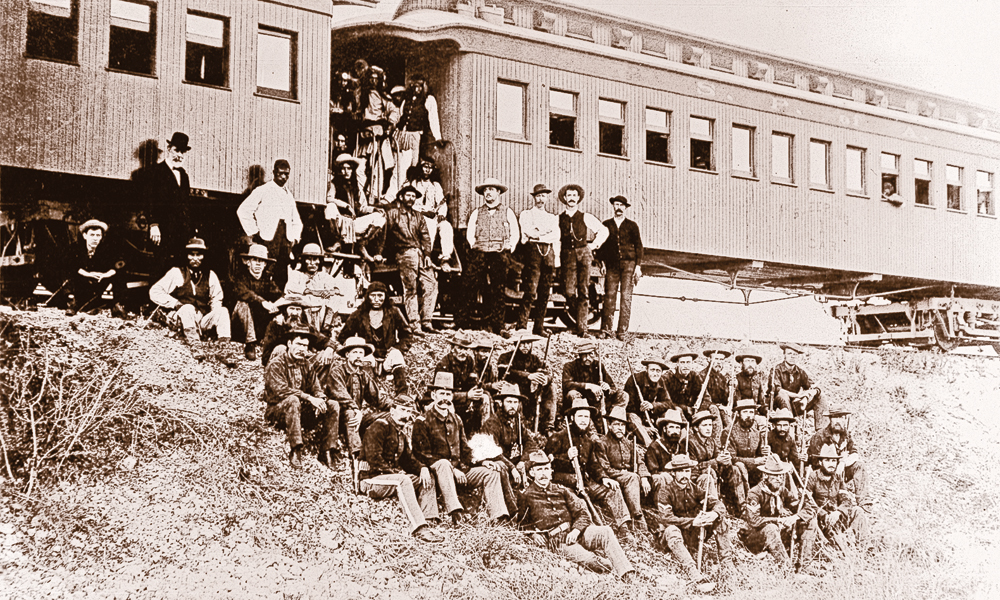 Five thousand against 140! With Geronimo’s breakout from the San Carlos Reservation in Arizona on May 17, 1885, the U.S. Army conducted the most lopsided campaign in American history. Fully one-fourth of the entire army was either put on alert or ordered to the field. For 16 months, the troops trailed the escapees, patrolled both sides of the Mexican-American border, and guarded mountain passes and water holes, denying the fleeing Apaches from using them. The Apaches continually raided in both countries, leaving behind dozens of dead and massive destruction of livestock and property. In the quest to subdue Geronimo, soldiers and Apache scouts alike endured some of the most grueling campaigning in the arid, treacherous landscape of the American Southwest and Mexico, where the blistering heat often reached over 115 degrees.

After a four-month long, 2,000-mile chase, a handful of American officers, under the 4th Cavalry’s Capt. Henry Lawton, with a small detachment of his troopers and some mounted infantrymen, along with 30 Apache scouts, finally brought in the exhausted band. Geronimo, who only had a couple dozen warriors with him when he fled San Carlos with 139 other Apaches, had but 34 people left, including a mere handful of fighting men, when he finally surrendered in September of 1886.

Because a mobile mounted force was required to keep after the fast-moving and elusive Apaches, much of the work fell to the cavalry, whose primary weapon was the carbine. During this campaign, the issue shoulder arm of the U.S. horse soldier was largely the single-shot Springfield “Trapdoor” carbine—the very same arm used by Custer’s troops during the disastrous 1876 Battle of the Little Big Horn.

For much of the Indian Wars, the 1873 Springfield, which traces its ancestry back to the 1866 Allin conversion rifle-musket, was the standard issue longarm of the military. Adopted that same year, these Springfields went through constant minor improvements. A review of all of the variations here would require too much space, so suffice it to say that the Models 1877 and 1879 Carbines, official government designations, upgraded from the first 1873 model and produced by Springfield Armory in Springfield, Massachusetts, from 1877-’78 and 1879-1885 respectively, were the mainstay of the U.S. Cavalry during Geronimo’s 1885 outbreak. The Apache scouts used Springfield carbines and “Long Tom” rifles.

About 4,500 of the ’77 models and 15,000 of the ’79 models of the 1873 Springfield were made. This side hammer carbine weighed about 7 pounds and was 41.3 inches in length. It fired the powerful .45-70 cartridge with a 405-grain lead bullet, although the cavalry usually used the carbine load with 55 grains of black powder rather than the rifle’s 70-grain charge. Guns were arsenal dull blued overall, except for the case-hardened breechblock and barrel tang. They had 22-inch round barrels, and flip-up breechblocks. In improving the initial 1873 model, their black walnut stocks were strengthened by shortening and thickening their wrists, and stock combs were lengthened to 10½ inches, and a compartment with a swiveling trapdoor on the butt plate—thus the “Trapdoor” moniker—was drilled into the butt stock for a three-piece cleaning rod and broken shell extractor. Stacking swivels were eventually eliminated from the barrel band, and rear sights were improved. The “1873” date was removed from the lockplate, leaving just the stamped eagle and “U.S. Springfield” on two lines.

Although a small number of bolt-action Winchester-Hotchkiss repeaters were possibly taken along with the Springfields into the field by B Troop of the 4th Cavalry, who accompanied Capt. Lawton in the final campaign, it was the Trapdoor Springfield that remained the trooper’s carbine of the last Geronimo campaign.