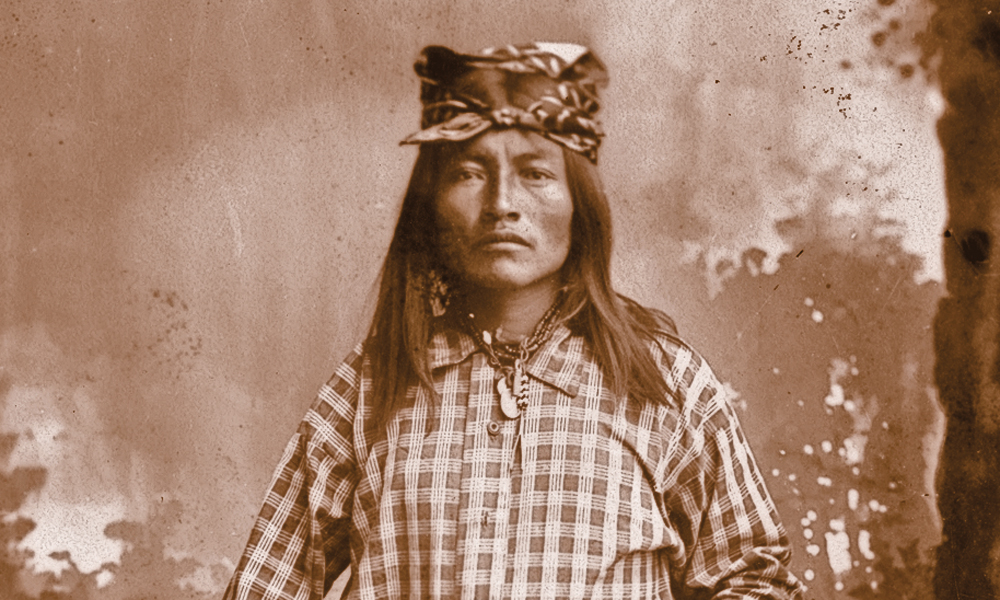 Captain Emmet Crawford is on the brink of victory. Yesterday, his punitive raiding party of three officers, one medic, one interpreter and 79 Apache scouts completely surprised and captured  all the provisions and horses of Geronimo’s stronghold at a rugged place called Espinosa del Diablo—Devil’s Backbone—in Sonora, Old Mexico (see map).

Before Crawford or his men can react to the news, the Tarahumaras, taking up positions in the rocks above the camp, send in a volley from their Springfield breechloaders. Three Apache scouts are wounded, one of them in his sleep.

Several Apache scouts return fire from a ridge east of the camp, while Capt. Crawford runs with Lt. William Shipp, Lt. Marion Maus and Chief of Scouts Tom Horn to find out what is happening.

Maus and Horn repeatedly identify themselves as American soldiers. Scattered firing continues for 15 minutes, but with the constant pleading of the American officers, it finally stops.

Incredibly, the three Americans —Crawford, Horn and Maus—are unarmed as they proceed out of the rocks to meet 10 heavily armed Mexican troops under the command of Maj. Mauricio Corredor (the major is a well-known Mexican soldier who is credited with taking down Chiricahua Apache Chief Victorio roughly six years earlier).

Horn is about 100 feet in advance of Maus when he sees Crawford waving a white handkerchief as a sign of peace. Corredor and four of his men ignore Horn and walk past him.

A Mexican sniper fires, hitting Crawford in the forehead. Corredor turns and smiles at Horn, then fires at the unarmed scout, hitting Horn in the arm. One of the Apache
scouts, Dutchy, shooting Corredor through
the heart.

The next day, Maus opens up a dialogue with the attackers. He goes to the enemy’s camp, along an interpreter, and brokers a cease-fire.

The fighting is over, but the U.S. border is a long ways from the
Devil’s Backbone.

Maus is effusive in his praise of the Apache scouts who accompanied the command into Mexico, saying, in part, “Their system of advance guards and flankers was perfect, and as soon as the command went into camp, outposts were at once put out, guarding every approach. All this was done noiselessly and in secret, and without giving a single order.” But he also admits, “It was impossible to march these scouts as soldiers, or to control them as such, nor was it deemed advisable to attempt it.”

A few days before the gunfight, Crawford and his command left their camp in Nacori. They ditched their horses and proceeded on foot, bringing along three of their “toughest mules.”

To some historians, the fight on the Devil’s Backbone on January 11 was the highlight of Tom Horn’s career. Horn biographer Larry D. Ball is among them. He tells us, “The morning of the fight was rainy and visibility very poor. Crawford did not put out sentinels, but permitted everyone—exhausted from the previous march to the hostile camp and the following battle—to sleep in. It was a tragic error on Crawford’s part. Since the Chihuahuan militiamen thought they had surprised the renegades’ camp, they did not hesitate to attack. Only after the Mexicans opened fire for a second time did it become apparent that they were a treacherous lot.

“While Maus did receive the Medal of Honor, he recommended Horn for some sort of recognition in the general order praising all the participants, but this request was refused.

A deputy U.S. marshal from Tombstone, Arizona (Maus does not name him), surprised the Crawford detachment in Nacori. The marshal had traveled several hundred miles into Mexico to arrest the Apache scout Dutchy on a murder warrant (he was accused of killing a miner near Fort Thomas).

After the January 11 battle, Tom Horn and Marion Maus met with the Mexican officers and allowed medical aid for wounded Mexicans. Captain Emmet Crawford, while still alive, remained unconscious. The next morning, the Mexicans called Maus to their camp to discuss the use of mules to transport their casualties. After he arrived, they refused to let him leave and demanded to know his right on Mexican soil. Only after they got the requested mules did the Mexicans permit Maus to depart.

On January 15, Geronimo, who had watched the fight from a bluff nearby, refused to surrender to Maus. In March, Geronimo agreed to discuss a surrender with Gen. George Crook, but to no avail. Nelson A. Miles would be the general who secured the chief’s surrender in September.

Crook called Crawford’s death an “assassination.” Secretary of War William Endicott termed the deed “utterly unjustifiable.” Congress demanded reparation and punishment of the guilty parties, but on April 1, Mexican President Porfirio Díaz countered that his troops did not recognize Apaches as U.S. troops. The Mexican authorities also claimed the Apache scouts were guilty of stealing livestock. (On January 10, Crawford had captured Geronimo’s stolen stock, some 300 horses, and he was in possession of it during the attack the next day.)

In 1887, Mexico returned the animals taken from Maus and gave a draft of $500 to cover their use. The U.S. Army awarded the Medal of Honor to Maus in 1894 for his actions in the fight. As for the fate of his compadres, Lt. William Shipp was killed in the battle for San Juan Hill in 1897, while Tom Horn was hanged for murder in 1903.