Queen of the Cowtowns 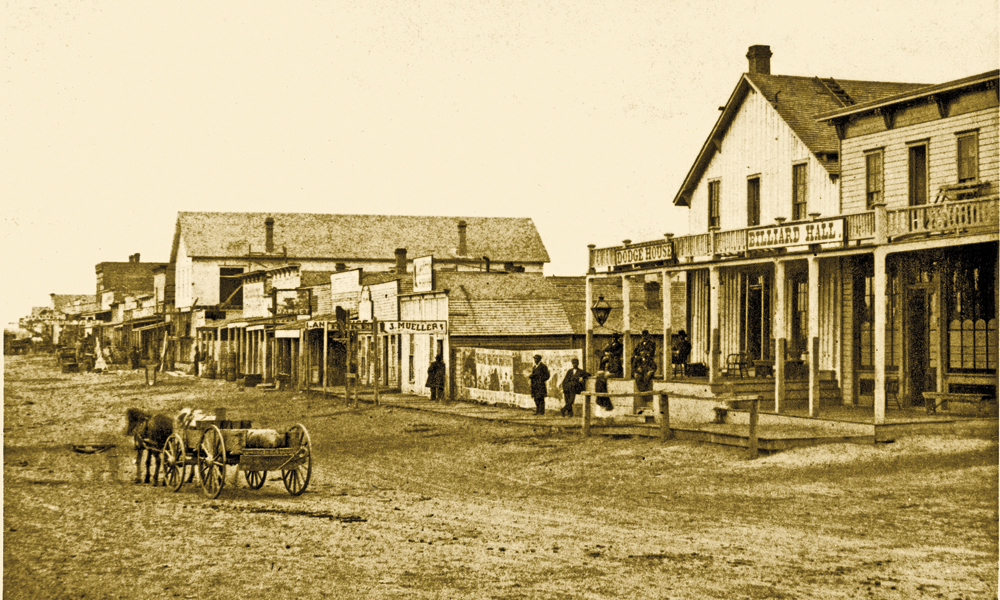 When Dodge City’s founders staked out their vision for a town near Fort Dodge in 1872, its first business was George Hoover’s bar. He sold whiskey for 25 cents a ladle across a wood plank. The settlement was built just ahead of the tracks of the Santa Fe Railway, and the railroad made it a center for buffalo hunters such as Bat Masterson. In a few years, the Great Western Trail up from Texas made it a thriving cattle shipping hub in the mid-1870s.

Wild cowboys battled tough lawmen, birthing the legend of Dodge as a violent “hell on the plains.” But like most legends, it needs tweaking.

“We had gun control. You couldn’t wear guns north of the railroad tracks,” says George Laughead Jr., retired president of the Ford County Historical Society. “We had a few deaths and some famous ones. But with thousands of drunken cowboys here, it was a pretty good record.”

Held in late July and early August, the celebration opens with the Boot Hill Bull Fry & Bash featuring calf fries, a Kansas delicacy. What exactly are calf fries? Hint: The event is nicknamed “the testicle festival.” When you eat that, smile.

Dodge City’s compact size makes exploring it on foot ideal. The town offers a self-guided walking tour that Sandie Masden of the Convention and Visitors Bureau calls “our version of the Hollywood Walk of Fame.”

Visitors pass 31 sidewalk medallions commemorating famous residents, real and fictional. Among the latter are characters from the TV Western Gunsmoke, which aired from 1955 to 1975 and was set in Dodge.

The walking tour also passes statues of Wyatt Earp, Doc Holliday and El Capitan, a huge bronze of a Texas longhorn that anchors downtown. A fourth statue commemorating the cowboy, created in 1927 and on the National Registry of Historic Landmarks, stands atop Boot Hill.

The tour’s most recent addition is a medallion near the Santa Fe Depot dedicated to Fred Harvey, the hospitality king who, beginning in 1875, operated hotels and restaurants along Western railroad lines.

After a renovation, the depot has been returned to its 1898 grandeur. Don’t miss the second-floor space decorated like a Harvey hotel room.

The Boot Hill Museum ranks among the town’s best sites. It offers historic photographs, reconstructions of buildings along old Dodge’s Front Street and a 250-gun collection with 18 buffalo hunter rifles and frontier flintlocks.

Tourists can also walk through the original Boot Hill Cemetery, used from 1872 to 1878, and imagine the lives of those resting there. One of the last graves to be dug holds Jack Wagner, who died April 9, 1878, in a shootout with Bat Masterson’s brother, Ed, a city marshal killed in the same gunplay.

The Masterson connection continues at the Mueller-Schmidt House Museum, “the finest residence in the West” and Dodge’s oldest home still in its original location. Built entirely of limestone, it features four rooms decorated exactly as they appeared in the 1880s.

On the night of October 30, 1881, four days after the OK Corral bloodletting in Tombstone, with his friend Wyatt Earp sweating a murder rap, Bat attended Dodge’s biggest social event, a housewarming party at the newly constructed mansion.