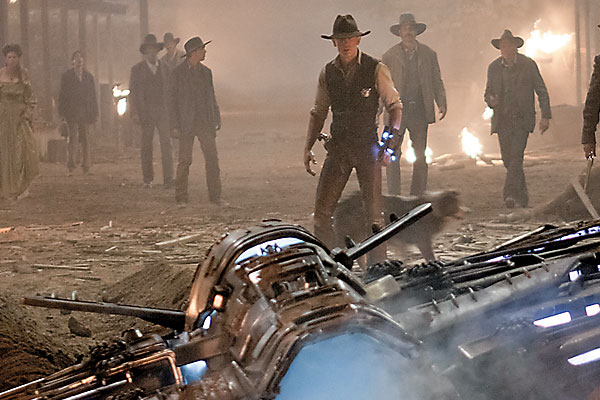 Whether the aliens have much interest in deadly Daniel Craig or leathery old Harrison Ford has not been established, but cowgirls are wanted, definitely.

Creepy visitors from Out There have reportedly been hazing farmers, cowboys and cows since the late 1800s. Kansas farmer Alexander Hamilton lost a heifer to a spaceship right in front of his eyes, in April 1897. Journalist, professor and Fortean scholar Max McCoy tells us Hamilton was none too pleased by his close encounter.

“Hamilton told the Woodson County Advocate that … he saw a great cigar-shaped airship slowly descending, brilliantly lighted and that everything inside was clearly visible, including two men, a woman and three children,” McCoy says. “The ship was powered by a great turbine wheel, he claimed, and Hamilton said, ‘They were jabbering together, and I could not understand a word they said.’”

Hamilton might have been describing a Québécois family in a newfangled Jules Verne-type blimp, blown terribly off course. But the story takes a creepy turn. The “hideous” family, as he called them, held a red cable, which was wrapped around the neck of an understandably distressed three-year-old heifer that was also tangled up in fence wire. Hamilton loosened the wire, and the cow was pulled up, 300 feet, into the ship.

“Hamilton rode out the next morning hoping to find some trace of the cow,” McCoy says. “A farmer in the next county found the ‘hide, legs and head in his field,’ but no tracks.” These invaders were clearly not French-speaking Canadian Steampunkers.

This barnstorming airship, or others like it, harassed a good many people that spring, in Oklahoma, Iowa and other parts West. But the dismembered cow seems to be unique to Kansas.

Flashing lights, weird meteors, saucers, as one was described in Texas, and even a UFO crash are part of the history of the 19th century. Men who spent a great deal of time outdoors would see all kinds of curious things, on the ground and in the air.

Yet compared to the alien visitations recorded in Old West yellow journalism, the invasion in this summer’s Cowboys & Aliens is a full scale, Independence Day-type incursion. If Geronimo might be thought of as a terrorist, these unfriendly, people-stealin’ critters are the ultimate imperialists.

Manifest Destiny of the Third Kind is at the heart of the graphic novel upon which the movie is partly based, but the film is also about comeuppance: these alien invaders are to the civilized settlers of 1873 Arizona what we were to the American Indian population—specifically, the Apaches. In the film, just as the natives had to adapt to the invading technology—horses and guns—so too does the local populace have to adapt to the aliens’ hardware, which accounts for Jake Lonergan’s (Daniel Craig’s) mysterious wrist gizmo.

“The idea that they could overcome by using the alien technology certainly gave them hope,” says Scott Mitchell Rosenberg, the comic book creator of Cowboys & Aliens (as well as Men in Black). “The truth is that once the humans overcame their differences and banded together, they could have succeeded with or without the new technology.”

The Apaches play a role in the picture, but for all intents and purposes, Longergan is as much a warrior as the bravest brave—as it was said of Paul Newman’s Apache-raised character in 1967’s Hombre, he’s wearing a lot of hard bark.

Some Westerns fans, though, have admitted they’re skeptical of this genre-crossing film (see p. 6). Today’s movie critics can be of the same ilk, as nothing gets the forks and knives going in the critical establishment than an old-fashioned discussion of genre. Yet back in the glory days of the pulps, writers would cross the street all the time, one day writing a Western, the next a Romance, the next a Supernatural tale. Robert E. Howard created Conan the Barbarian for Weird Tales in 1932, but he also wrote scary stories about cowboys and about Puritans. Leigh Brackett wrote Science Fiction pulps before Howard Hawks scooped her up to help out with his crime noir adaptation of Raymond Chandler’s The Big Sleep and, later on, for the 1959 Western Rio Bravo. Her last screenplay was for Star Wars: The Empire Strikes Back, a Westerns-influenced Space Opera.

Rosenberg tells us making the decision to cross genres for his graphic novel was natural for him. “As a kid, when my friends and I would play Cowboys & Indians, we eventually got bored and began adding aliens and other creatures to the mix. We used to dress up and act out huge battles with our figurines. I don’t think it gets any more natural than that.”

No matter where Westerns fans fall on genre crossing, they should appreciate how everybody involved went into Cowboys & Aliens to make a serious Western first and a Science Fiction movie second. Steven Spielberg, who hasn’t yet made a Western of his own, narrated a screening of classic Westerns, including 1956’s The Searchers, for director Favreau and others involved in the production. Ron Howard also produced Cowboys & Aliens, and he made one of the best Westerns of the last 20 years, 2003’s The Missing.

Considering the cast, the budget and the expertise that went into making this picture, nobody can say it doesn’t have heart.