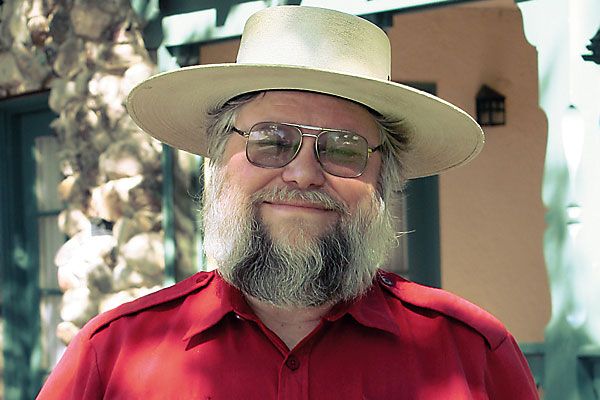 My favorite Old West artifact at the Clark County Museum is a southern Paiute bow and arrow collected in the Vegas Valley about 1900. It is a sophisticated piece of work, sinew backed wood, and it shows the technology and sophistication of the local Indians and their adaptation to the desert environment.

What history has taught me is we should understand the motivations of people in the past, who worked hard to create what we have today. This doesn’t mean we can’t make changes, but if we don’t understand why something is the way it is and we change it, we may make old mistakes all over again.

My favorite Nevada Western is The Professionals, filmed in Clark County. Lee Marvin’s and Woody Strode’s antics on Fremont Street are a great sidelight of the movie’s history.

How I got connected with Pawn Stars is still not fully clear to me. Someone recommended me when the show was looking for an expert to look at Lt. Gen. Griswold’s West Point uniform coat. When I was asked whether I could appraise the coat, I said no. I could authenticate it and talk about what to look for in it, but I could not give a price for it. We filmed anyway, and I do believe they liked how I came across. The Harrisons have since become friends, and I enjoy working with them.

I don’t give prices on Pawn Stars because I run museums, not shops. Museums deal with the real, with artifacts and education, not prices. We don’t sell the collections.

So far, my favorite artifact I authenticated for Pawn Stars was the Civil War field desk used by Company C of the 10th Indiana Volunteer Infantry. It was such a tremendous collection, I was glad the family retained it.

When I was eight, I built museums on my patio in Santa Ana, California. I would pick up various knickknacks around my house and create displays. Then I would drag my brother and sister (both younger than I), and my friends through my museum and give them tours. Eventually everyone came to recognize a certain gleam in my eye and wouldn’t stick around.

As a fourth-generation Orange County, California, resident, I learned stories about the days before the county existed. For example, Pio Pico, the last Mexican governor of California, was so well respected that when legal disputes arose, his word was considered as good as a judge’s ruling by Americans and Californios alike.

One Clark County street name dating to the Old West era is Gass. Octavius Decatur Gass was a miner in Eldorado Canyon near the Vegas Valley, and, with two partners, he bought the Las Vegas Ranch in 1865.

The craziest story I heard while researching the county’s centennial in 2009 was that the streets in Henderson were laid out as curves to disrupt any Japanese pilots planning to attack. Yet the Basic Magnesium plant was the largest building for miles; a pilot would have had to be blind to not be able to see it.

My favorite Old West haunts in Nevada are Gold Point and Rhyolite. Gold Point is a great “ghost” town, though it has about 20 inhabitants now and many of the buildings are privately owned and still standing.  Most of Rhyolite is gone, but I enjoy the history and often head over there to walk among the memories.

As the administrator of Nevada’s Clark County Museums, Mark Hall-Patton is fairly recognizable. That’s not just because he’s also an authenticator for the History Channel’s Pawn Stars show. He’s easily spotted in his trademark Amish hat and red shirt. His Amish hat pays homage to the farm auctions in Dover he attended as a graduate student at the University of Delaware. (His black one is Amish made, but his straw is an Atwood, to replace a straw Amish hat that blew into a hot pool in Yellowstone.) His red shirt is a nod to his fellow members in the E. Clampus Vitus historical fraternity; they wear red shirts at clampouts (meetings).