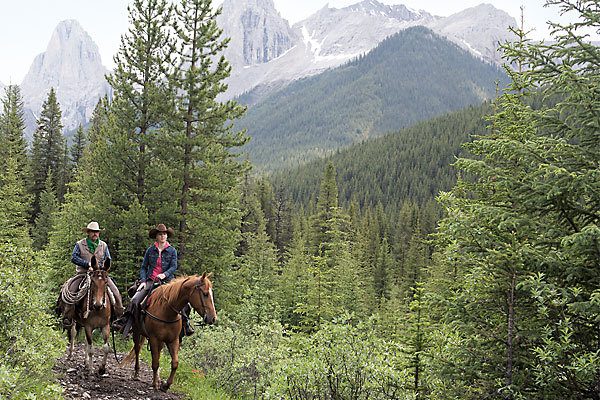 Deep snows had forced him and his pack train to turn back in April 1827. In May, he tried again and during that eight-day journey, he lost two horses and a mule, but he made it across.

Seven years later, small communities developed in the remote Sierras, with the settlers depending on hard working packers to bring them supplies. After the 1848 gold strike in California, packers were essential in getting supplies to gold mining camps and boomtowns that sprang up quickly in the Sierras.

Following the Gold Rush, the Sierras saw a recreational rush, with travelers seeking out vacations, a tradition that continues today. Mules continued to transport the food, gear and belongings. Johnny Alberta Jones, a Yosemite area packer since he was a 17-year-old kid in 1935, extolled the virtues of mules in his memoirs, Following the Bells. “You can push a horse across dangerous ground, but you have a time getting a mule to go where he shouldn’t. They sense everything, a fracture, a bad place, a cave-in. They just won’t go.”

While filming the Alberta episode for Equitrekking, I had my own Sierra-like packing experience in the Canadian Rockies. As I warmed myself by the fire one night, the camp cook lamented her worry about one of her packers, who was hours late. He was, after all, leading a string of six mules, each loaded with 150-240 pounds of supplies, along the mountain trails in remote Banff on a moonless night.

Fortunately, her packer made it to camp late that evening, but the experience drove into my mind how the life of a packer is, and always was, one fraught with danger and hard work. You have to be physically and mentally tough, enjoy living in the wild by yourself for long periods of time and manage sometimes stubborn livestock.

When I returned home, full of curiosity as to how the packing life might differ from Jedediah Smith’s day, I dialed up expert packer Craig London of Rock Creek Pack Station. He has spent his life leading travelers into the High Sierras, and he also teaches packing to University of California riding groups. His father, who recently died, led travelers into the eastern Sierra beginning in 1947. When London was born in a hospital in Bishop in 1954, he spent only a few days in civilization before being whisked off into the mountains, where he would learn the art of being a good packer from his father and other area mountain men.

All of the functions of a packer today are the same as they were in the 19th and 20th centuries, London admits. Packers still move mules, people and their gear where they want to go; they’re still out for a week or a couple of weeks at a time, traveling 25 miles a day in rugged country.

When it comes to the life of a packer, London believes that it might just be harder today than it was for early-day packers. Sure, he says he is considering bringing along a Nook to store his maps nowadays (and, yes, he is lucky he has maps as a reference), but one reason he’s bringing that Nook is to store the mounds of regulatory information that he and other packers must adhere to when working in wilderness areas. No one but nature was telling Smith where he could or could not go.

Yet just like the Sierra packers who have come before him, London relishes those times when he can ride out into the mountains and be free from civilization.