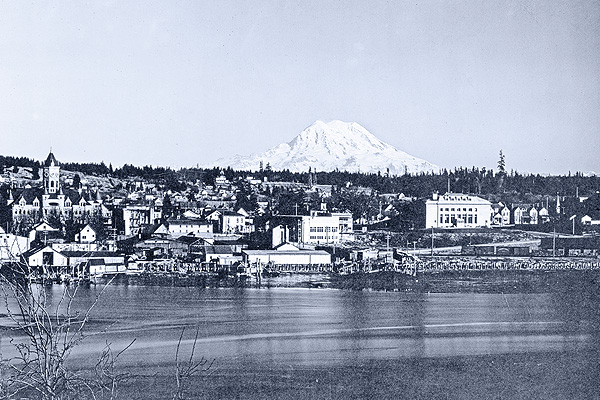 North Dakota, South Dakota, Montana and Washington mark their quasquicentennials—125 years since achieving statehood—this year and it is a good time to visit a few key places that represent their history.

These are big states, with big histories so I’ve chosen just a few of the great places to visit in each of them. The truth is,  you could spend a week or more in any one of these states and barely scratch the surface.

North Dakota and South Dakota came in to the Union on the same day— November 2, 1889—by virtue of the fact that the much larger Dakota Territory was divided. The North Dakota capital of Bismarck is a perfect place to begin your exploration of the 39th state. North Dakota will mark its statehood anniversary August 16 on the grounds of the State Capitol in Bismarck, but the bigger commemoration will take place on the historic date of November 2, with the grand opening of the newly updated North Dakota Heritage Center, also in Bismarck.

North Dakota history ranges from the life and times of Sitting Bull, to George Armstrong Custer and the 7th Cavalry, to writer Louis L’Amour and the modern day oil boom that is “Rockin’ the Baaken.”

Bismarck is a city divided by the Missouri River but a good place to visit anytime. The early Indian and military history of the area is brought to life at Fort Abraham Lincoln State Park and the Mandan Village, On-A-Slant, which has reconstructed lodges that show visitors what the village would have been like when occupied by the original inhabitants beginning in about 1575. Situated in a protected area with the Missouri River to the east and a cut bank on the north, On-A-Slant was the home of Sheheke, a Mandan chief born about 1766. Sheheke met explorer David Thompson in 1797 and also provided aid to Meriwether Lewis and William Clark when they reached the area in 1804. By that time the Mandans had abandoned On-A-Slant (doing so after a smallpox epidemic in 1781) and relocated to a new village upriver.

Original buildings at Fort Lincoln include the home where George and Libby Custer lived prior to his last ride into history. Other structures that have been restored at Fort Lincoln include the Commissary. Special events at the fort include an opportunity to meet re-enactors portraying Gen. and Mrs. Custer. You can have root beer with the general on the Fourth of July, and visit Mrs. Custer the following week.

From Bismarck, travel west on I-90 to Medora, a small town with big history. This is the location of Theodore Roosevelt National Park, created on land where Roosevelt once operated a ranch, and today you may see wild horses along with the wide-open landscapes of Roosevelt’s time. In Medora eat a fondue steak meal cooked on a pitchfork in open vats of boiling oil, then attend the Medora Musical, a representation of signature events in Roosevelt’s life.

For another view of North Dakota, travel north through Williston, center of the oil development underway in the state. Because of this energy development, plan your visit far ahead since lodging may be difficult to find. The journey through Northern Plains history is worth it if you visit Fort Buford State Historic Site, where Sitting Bull surrendered after his years of exile in Canada, and then continue to Fort Union Trading Post National Historic Site. Sitting Bull lived the remainder of his life in North Dakota (when he wasn’t traveling with Buffalo Bill’s Wild West) and was buried in the state, until his body was stolen and moved to Mobridge, South Dakota.

I’m jumping off in South Dakota, the 40th State, in the Black Hills at the Old Style Saloon #10 in Deadwood, which takes you back to the rough-and-tumble days of the gold rush, and where you can still walk across a sawdust covered floor, play a hand of poker, test your luck at the Blackjack table or enjoy a mighty fine meal. In nearby Lead, work is underway to restore the Historic Homestake Opera House. If you have a chance to attend a performance, the venue’s atmosphere is as exciting as if you were one of the performers on the stage.

From these gold rush towns meander through the Black Hills to visit the signature sites: the Crazy Horse Memorial, which has changed significantly during the past 25 years, and Mount Rushmore National Memorial, which also sports a new look at the base, though the signature sculptures of the presidents seem unchanged. The Needles Highway through Custer State Park is arguably the most interesting route you can take in the Northern Plains. If your scheduling works out, try to attend the annual buffalo roundup that takes place in the state park in late September.

A wagon train re-enactment from the territorial capital in Yankton to the state capital of Pierre will mark the South Dakota quasquicentennial in September. This 17-day journey will involve history talks and programs in communities along the way. When in Pierre visit the South Dakota Cultural Heritage Center then cross the Missouri and visit the Verendrye Site, where in 1913 a group of school kids found a lead plate that when translated said, “In the twenty-sixth year of the reign of Louis XV, the most illustrious Lord, the Lord Marquis of Beauharnios, 1741, Pierre Gaultier De La Verendrye placed this.” On the back historians found the words:  “Placed by the Chevalier Verendrye, Louis La Londette, and A. Miotte. 30 March 1743.” The site gives a panoramic view of the Missouri River, the route taken by Verendrye, and later by Lewis and Clark.

If you are in South Dakota late in the year, head south to the site of Wounded Knee, where Big Foot’s band of Lakota was attacked by the 7th Cavalry on December 29, 1890, a year after statehood for South Dakota, and the last major attack on an Indian tribe during the Indian Wars period.

On November 8, 1889, Montana Territory became the State of Montana—the 41st star on the U.S. Flag.  Helena became the territorial capital in 1875 and continued as Montana’s statehood capital city.
To appreciate Helena, take a trolley tour that shows you the old homes, and tour the Montana Historical Society, where you can see original art by
C.M. Russell. Another of Russell’s signature pieces is located within the State Capitol itself.

Claiming to be the “Richest Hill on Earth,” Butte, located a couple hours west of Helena, attracted hard rock miners of many nationalities, who equally worked the mines and drank in one of the city’s 212 saloons (in 1893), but lived in segregated neighborhoods. The architecture of the city today still reflects the varied influences, from the opulent Copper King Mansion that belonged to Marcus Daly, to the no-longer-in-use-but-under-renovation Dumas Brothel, to the small houses, tightly packed together that served as homes for the miner families.

At the World Museum of Mining you can view the Berkley Pit (no longer in use and how mostly filled with water), and see a diverse collection of buildings, artifacts and equipment all related to Butte’s mining heritage.

A trolley tour will give you a good overview of Butte’s history highlighting the homes of mining magnates and the businesses that served the copper miners. Anaconda, just west of Butte, made national news
in 1903 when the Socialist Party of America elected a mayor, treasurer, police judge and three councilmen for the first major Socialist victory west of the Mississippi. The Anaconda Copper Mining Company initially tolerated the radicals, but when a Socialist mayor was also was elected in Butte, the company pushed back, ultimately forcing organized labor out of the area.

Washington State, created on November 11, 1889, as the 43rd State was a land first utilized by the powerful Hudson’s Bay Fur Company and was later influenced by the Northern Pacific Railroad, and ultimately by world war.

The Hanford Reach Interpretive Center now under construction in Richland, (scheduled to open the Fourth of July), brings together the natural and cultural history of the Columbia Basin with exhibits related to the flora and fauna of the Hanford Reach National Monument. The history involves the early people of the Columbia Basin tribes and the Hanford Engineer Works—the Manhattan Project that led to development of the atomic bomb. The center will share this story by focusing on how the land was transformed during the 20th century.

For a much older story travel to Toppenish where the Yakama Nation Heritage and Cultural Center has exhibits  about important leaders from a variety of tribes, and many details related to the Yakama. The Center also has an excellent collection of Yakama basketry. .

Across the Cascades visit Fort Vancouver National Historic Site, which dates to the early settlement of the area by the Hudson’s Bay Company. This post was a key to development of the Pacific Northwest, instrumental not only in the fur trade, but also key to the early settlement of the region. A tour of the Washington State Capitol and the State Capital Museum in Olympia is a great way to finish the tour and get an overview of Washington State history.

Candy Moulton is a road warrior. Every once in a while she hangs her hat at home near Encampment, Wyoming.