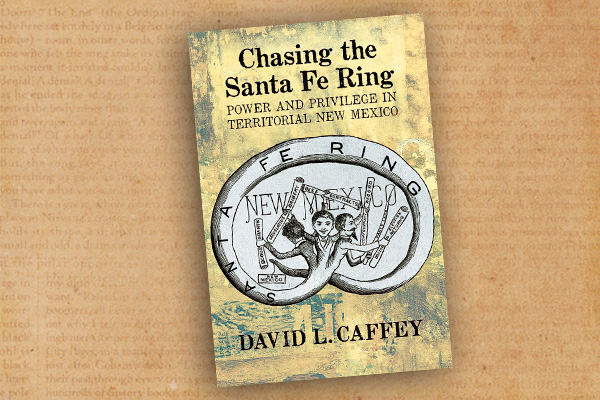 Corruption, fraud, intimidation, murder and assassination, all weapons of power and greed the politicians of the Santa Fe Ring used during their reign over the New Mexico Territory from approximately 1865 to 1912.

The former director of New Mexico’s Harwood Library and Museum, Caffey spent nearly a decade researching the elusive history and alleged participants in Santa Fe’s most notorious political empire, which he concludes in his introduction is why there has been a “reluctance of historians to tackle the subject.” Caffey is exhaustive in his research and conclusions, including very detailed footnotes and an exhaustive bibliography. He also adds two very valuable appendices: a chart of all known and suspected participants in the Santa Fe Ring by how many times their names appear in credible, published sources; and, a very enlightening, mini-biographical section on core and secondary participants in the political machine.

Caffey’s research is very deliberate and exact, with careful use of primary sources, as well as the conclusions of well-known historians’ syntheses of popularly known topics such as: Spanish and Mexican land grant history and the Lincoln War, including Billy the Kid. His decision to abdicate to others the primary research on these well-documented subjects allows the author to remain focused on the actions of the Santa Fe Ring in regards to land grant corruption and Lincoln, et al.; but, it also leaves the reader wanting more from the author on these highly charged subjects. Caffey’s conclusions on the bloodshed in Lincoln are so carefully framed, mild to the point as to not to offend anyone or create controversy:  “The involvement of alleged Ring members in the Lincoln County War was not indicative of a deliberate conspiracy, undertaken with premeditated malice and centrally managed by a boss or a ruling clique. Rather, the struggle proceeded as a series of reactions driven by a mulligan stew of economic interests, jealousies, grudges, and spontaneous displays of manly aggression.” Indeed.

The final chapters of Chasing the Santa Fe Ring are equally satisfying and frustrating. Caffey provides an excellent synthesis of the mythmakers, historians, novelists, filmmakers and television producers who have created the imagined idea of the Santa Fe Ring and its participants. His conclusions on the Ring are a cautionary tale of corrupt—and often deadly—politics in New Mexico history. Yet, between the lines of his careful summations is the trepidation of a transplanted Texan who knows all too well that caution is the better part of valor when making accusatory judgments on the deeds of the dead amidst the still living descendants of the infamous Santa Fe Ring.