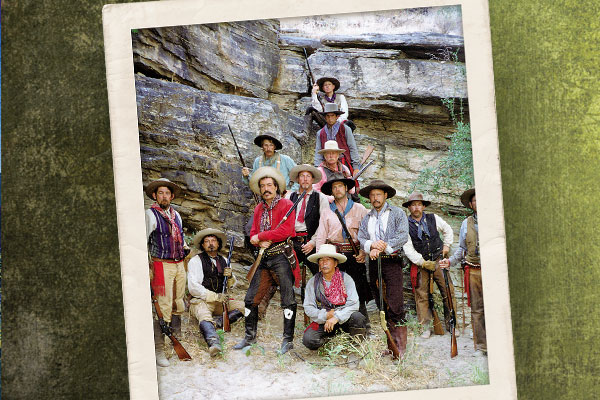 On Wyatt Earp’s arrival in Tombstone in the 1993 movie Tombstone, the preening and corrupt Cochise County Sheriff Johnny Behan bragged about the town’s fashionable citizens. Behan personified the duplicitous nature of the silver-mining boomtown: well-dressed, but of dubious virtue.

Like the residents of its legendary namesake, the movie Tombstone was stylish and took liberties with the story of the O.K. Corral gunfight. The film retells the troubles Wyatt Earp and Doc Holliday encountered during the 1880s in Arizona Territory. The costumes were historically accurate, deeply symbolic and influential on contemporary Western fashion.

The drab wardrobes in many Westerns mirror the sepia-toned photos of denizens of the frontier West. In Tombstone, color helped establish character. Researched by writer and director Kevin Jarre, the attention to detail in costumes and gear helped the cast get into character and milk the story and the script. Even the extras in the movie wore faithfully copied period attire. Some of his research led Jarre and costume designer Joseph Porro to outfit the cast in designs and colors seen on subjects in historical art. “A lot of the shirts and hats were based on clothes depicted in paintings by [Frederic] Remington and Charlie Russell,” says cowboy actor Buck Taylor, who played “Turkey Creek” Jack Johnson in the movie.

Wyatt Earp, his brothers Virgil and Morgan, and their tubercular dentist, gambler and gunslinger friend John H. “Doc” Holliday were intentionally dressed in black hats, coats and vests that convey grim intent. “If you look at the dark clothes, they look like undertakers,” observed director George Cosmatos on the director’s cut DVD. The self-righteous Earp clique depicted in Tombstone was a stark, black-and-white departure from the white-hatted heroes of earlier Westerns.

By contrast, the Earps’ nemeses, the Cowboys, were dressed in a hodgepodge of bright cotton flannels, calicoes and earth-colored drills, twills and woolens. “Curly Bill” Brocius’s bold red cavalry bib-front shirt is a good example. It was a direct copy of a period shirt, says actor Powers Boothe, who played the Cowboys’ leader.

The Cowboys’ red sashes were a theatrical nod to modern gang colors, according to Taylor. They were probably inspired by the sash worn by Jarre’s hero, Wild Bill Hickok. Generally based on the Victorian, military and frontier styles available in the 1880s, the major characters’ clothes in Tombstone are well-tailored and clean, unlike clothes depicted in other historically or culturally correct movies or television series about the Old West.

Early Westerns glamorized and perpetuated the ideal of the American cowboy. They inspired the creation of Western clothing as a distinct fashion category and spawned the Western apparel and accessories industry. Tombstone’s influence helped reintroduce Western to its Victorian heritage in the Earps’ starched “undertaker” mien as well as its informal frontiersman roots represented by the Cowboys’ rowdier garb.  Between the excellent script, the superb acting and the dazzling wardrobe, it’s no wonder Tombstone continues to resonate and inspire 20 years on.