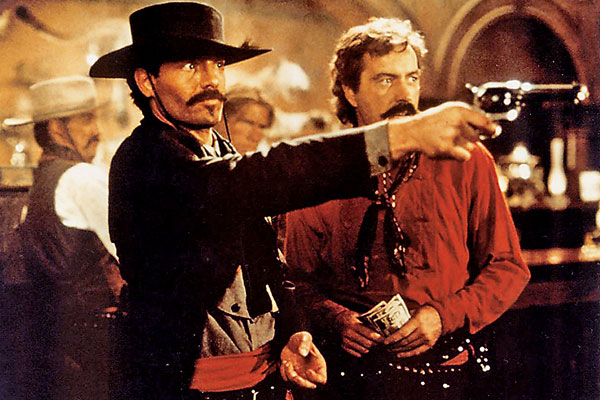 Michael Biehn will revisit his role as Johnny Ringo in Tombstone as part of his guest appearance at the True West Railfest in Durango, Colorado, from August 15-18. In advance of his visit, we called him up and asked him a few questions:

1. How does a kid from Lake Havasu City, Arizona, get in the movie biz?

I got a drama scholarship from the U of A [University of Arizona]. They paid my tuition and books, but I partied too hard and never studied. I flunked out, but I didn’t want to go back to Lake Havasu with my tail between my legs, so I went to Hollywood. I got an agent, and I did a hell of a lot of work, doing commercials, modeling. My fee was $60 an hour. I had worked construction, as a hod carrier, in Lake Havasu for 90 cents an hour, so I knew I was in the right place.

2. How did you get the part of Johnny Ringo?

My agent called me and sent over the script for Tombstone. I loved it. I thought it was great. Like any actor, I wanted the best part, and that was to play Doc Holliday. But my agent said it looks like they’re going to offer that role to Val Kilmer. In that case, I told him, I want to play Johnny Ringo. And I got the part.

3. What’s your take on Kevin Jarre?

Kevin was very passionate and very specific. He wanted the movie made exactly how he wanted it made. I’m not sure Kevin understood that it was a collaborative effort. He wanted it his way. He was working with a lot of people who had a lot of ideas on how to make the picture better. He was very rigid when it came to how he wanted it. He wanted it shot it like a John Ford film, very straight ahead and old school, but Disney did not want him to shoot it that way. Kevin wouldn’t listen to anyone. It ultimately got him fired.

4. So how was George Cosmatos as a director?

Disney brought George in to make the film look good. He had no story sense. Jim Jacks cut the movie to 95 minutes. I give credit to him for saving that movie. Because the movie looked so good. A lot of great actors were on that movie. Cosmatos never once said to me, “Maybe you want to try to add a little anger here.” I felt very sorry for Kevin Jarre. They turned his screenplay into a good guys vs. bad guys film. When the rewrites started coming in, I started getting upset. They made up the fact that Ringo killed a priest and shot him between the eyes, but the studio wanted distinct good guys and bad guys. Kevin’s script was much more gray. The Earps were on the make and basically went down to the fight with the Cowboys with much more firepower and a shotgun, and basically massacred the Cowboys. That was lost in the new version of the film.

5. Do people quote lines to you from the movie?

Yes, people come up to me all the time and say, “All right, Lunger. Let’s do it.” I also get the line, “I want your blood. And I want your souls. And I want them both right now!”

6. What’s your favorite scene that was cut from the movie?

There is a great scene where Henry Clay Hooker [Charlton Heston] is letting Earp stay at his ranch. We [Cowboys] pull up, and we want him, and Hooker says no way. And there’s a scene where I get off my horse, and I go nose to nose with Charlton Heston, saying, “We want Earp.” And Heston is going at me, and I say, “Well, we’re going to take him whether you like it or not.” All of that got cut.

I think Dances With Wolves was brilliant, and I think if we hadn’t come out first [Tombstone came out in December 1993 and Costner’s Wyatt Earp came out in June 1994], his Wyatt Earp may have done better. I think our version is flashier and a little more fun. [Costner’s] version of the story was rooted in the reality of the story, and it’s too long.

8. One of the most classic scenes in Tombstone is when you twirl your gun in front of Doc Holliday. How hard was that to pull off?

I get asked to do the gun spinning from time to time, but it took a lot of practice; you really have to do it over and over to get it right. It was certainly a difficult scene and took months and months of rehearsal and practice. When we did it, my hands started sweating. Those .45s are heavy. Dana Delany and Bill Paxton were sitting right below me. I didn’t want to hurt them with a gun, and that was kind of nerve racking, but we did it.

9. Do you have a favorite Western?

My favorite Western is Unforgiven.
“It’s a helluva thing, killin’ a man. Take away all he’s got, and all he’s ever gonna have.”

I just did a video game called Far Cry 3: Blood Dragon; it’s the latest installment. I do the voice Rex Colt, kind of going back to the stuff that Bruce Willis used to do, and it’s supposed to be a total hoot. Ubisoft developed it. I’ve had at least 60 kids come up to me just this past week saying, “Awesome!”