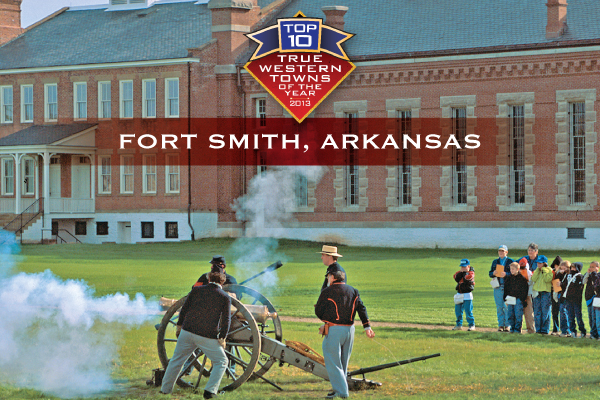 The Old West seems a tangible thing in Kaycee. The red rock buttes and rolling grasslands look just as they must have 150 years ago. A little east of Kaycee, you can still see segments of the Bozeman Trail, which connected the Oregon Trail to the Montana
gold mines.

The ranching town, population 263, plans to celebrate its centennial this summer, beginning with a barbecue and concert on July 20, when residents will display items that will be placed inside the town’s time capsule.

The main event on August 10 will feature a parade, a Sheepherders Rodeo at Harold Jarrard Park and another concert.

When you visit Kaycee, keep in mind that today’s peaceful scenery belies the area’s bloody past.

Old Fort Reno was established as Fort Connor in 1865 to protect Bozeman Trail travelers from Indians.

The Johnson County War, one of the most significant and still controversial range wars in the Old West, raged in the area in 1892.

And not far west of Kaycee is Hole-in-the-Wall Country, where legendary outlaws Butch Cassidy, the Sundance Kid and the rest of the gang once hid out.  (Local lore has it that Cassidy was a good neighbor and trustworthy friend.)

The region’s first homesteader set up his ranch along the Powder River. His brand was KC.

Before long the area needed a post office. Residents wanted KC, but the government required them to spell it out.

Kaycee’s City Hall, which now serves as the town library, is the oldest building in town (it was originally built about a quarter mile west of town and later moved to its present location). Its walls are made of hand-hewn logs nearly two feet thick.

The oldest building actually constructed in town is the Gordon Ellis house, a log cabin behind the Red Horse Station. Because goats were once kept in it, everyone knows it these days as the “Goat House.”

The town’s first store was the Powder River Commercial Company, established in 1897. That building is now Grange Hall.

The good folks at Hoofprints of the Past Museum offer tours to historic places in the region, including the site of Nate Champion’s shoot-out, Hole-in-the-Wall, the Outlaw Caves and the Dull Knife Battle site. Be sure to plan your visit to Kaycee accordingly though, as the museum is open only from Memorial Day weekend through October.