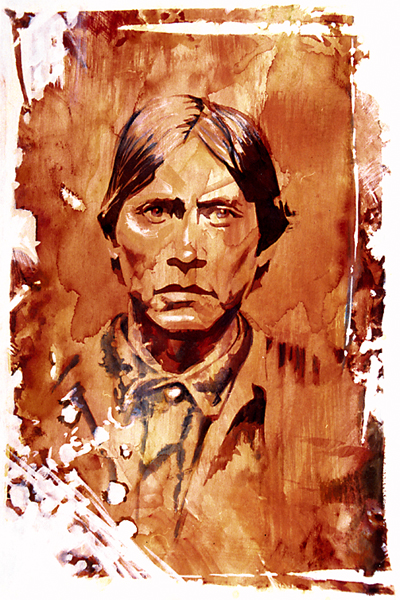 Absent from duty for five days, the Apache Kid, along with four other Apache scouts under his command, ride single file into the headquarters of the San Carlos Reservation (near Globe, Arizona). The Kid was acting chief of scouts while Al Sieber was away at Fort Apache and the White River Subagency.

Upon his return to San Carlos, Sieber has summoned the Kid after hearing he killed another Apache in an alcohol-fueled family feud. (The offending liquor? Tizwin, a traditional Apache drink made from the heart of the mescal plant.)

Walking up to the scouts, Sieber says, “Hello Kid.” Returning the greeting, the Apache Kid and his scouts dismount, with their weapons in their hands.

“Give me your rifle,” Pierce orders the Kid. The Kid complies. Pierce demands his belt, too, and the Kid gives it up. The captain places the rifle against Sieber’s tent and the belt in a chair, and then demands the same from the other four scouts. They, in turn, give up their arms and belts.

Pointing in the direction of the guardhouse, the captain barks, “Calaboose!” (Spanglish for jail). Several of the Indians pick up their belts and remove their knife scabbards.

“Look out, Sieber!” Pierce yells, “They are going to shoot!” Sieber kicks the guns toward the tent as two shots ring out, one right after the other. Sieber and Pierce dive into the tent as bullets rip through the twin openings, from front to back.

Sieber grabs his weapon and runs out to engage the shooters. He fires at a mounted Apache who has just fired at him, but before he can fire again, a .45-70 slug tears into his left leg below the knee, breaking the bone and knocking him flat. He crawls back into the tent as the Apaches disappear into the twilight.

Caught Between the Military and the Deep Blue Sea

Two companies of cavalry take the field within 15 minutes of the fight. They trail the Apaches for 15 miles along the San Carlos River (the Kid’s party includes about 17 members; some are on foot, as they were unable to find a horse in time). From the river, the fleeing Apaches turn south, through Aravaipa Canyon.

When the Apaches reach the San Pedro River, one of the renegades, believed to be a  Yaqui, kills William Diehl near Mammoth Mill, 60 miles north of Benson. The band  steals two horses and then strikes again, killing Mike Grace, whose body is found northwest of Crittenden.

After a feint toward Mexico, the Kid’s band camps high on the Rincon Mountains (east of Tucson), where soldiers surprise them, capturing all of the Apaches’ horses and supplies.

After 24 days of running, the Kid surrenders. He is then tried, along with four scouts, by a military court.

The Kid and his scouts are found guilty and sentenced to death by firing squad, but Gen. Nelson Miles objects to the ruling and asks the court to reconsider its verdict.

On August 3, at Camp Thomas, the reconvened court resentences the five to life imprisonment, which Miles reduces to 10 years. Under heavy guard, the convicted scouts, including the Kid, are delivered to Alcatraz, in San Francisco Bay, to serve their time.

Upon military review of the case, which reveals prejudice among officers on the jury, the Apache Kid’s sentence is overturned, and he is sent home after serving 16 months.

Angry Arizona civilians convince the courts that the military had no jurisdiction in the case. By the close of 1888, the Kid and his comrades had been ordered back to San Carlos.

A new trial is held in Globe, and Al Sieber is the chief witness against the Apaches. Not surprisingly, the jury declares all the defendants guilty and the judge sentences them to seven years in Yuma Territorial Prison.

The Apache Kid and other prisoners are gathered for transport to Yuma, via Riverside and the rail station in Casa Grande. Al Sieber offers Sheriff Glenn Reynolds the use of an army escort, but the sheriff declines. It costs him his life.

It is a rough, two-day stage ride from Globe to Casa Grande, Arizona. Sheriff Glenn Reynolds is transporting the Apache Kid and eight other prisoners who will be put on the train in Casa Grande to take them to the Yuma penitentiary. The weather is cold and wet, and snow is in the forecast.

On the second morning, four miles out of Riverside (see map, below), the stage encounters Ripsey Wash, followed by a steep incline. The sheriff and his hired guard, William “Hunkydory” Holmes, get out of the stage, along with seven of the prisoners. With only the driver, Eugene Middleton, and two prisoners aboard (including the Kid), the horses struggle but successfully make it up the soggy and steepest part of the ridge. It is snowing.

As Middleton and his coach clear the grade, he hears men scuffling behind him, then two shots (at first he’s not alarmed because the sheriff had been target shooting earlier). When  Middleton looks back, though, he can’t see anything through the brush.

In a moment, a Mexican prisoner, Jesus Avott, frantically runs up, explaining that the Indians are going to kill him. He asks Middleton what to do, and the driver tells him to get on the stage. As Avott raises his foot to get in, one of the Apache prisoners, Bach-e-on-al, runs up, brandishing Holmes’ rifle. He fires, hitting Middleton in the face, and the driver topples to the ground. The newly freed prisoners bring up the keys and unchain the Kid as they debate whether to crush Middleton’s skull with a rock (popular legend says the Apache Kid stops them because Middleton had shared a cigarette with the Kid the night before at Riverside Station).

Grabbing ammunition, money and whatever else they can use, the escapees cut loose the horses and scatter into the wilderness.

Incredibly, Middleton is still alive and makes his way back toward Riverside for help.

A subsequent posse is thwarted by a snowstorm that obliterates the fugitives’ tracks.

Trudging up the steep grade (left), Sheriff Reynolds is walking in front of the prisoners. He carries a shotgun over his arm, but his pistol and gunbelt is stored under his long coat, which is buttoned up against the cold. When two of  the Indians rush the sheriff, they quickly overpower him by pinning his arms. Meanwhile, the two Apaches walking in front of Holmes, who is bringing up the rear, turn and throw a blanket they are carrying over his head. They grab Holmes’ rifle from him and fatally shoot Reynolds; Holmes dies of a heart attack.

The Prisoners are Photographed Prior to Their Bold Escape

After a group of Apache defendants is found guilty in a Globe courtroom, they are photographed (above) before they depart for the Yuma Territorial Prison. Note that the Apache Kid (standing, second from right) is still wearing his brass reservation tag on his left breast pocket.

When the Apaches get out of the stage near Ripsey Wash, Bach-e-on-al (front row, center, indicted under the name Pash-ten-tah) allegedly slips free of his handcuffs. He and El-cahn (standing, far left) overpower the sheriff as another two Apaches attack Holmes, who reportedly dies of a heart attack before being shot. Hos-cal-te and Say-es (standing, second and third from left) are later recaptured and die in prison. Not shown is prisoner Jesus Avott, sentenced to one year in prison for selling a friend’s horse for $50.

While transporting the prisoners via stage, Sheriff Reynolds (right) carried a Colt .45 and a double-barreled shotgun loaded with buckshot. In addition to turning down the offer of a scout escort (Reynolds allegedly told Al Sieber “I can take those Indians alone with a corncob and a lightning bug.”), the sheriff started the trip with his horse, which he left at Riverside. Had he been on horseback, he may have averted the disastrous outcome.

Hunkydory Holmes (bottom right) had a lever action Winchester and a pistol. Middleton also carried a pistol. On the ill-fated journey, Holmes allegedly took it upon himself to cheer up the prisoners by sharing his original poetry. Here’s a few lines:

Oh, I am a jolly miner lad,

Resolved to see some fun sir,

To satisfy my mind

To Phoenix town I came sir

Oh, what a pretty place

And what a charming city

Where the boys they are so gay

And the squaws they are so pretty

Military and civilian authorities launched a colossal manhunt for the escapees. By the summer of 1890, all the fugitives had been killed or captured—all except the Apache Kid. By 1892, the State of Arizona offered a $6,000 reward for the Kid, and several officers were given roving commands to bring in the Kid, dead or alive. No one ever claimed the reward.

Eugene Middleton survived his face wounds and ran the Riverside stage station for several years before moving to Globe where he owned a successful apartment building. He died in 1929 of natural causes. He was 68.

Some historians believe that the Kid escaped into the Sierra Madre Mountains in Old Mexico where he lived out his life.

In 1937, a Norwegian explorer and anthropologist, Helge Ingstad, heard that renegade Apaches still lived in Mexico. Traveling deep into the Sierra Madres, Ingstad claimed he found a woman, Lupe, who was thought to be the daughter of the Apache Kid.