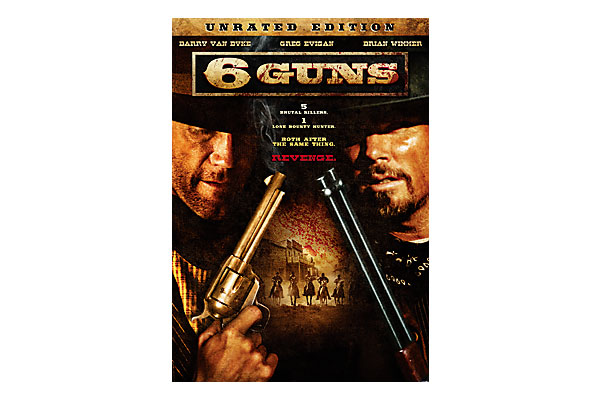 Two Westerns, both independents and both about bounty hunters, will be available on DVD within a couple of months of each other.

The first one is 6 Guns, which is available now, and the other, due out on July 6, is Six Gun. (We call tell you more about the second picture when we get a look at it.)

6 Guns features a cast of seasoned professionals, which makes sense since about half the actors are the descendants of Dick Van Dyke.

Dick’s grandson Shane Van Dyke directed the movie and has a small part in it, his father Barry Van Dyke is the lead, playing bounty hunter Frank Allison, and his brother Carey Van Dyke also acts in the picture. This is a showbiz family, and they’ve all worked in movies and on TV
for years. In fact, anybody nostalgic for Diagnosis: Murder, the 1993-2001 mystery series on CBS that starred Dick and his kids, might enjoy seeing the troupe at work together.

Anyone who would like to see Greg Evigan—B.J. from NBC’s 1979-81 series B.J. and the Bear—as a grizzled sheriff in a fictitious version of Bisbee, Arizona, might want to see this movie as well.

Be advised, however, that those hoping for a mild Western adventure starring the good-looking Van Dyke kids, or a Western comedy along the lines of Barry’s brief 1983 CBS series Gun Shy, should know that this is a hard, revenge-driven Western, where an ex-peace officer and his kids are graphically murdered in the beginning, and his wife Selina is gang-raped.

The movie picks up six months later, when Selina (Sage Mears) has become the town drunk. Thankfully we don’t see much of that because the actress is having a little trouble with the part, since she mainly just stumbles around and drains a bottomless bottle. When she’s shown a kindness by Allison, a well-known bounty hunter who’s passing through, she decides to straighten up and convinces him to teach her to shoot a gun. He should have given her a shotgun, or one of those sawed-off jobs they gave James Caan in 1967’s El Dorado; it makes the training sessions much shorter.

Meantime, we see the border-bound villains from the opening scene killing a posse that was stupid enough to let the bad guys get the drop on the members (again, please, give somebody a shotgun). Lee Horn (Geoff Meed) is the leader, and by far the nastiest of the lot. Meed wrote the script and wisely gave himself the juiciest bad guy part, and for good reason—he’s perfect for it. Personally I hope he keeps it up; this guy could carry a bad-guy-driven Western by himself.

6 Guns is a cut above most independent straight-to-DVD Westerns because the values are decent, the Spaghetti Western-flavored music works, the direction is assured and the acting, for the most part, is solid, especially the performances by Meed, Evigan and the older Van Dyke. These actors ought to make a more ambitious picture next time. The film also needed more heart and a little less plot-slogging.