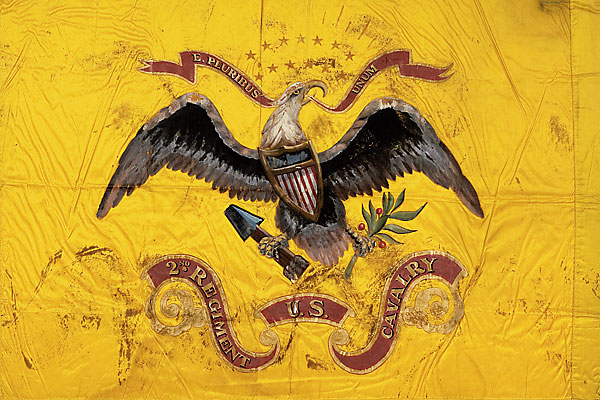 The two crossed sabres insignia, cutting edge up, marked the hats of two different cavalrymen from the beginning and the end of the Indian Wars.

The Indian Wars relic was a blue wool forage cap that dates between 1851, when the insignia first appeared on the cap, and 1895, when the cap’s design was modified  from the relic’s square brim to a round brim. The cap was worn by both Civil War regulars and by volunteers, who were battling the Indians as they built up frontier forts to protect the settlers streaming in at larger numbers with every gold discovery; soldiers who saw post-Civil War action against the Indians also wore it.

Rough Rider George H. Sharland had donned the other hat. The crossed sabres insignia branded his Pattern 1889 campaign hat during the private’s service in the Spanish-American War from May 1, 1898, to September 30 of that year. Eight years earlier, the Lakota’s ghost dance triggered the end of the Indian Wars, bringing upon that tribe unexpected violence from the U.S. Army that would come to be known as Wounded Knee.

These hats were among the cavalry collectibles featured at two reputable firearms auctions—Rock Island Auction’s April 30-May 2 sale in Moline, Illinois, and Cowan’s April 28-29 auction in Cincinnati, Ohio. At both auctions, collectors showed a surprising interest in the Indian Wars, with many of the lots selling above the estimated value.

“This auction proved that uniforms and accoutrements from the Indian Wars can command prices generally associated with the Civil War and earlier American conflicts,” says Jack Lewis, director of Cowan’s Historic Firearms and Militaria Division. “Collectors from across the country recognized the rarity of this material, and [put in] bids aggressively.”

Included here are some of the top cavalry lots, mainly from the Indian Wars era, which historians often mark as starting in 1850, with some fairly bloody battles at the close of the Civil War. Military clashes with Indians certainly existed long before then, but by 1865, gold-, land- and commerce-thirsty settlers desired the very same land that they had once deemed so inhospitable it was only fit for Indians. Their push westward inspired government treaties to corral onto reservations unwilling and angry Indians who were fighting to try to preserve their way of life.