What’s in His Head? 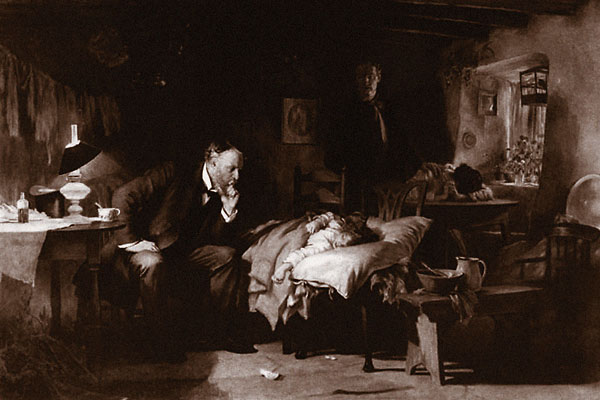 In his 1910 treatise, Medical Education in the United States and Canada, Mr. Abraham Flexner reported the following startling words to the Carnegie Foundation for the Advancement of Teaching:

“…very seldom, under existing conditions, does a patient receive the best aid which it is possible to give him in the present state of medicine…. For twenty five years past there has been an enormous over-production of uneducated and ill trained medical practitioners. This has been in absolute disregard of the public welfare and without any serious thought of the interests of the public.”

Such was the status of physician education, as late as 1885, a condition that was likely much worse during the earlier part of the 19th century in the Old West.

In contrast to Mr. Flexner’s depressing conclusions, consider the imposing image of the Victorian physician in the famous 1891 painting The Doctor, by Sir Luke Fildes. The physician sits at the bedside of a young child, probably in the critical stage of recovery or in the relapse of illness or infection during the pre-antibiotic era.

The parents depicted in this painting are placing the greatest trust in this physician that can be conferred upon another human being, namely, the responsibility of preserving the health of their young child. The frontier doc in this painting graphically epitomizes the wisdom, commitment and determination that should be expected from a professional who has taken on such a responsibility. Notwithstanding his moral credentials, exactly what expertise could a frontier doc offer his patient based upon his formal education?

Consistent with Mr. Flexner’s report, frontier docs possessed an astounding and rather disconcerting spectrum of “preparation.” As committed as the doctor may have been, his extent of formal training ranged (commonly) from almost nothing at all to (very rarely) one to three years of medical education, post-graduate specialization and apprenticeship with a learned practitioner.

In his August 2002 article, “A Tribute to the Frontier Doctor,” Fredrick Boling noted that in the Old West, “Opening a medical school required only a hall and a faculty that was usually a group of local physicians who would conduct lectures for a fee. Students attended these lectures by buying tickets for the courses. Other than having cash to buy tickets, there were no educational prerequisites for any student seeking admission. Some were nearly illiterate; consequently oral exams were more commonly used to test the student’s knowledge….” Boling also reported: “Most states prohibited dissecting human corpses, which required students to provide their own cadavers— frequently obtained by hiring body snatchers to steal them[!]”

As late as 1910, Mr. Flexner indicated that entrance requirements to medical colleges ranged from “Less than a common school education” (at the Kirksville, Missouri, American School of Osteopathy, established in 1892) to “Two years of college work, strictly enforced” (at the University of California Medical Department at San Francisco, established in 1872).

The bottom line is that most patients on the frontier had little knowledge about the training and education of their attending physician. The physician’s reputation, purported experience and bedside manner dominated matters of formal credentials and the exhibition of real (or even false) diplomas.

One may then wonder whether the physician in Fildes’s painting is also in the grips of an intellectual impasse and diagnostic bewilderment. Was he really a benefit, a detriment or irrelevant to the patient’s recovery?

After 34 years as a physician, it is my personal opinion that the failure of medical efficacy can be likened to the failed potential of an empty weapon. The combined calibers of experience and judgment are useless without the ammunition provided by the accrual of education and training.

My medical aphorism (slogan) certainly applies to the practice of medicine today. While watching a re-run of Gunsmoke, I am, therefore, inclined to try my hardest to catch a glimpse of the diploma (if any!) in the office of “G. Adams, Surgeon and General Practitioner!”