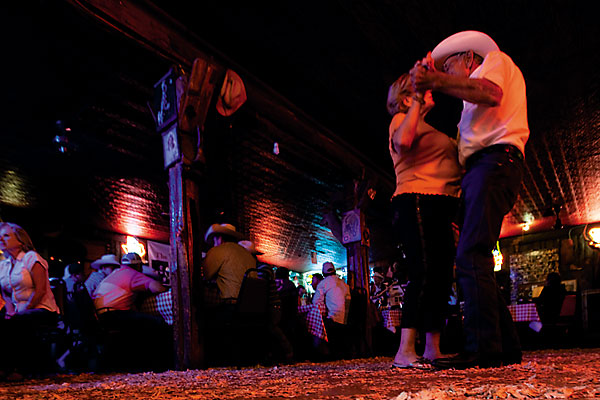 When you ask Genie Strickland, a fifth-generation Banderan, how a town of 957 people can produce so much Western heritage entertainment, she breaks out into a smile.

“From the history books on Bandera we have faced Indian raids, floods, droughts, boll weevils and failed crops,” she says. “The  Hill Country offers hard scrabble land less suited for agriculture but offers beautiful vistas just suited for Western life. We make it because we come together in hardship and friendship.”

That Bandera spirit also lodges easily in the hearts of new residents, such as Melissa Benge, who moved here from Dallas with her husband three years ago. While walking along Main Street, she says she saw “horses hitched up to hitching posts. Trucks and motorcycles in front of the honky tonks. Chuckwagons cooking on Main Street. Longhorns perched on corners ready for picture taking. This is what drew me to this charming little town.”

The welcome sign is always hanging for both long-time and new residents. Here’s how they get their kicks in Bandera.

Good Cowboy Bars: Arkey Blue’s Silver Dollar Saloon is the oldest and has been in several movies; the 11th Street Cowboy Bar is the biggest and has a fabulous stage and outdoor venue; and the Longhorn Saloon is a great venue on the banks of the Medina River.

Steak Night: Bring your own steak and throw it on the grill! You get to cook it like you like it, and then purchase your sides, such as potatoes, salad or beans. Steak night is at 11th Street Bar on Wednesdays and at the Longhorn Saloon on Thursdays. Great outdoor evening, filled with friends and great music.

Favorite Local Cuisine: The O.S.T. Restaurant has been in business since the 1930s (it even has a John Wayne Room!). The bar features saddles for bar stools, and the restaurant is well known for its chicken fried steaks. For breakfast, the pancakes are as big as your head!

Best Bookstores of the West: The Bandera General Store carries books about Texas and the Hill Country, while Gunslinger Dry Goods offers a good cowboy selection.

Historic Site Most Schoolchildren Visit: The Frontier Times Museum is a treasure chest of history. Built by J. Marvin Hunter, this little museum is the jewel of Bandera. The colorful area history showcased here includes oddities such as a two-headed goat. (True West became a sister publication of Hunter’s now-defunct Frontier Times magazine, when Joe Small bought it in 1955.)

Local Radio Personality: Red Steagall’s syndicated radio program all about the cowboys. Red will be inducted to our 2010 Texas Hall of Heroes.

Cowboy Up in July: “National Day of the American Cowboy” features a ranch rodeo that is a preliminary to the South Texas Ranch Rodeo Finals.

Who’s the person in Bandera everyone knows? World Champion Trick Roper Kevin Fitzpatrick. He has traveled all over the world representing the State of Texas and Bandera.

Preservation Project: The Western Trail—same trail made famous by Larry McMurtry’s book Lonesome Dove. Bandera’s marker was placed on this trail in 2004 when the townsfolk re-enacted the cattle drives by organizing a nearly 50-day trail ride from Bandera to Dodge City, Kansas.